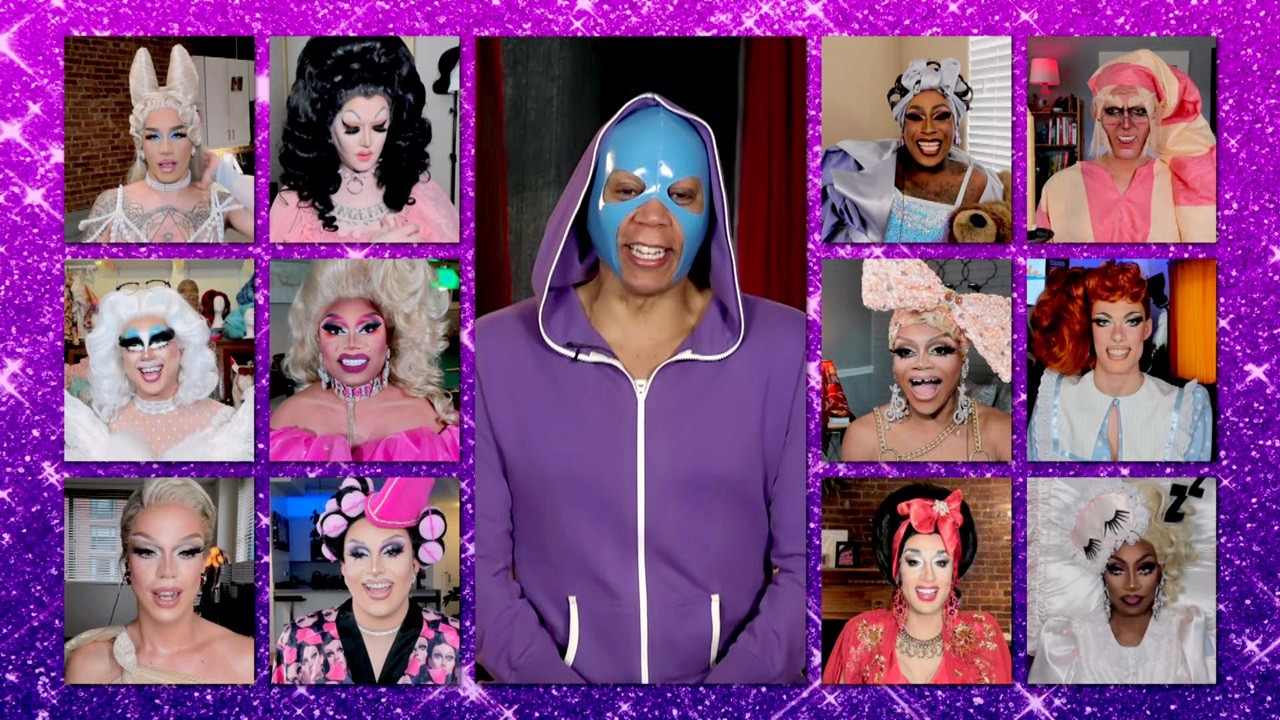 Well, another queen has joined the RuPaul’s Drag Race ranks of Bebe, Raja, Sharon, Bob, Bianca, Yvie and drag other luminaries and won the title of America’s Next Drag Superstar.

While it lacked the glitz and glamour of the finales we have become accustomed to, this unconventional wrap to the season brought with it plenty of charisma, uniqueness, nerve and talent as Gigi Goode, Crystal Methyd and Jaida Essence Hall battled for the crown.

Let’s take a look at some of the highlights from the finale:

With one last chance to bring their best looks to the (virtual) runway this season, the queen-testants turned it out. Everyone looked amazing- from Dahlia Sin’s green ensemble (paying tribute to her fierce brocc-ally look?) to Widow Von’Du’s spider ensemble and Nicky Doll’s violet harlequin outfit, the queens get 10s across the board. (And a special bonus for Crystal’s pinata outfit, which was just so much fun.

Who is that masked drag queen?

One thing we have learned during the quarantine is that Ru can’t paint herself. During last week’s reunion, Ru donned a latex facekini and now this week, he paired his all-black ensemble (with a cool fedora) with a black, rhinestone-embellished mask. He made a point to thank the crew and said the people he missed the most were the grips, but you would think he would have said Raven because no one can beat Ru’s mug better.  Twitter definitely took notice.

As a huge fan of Crazy Ex-Girlfriend, I was delighted to see Rachel Bloom as a guest judge on season 12. I was equally delighted to see her pop up during a segment about the “fans” of the show, which also included testimonials about how Drag Race has helped entertain during the quarantine. Rachel gave birth to her first child, a daughter, just a few weeks ago and said she was happy to get “dolled up” for the occasion and show off her milk-filled ta-tas. Permanent guest judge for life? We also get tributes from Kim Petras, Thandie Newton, Robyn, Daniel Franzese, and Adam Lambert (looking hawt.)

A tribute to Jaqueline Wilson

Among all of the finale hoopla, it was so nice to see a touching tribute to RuPaul’s Drag Race co-executive producer Jacqueline Wilson, who passed away last year. Jacqueline was a driving force behind the show, having been a part of it since the second season. Alyssa Edwards, Bob the Drag Queen and Latrice Royale were among the queens who shared kind words and remembrances and it was a very lovely moment on the show.

Even though everyone was broadcasting from different locations, we still got lots of warm and fuzzy moments with the top three as Ru (in an eyeball look, for some unknown reason ) had the tic-tac/podcast chat with each of them. We got to meet Crystal’s family during her chat, and her parents are just the best, especially her Dad, who adorably and awkwardly read off a cue card to express his pride in his son. But, best of all, we got to meet Crystal’s grandmother, who is possibly the sweetest abuelita I have ever seen, giving a short but sweet message of support to her grandson.

Last year’s Miss Congeniality, the wonderful Nina West, “crashed” the reunion to announce who earned the title this year. But, before she did, she chatted with the iconic Dolly Parton, who was (obviously) looking fabulous in lockdown. Dolly joked that she was really Leslie Jordan in drag and gave Nina a resounding “meh” when asked about her reunion crashing look. I love Dolly so much. Hopefully, this will lead to a guest judge spot?

If you haven’t heard, Nina passed the torch to this year’s Miss Congeniality, the much-deserving Heidi N Closet. (Congrats, Heidi!) The pride of Ramseur, North Carolina, shared a PSA to help us through the age of the coronavirus and it’s classic Heidi.

Bring Back My Top Three

The final challenge kicked off with Gigi, Jaida and Crystal giving us “face, face, beauty face” (™Bebe Zahara Benet) and lip syncing Ru’s song “Bring Back My Girls” right in front of the camera. All three of them looked amazing and gave us everything. It was a three-way tie for me.

After the group lip-sync, the queens each perform a full lip-sync production number. Crystal, maintain her brand of eccentric and creative, gives us a somewhat literal interpretation of Nelly Furtado’s “I’m Like a Bird” and we wouldn’t expect any less than crazy costumes and makeup as Crystal plays both mama and baby birds.

Gigi takes on the LYSFL

Gigi Goode gave us a black and white fantasy as she performed aha’s “Take on Me.” She definitely gets an A+ in set design, recreating the comic book world of the video. Her hair is a little Cruella DeVil-ish, but as always, she brings the fashion and delivers a solid performance.

Jaida gets up (and down) for her LYSFL

I don’t know about you, but Jaida took the crown with this performance. Ru could have just packed it up after this one. Jaida took on the song ‘Get Up” by Ciara and Chamillionaire and tore up her living room while looking flawless with a black sequined (and fringed) bodysuit, blond wig and stunning makeup. I couldn’t take my eyes off of her.

Ru was supposed to whittle the queens down to a final two, but, when faced with this much talent, couldn’t bring himself to choose, so all three queens took part in the final lip sync, putting their spin on “Survivor” by Destiny’s Child. Crystal gave us another unique creation, kind of looking like a beautiful. Exotic flower, Gigi gave us Dorothy from Wizard of Oz in her reveal and Jaida served up a fierce orange look with a removable cape revealing a look that is distinctly  superheroine. It was kind of amazing, and I’m glad all three got this chance to shine.

In the end, Ru crowned the fabulous Jaida Essence Hall as the season 12 champion and America’s Next Drag Superstar. As unusual as this season has been, with controversies and coronavirus, it brought us 12 amazing new additions to the Drag Race universe. Condragulations to Jaida and all the best to Gigi, Crystal and the queens of season 12.

Who knows when we’ll see season 13, but we’ve got Drag Race All-Stars 5 coming this week to keep you entertained and to reveal who will join Chad, Alaska, Trixie, Monét and Trinity in the winner’s circle. Until then, remember that if you can’t love yourself, how in the hell are you gonna love somebody else? Can I get an “amen”?