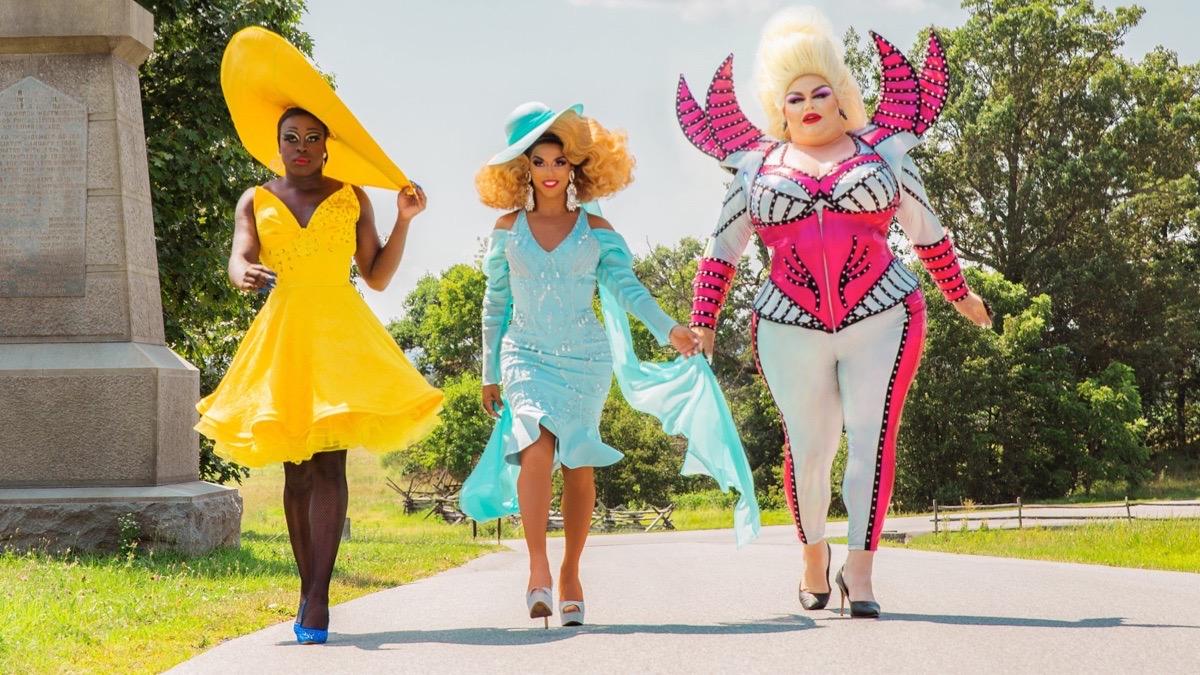 FKA Twigs Talks ‘Unmeshing’ From Robert Pattinson, Prince Harry Is Up to No Good, Kristen Stewart Strikes a Pose and More: ENDNOTES

It’s been another jam-packed week with the queens from RuPaul’s Drag Race UK making beautiful music together and lots of news from some of our favorite Drag Race alums. Let’s jump in the wayback machine and catch up with all of the latest news.

In news that should come as a complete surprise to no one, RuPaul’s Drag Race UK has been renewed for a second season. On Wednesday, World of Wonder and BBC Three confirmed that the new season will debut in 2020.

In a statement, RuPaul said, “I want to thank the BBC and all our fans for their overwhelming support of RuPaul’s Drag Race UK. This season’s queens proved that Britain’s Got Charisma Uniqueness Nerve and Talent and I want to see more! Here’s to another season of love, laughter and light!”

Congrats to Ru and the DRUK team.

As always, checking in with our favorite Drag Race podcasts, Mano Agapion discusses the girl group challenge and more with Gay of Thrones writer Mark Rennie and John Flynn, co-hosts of the “Two Old Queens” podcast on this week’s “Drag Her.” Willam and Alaska, veterans of girl groups themselves, share some insight on this week’s episode of Drag Race UK and dish some “Hot Goss” over at Forever Dog.

Who better to discuss the Day at the Races runway on this week’s episode of DRUK than Raja and Raven? Showcasing their best equestrian-themed attire, the two toot and boot this week’s fashions on the latest “Fashion Photo Ruview.”

Although she was the second queen to sashay away on Drag Race UK, Scaredy Kat has been one busy kitty. She and her girlfriend and Pussy Kat have released a new video for the song “Nine Lives” and damn if it’s not a catchy tune.

I will admit I am a complete fangirl for Lady Bunny, who I had the privilege of meeting a few weeks ago. The lady is not only a drag icon, but a great interview subject, as evidenced by her chat with Monét X Change on her Build series, “The X Change Rate.”

If you’re a fan of haul videos and Willam, you’ll love this video where she unboxes treats from makeup and clothing companies, lending her always hilarious commentary along the way.

If Queer Eye and To Wong Foo had a baby, I think it would look a lot like the upcoming HBO series, We’re Here. On the unscripted show, Shangela, Bob the Drag Queen and Eureka O’Hara travel to small towns across America to organize one-night-only drag shows with the local residents. In an Instagram post, Shangela said of the new series, “[We’re] empowering local communities with the magic of drag! It’s Emotional. Theatrical. Oh, it’s gonna be a SHOW!” She added, “Never give up on your dreams y’all. And don’t be afraid to WERQ HARD for what u want! HALLELOO!”

The shows six-episode run kicks off in 2020. In a statement, Nina Rosenstein, executive vice president of HBO programming, shared that “Drag is about confidence and self-expression,” and asserted that, “We are so thrilled to showcase the transformative power of the art form with our audience.”

Always the busy queen, Shangie is also set to guest star on an upcoming episode of the Riverdale spin-off Katy Keene. According to The Wrap, she is playing a character named Devereaux, described as transforming from “internet personality to A-list drag queen.” Additionally, “Her greatest talent is flaunting this wave of success. Her ruthless competitiveness is what keeps her on top.” She’s set to appear on the series’ sixth episode, and we can only hope she becomes a recurring character, because Shangela makes everything better.

My pick for video of the week is comedienne/podcaster/Nailed It host Nicole Byer getting a drag makeover from Monique Heart and Trixie Mattel. Not only is it fascinating to watch Nicole get “Trixi-fied”, the champagne-fueled conversation amongst the trio is comedy gold. I could watch this on a loop all day.

Speaking of makeovers, Raven shows a beautiful actress/model (who doesn’t need a stitch of makeup…yes, I am jealous) how to create a dramatic metallic look using affordable, high intensity eye shadows on the latest episode of “Wet n’ Wild Presents”.

Another person I love to watch apply makeup is Drag Race UK’s Blu Hydrangea. On this week’s “Blu’s Beats”, the pride of Belfast shows how she created her sparkly, equine, elegant look from the Day at the Races runway.

Ariel Versace is back with a new “day in the life” vlog, doing a little day makeup, giving a friend a 15-minute makeover and getting some gorgeous nails (I want these, but feel they may be impractical for office work.)

The truth is out there, and Jinkx Monsoon is here to discuss aliens on the latest episode of “Cool Mom.”

Jinkx is again teaming up with fellow Seattle queen Ben DeLaCreme for a new holiday show, titled “All I Want for Christmas is Attention.” During an interview withAM2DM, Jinkx described the show as an “esoteric, masturbatory, political rant that doesn’t take itself too seriously.” The tour kicks off on November 29 in Washington DC and tickets are available at jinkxanddela.com.

Speaking of Christmas, the wonderful Miss Coco Peru is here to share her holiday wish with you. If I had a yard and a propensity for decorating, I would totally do this.

Yvie Oddly challenges Monique Heart to a quick “drag on a dime” challenge on “Yvie’s Odd School”. These two queens, who both admitted they shopped the Forever 21 clearance section for their drag fashions before they made it big, put together some fun looks from inexpensive materials (and Yvie laughs a lot, which is very contagious.)

Want to see six minutes of Raja being iconic? Check out the video for her new song “Moodbored”, which is sure to be a dance club sensation.

Lastly, as a Spice Girls fan 4 life, I had to post the latest video from Melanie C. The song, “High Heels” is amazingly catchy (and has a great, positive message to boot) and the video features some fabulous drag queens. Check it out.

That’s it for this week’s wrap up. Join us next week for more from your favorite Drag Race queens!

FKA Twigs Talks ‘Unmeshing’ From Robert Pattinson, Prince Harry Is Up to No Good, Kristen Stewart Strikes a Pose and More: ENDNOTES