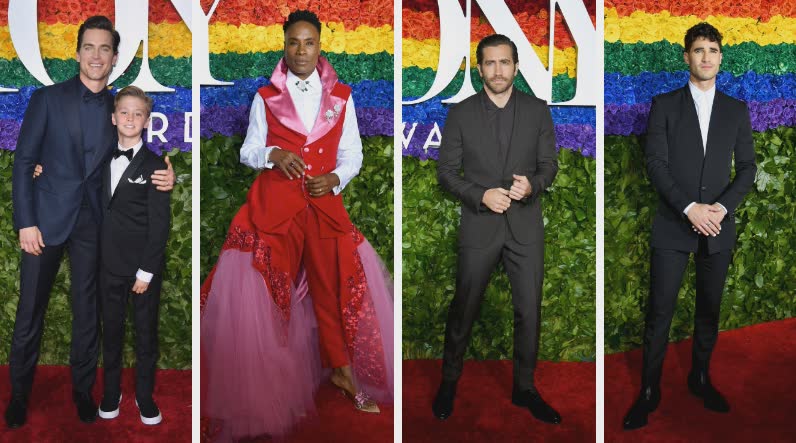 The 73rd Annual Tony Awards at Radio City Music Hall took place last night (June 09, 2019) in New York City, and while the ratings were down if you missed James Corden‘s opening number, you missed big!

That said, thanks to a little thing called YouTube, you can watch the opening extravaganza below.

The show brought out a bevy of celebrities from the theater world and from Hollywood, and we are featuring the hottest men who hit that red carpet for the event.

So without further adieu, check out the guys:

Matt Bomer and his son

If they were giving out awards for fashion, Billy Porter would have won for best use of curtains.

However, that was not a category at the 2019 Tony Awards.

Check out the list of winners from the event below:

Best Revival of a Musical: “Oklahoma!”

Best Revival of a Play: “The Boys in the Band”

Best Direction of a Play: Sam Mendes, “The Ferryman”

Best Leading Actress in a Play: Elaine May, “The Waverly Gallery”

Best Featured Actress in a Play: Celia Keenan-Bolger, “To Kill a Mockingbird”

Best Scenic Design of a Play: Rob Howell, “The Ferryman”

Best Costume Design of a Play: Rob Howell, “The Ferryman”

Groom Comments That ‘2020 Hasn’t Been the Best Year,” Then Lightning Strikes

Best Choreography: Sergio Trujillo, “Ain’t Too Proud: The Life and Times of the Temptations”