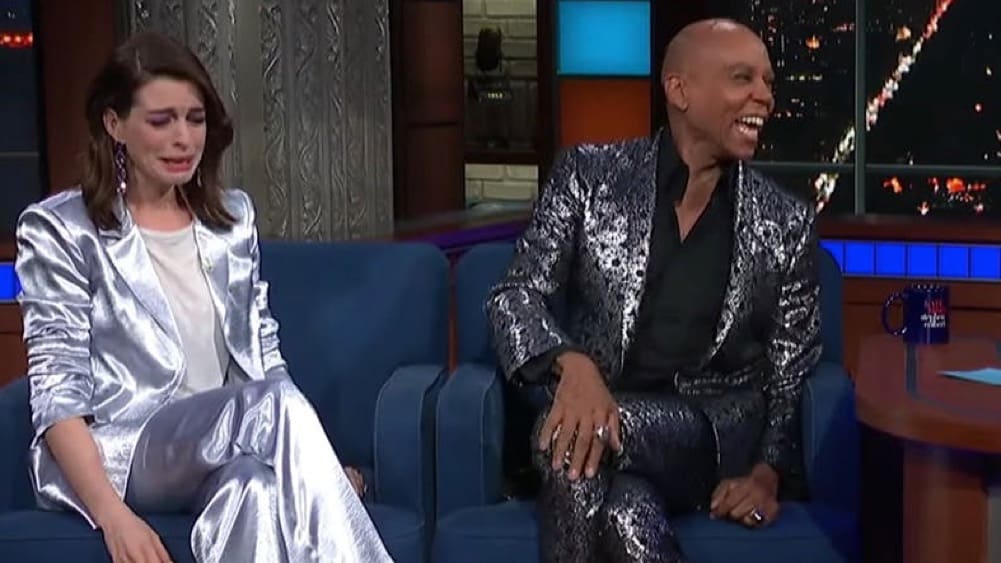 What happened when Anne Hathaway got to meet her idol, RuPaul? She burst into tears.

Anne was on Stephen Colbert’s Late Show to promote her new movie, The Hustle when Colbert asked her what she likes to watch on TV.

After listing Game of Thrones and Killing Eve as her TV obsessions, Anne explained: “There is a show I watch to make me feel better, Drag Race. Oh my god, I love that show so much!”

Colbert asked Hathaway if she had anything she wanted to say to RuPaul, and she meekly replied, “Just say, I love you.”

That’s when Cobert said that Mama Ru was already there and she came prancing out on stage.

“Darling, you are the winner of this week’s challenge. Shantay, you stay,” RuPaul said to Hathaway.

Hathaway was in tears, and Colbert asked her if she had a favorite moment from RuPaul’s Drag Race.

“Monet X Change’s entire journey, and just how amazing she was in season 10,” she said.

“And then the growth between season 10 and [All Stars 4] and how she stepped her pussy up.”

“I felt that because since I’ve been an actress I felt like I’ve learned how to step my pussy up. And now I’m [expletive] up and I’m just thrilled for her and me and you and you.”

Crying on national television wasn’t the only Late Show “highlight” for Anne Hathaway.

She revealed on the show that she had a wardrobe malfunction while getting out of the car when she arrived at the studio.

“So I have…so if you guys want to, Google the pictures of me outside of your studio and I’m wearing an outfit. Now, you might notice I’m standing like this,” she explains, crossing her legs.

“And the reason I’m standing like that is because I looked down in the car and my pants had split!”

However, she had a plan to avoid going on TV in a pair of split pants, immediately calling a family member and asking them to run her over a new outfit to wear on the show.

“So I had this in my closet and I called my sis and I’m like, ‘Can you get to the Stephen Colbert show in about 10 minutes with that suit?’ And she ran it down — I don’t live too far — and your amazing team steamed it.”