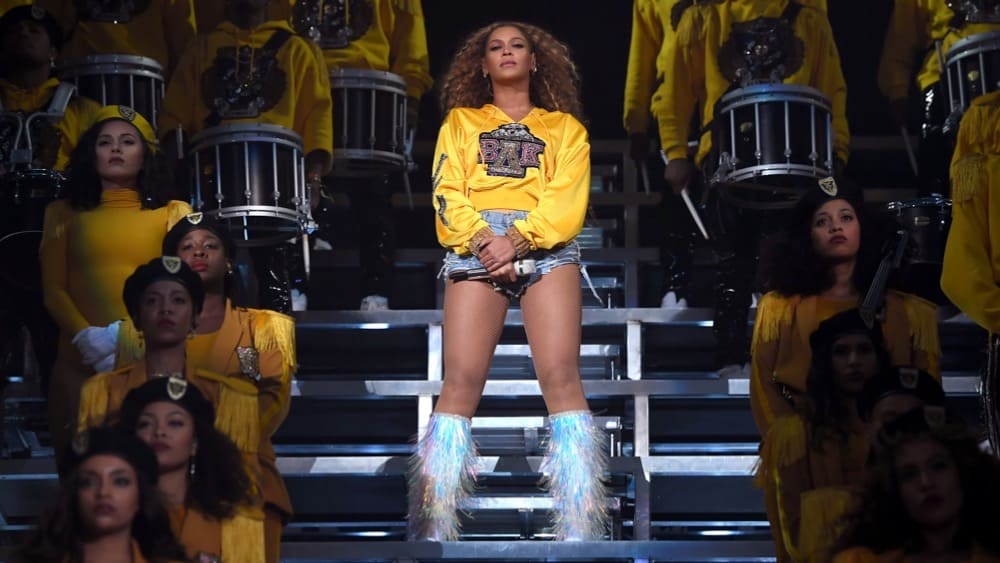 Felicity Huffman: ‘I Am Ashamed of the Pain I Have Caused’

Beyoncé is bringing her iconic Coachella performance to Netflix.

The singer has teamed with the streaming service for a new documentary, titled Homecoming, which gives an in-depth look at Beyoncé’s set at the 2018 Coachella Valley Music Arts Festival.

In the footage we see Beyoncé preparing for the performance with various teams of dancers and musicians as a Maya Angelou voice-over plays. “What I really want to do is be a representative of my race, of the human race,” Angelou says.

“I have a chance to show how kind we can be, how intelligent and generous we can be. I have a chance to teach and to love and to laugh, and I know that when I’m finished doing what I’m sent here to do, I will be called home. And I will go home without any fear or trepidation or wonder what happened.”

“Tell the truth. To yourself first, and to the children.”

All the kids and Jay-Z make appearances as well.

Watch the trailer for Beyoncé’s Homecoming below.

Based on Savannah Knoop’s memoir Girl Boy Girl: How I Became JT Leroy, this captivating true story goes beyond the headlines to tell the story of the most compelling literary ‘hoax’ of recent times. Laura Albert (Laura Dern) writes as her “avatar,” a disenfranchised young queer man named JT LeRoy. When her debut novel becomes a best-seller and JT becomes the darling of the literary world, she comes up with a unique solution to preserve her anonymity but give life to her nom-de-plume.

Enter her boyfriend’s androgynous fun-loving sister Savannah Knoop (Kristen Stewart), who connects with Laura’s punk, feminist, outsider universe and agrees to be JT in the public eye. Together, they embark on a wild ride of double lives, infiltrating the Hollywood and literary elite, only to discover who they are while pretending to be someone else.

A chronicle of the crimes of Ted Bundy from the perspective of Liz, his longtime girlfriend, who refused to believe the truth about him for years.

Brooks Rattigan (Noah Centineo) has the academic chops to get into his dream Ivy League school, but what he’s missing is an outstanding extracurricular — and the money. When he seizes on an opportunity to make some extra cash by posing as the boyfriend of a self-assured, combat boot-loving girl named Celia Lieberman (Laura Marano), he finds he has a knack for being the perfect stand-in. Together with his programmer friend Murph (Odiseas Georgiadis), Brooks launches an app selling himself as a plus-one for all occasions. Along the way, he meets the girl of his dreams (Camila Mendes). But when business starts to boom, Brooks must reassess everything he was once sure of.

Adrift in space with no food or water, Tony Stark sends a message to Pepper Potts as his oxygen supply starts to dwindle. Meanwhile, the remaining Avengers — Thor, Black Widow, Captain America and Bruce Banner — must figure out a way to bring back their vanquished allies for an epic showdown with Thanos — the evil demigod who decimated the planet and the universe.

A thrilling and vibrant live-action adaptation of Disney’s animated classic, “Aladdin” is the exciting tale of the charming street rat Aladdin, the courageous and self-determined Princess Jasmine and the Genie who may be the key to their future.

The film, which chronicles Franklin’s 1972 performance at a church in South Central Los Angeles, has been buried for decades but was finally shown to audiences in late 2018.

Madonna and the Breakfast Club

A remake of the 1988 comedy, ‘Dirty Rotten Scoundrels’, in which two down-and-out con artists engage in a “loser leaves town” contest.

Felicity Huffman: ‘I Am Ashamed of the Pain I Have Caused’