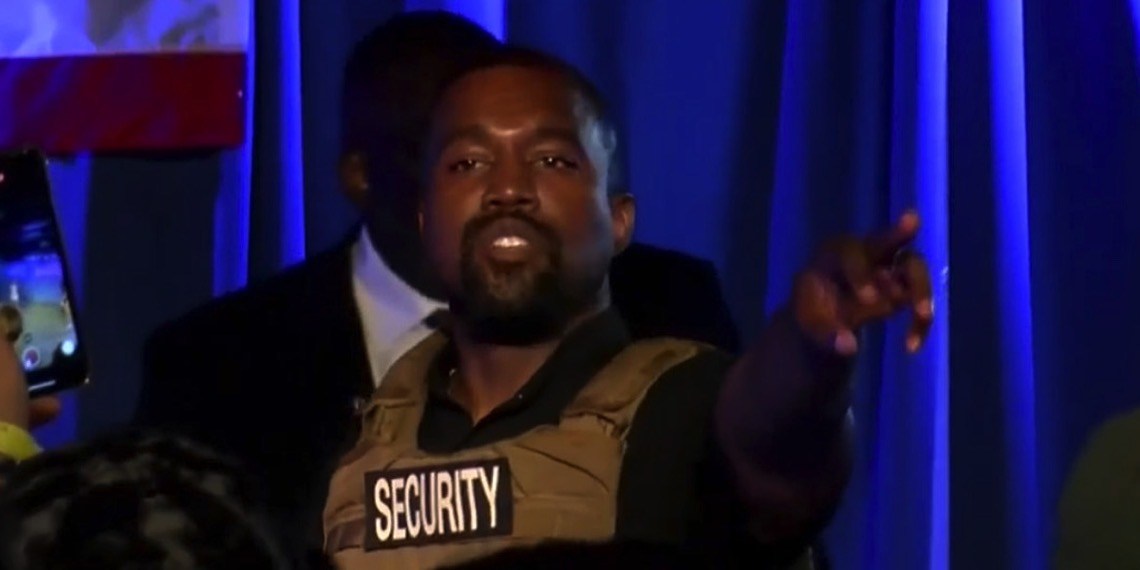 Kanye West is a couple of things — not well, not very intelligent and woefully unqualified to be running for president.

Tonight (July 19, 2020), during his first, and hopefully his last campaign rally, Kanye cried as he revealed he’d talked to then-girlfriend Kim about aborting their first child, North West, as he kicked off his presidential campaign in South Carolina.

Describing the moment Kim Kardashian West found out she was expecting their first child, West said, “In the Bible, it says, ‘Thou shall not kill.’ I remember that my girlfriend called me screaming and crying, and I was just thinking, because at that time I was a rapper I was out there, [had] different girlfriends and everything… and she said, ‘I’m pregnant.’ And I said, ‘Yes!’ And then I said, ‘Uh oh.’ “

“She was crying… and for one month and two months and three months, we talked about her not having this child. She had the pills in her hand,” West continued.

Then, West recalled sitting in a Paris apartment, where he said he had a revelation from God to keep the child.

“I’m in the apartment where my wife was actually robbed, and I have my laptop up and I have all of my creative ideas, I’ve got my shoes, I’ve got my next song cover… and the screen went black and white,” he recalled. “And God said, ‘If you fuck with my vision I’m gonna fuck with yours.’ And I called my wife and she said, ‘We’re gonna have this baby,’ and I said ‘We’re gonna have this child.’ “

“No more Plan B — Plan A,” he said, to a mixed response from the audience.

West clarified that he thinks abortion should be legal, but that there should be more support for those who need it.

“The maximum increase would be everybody that has a baby gets a million dollars or something in that range,” said West.

“Even if my wife wants to divorce me after this speech she brought North into the world even when I didn’t want to. She stood up and she protected that child. You know who else protected a child? 43 years ago, who do you think protected a child?” West said at the rally as he began to sob uncontrollably.

Yeah, Kim is going to be PISSED! Good luck with that.

And then, we have the Harriet Tubman portion of the rally.

Kanye said this: “Harriet Tubman.. never actually freed the slaves, she just had the slaves go work for other white people.”

At the point crowd went silent and you could hear a woman say, “Yo, we’re leaving right now.”

Oh, and here are his thoughts on gun violence:

He adds that if people stopped owning guns, other countries might invade and “you are going to be enslaved!”

It was probably a good thing West was wearing a bullet proof vest.