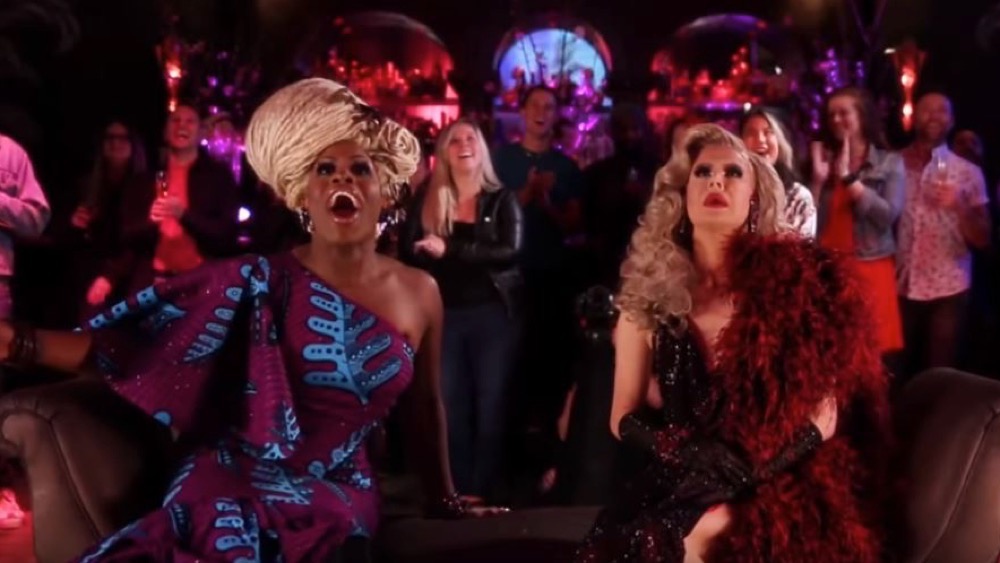 First of all, condragulations to our TWO newly-crowned All-Stars, Trinity the Tuck and Monét X Change! What did you think of the season finale tie? As I loved all of the queens, any of them taking the crown would have been great for me, but Trinity did win me over from the minute she walked into the workroom in that zip tie dress (and her finale lewk was the gag of the season) and Monét continued to show us why she was crowned Miss Congeniality last season. All in all, it was a good season, but I wouldn’t mind if we had a little break before AS5.

Nicole Byer and Joel Kim Booster and the gang at “What the Tuck?” had feelings about the finale and did not hold back in sharing them on their latest episode. All-Star 2 champion Alaska spilled some behind the scenes tea on “Race Chaser” with Willam and special guest Jinkx Monsoon (always a welcome voice, especially when sharing her spot-on impersonation of Lady Bunny.) Alaska also dishes about the finale with Manila Luzon on the latest episode of “The Pit Stop.”

Of course, Raja and Aquaria also have feelings about the queen’s runway and “Super Queen” looks on the season finale of “Fashion Photo Ruview.” Can I also say that Raja is just gorgeous? #Heathers4ever

Did you know that Monét has a podcast with season eight champion Bob the Drag Queen? It’s called “Sibling Rivalry” and it’s definitely worth a listen.

Trinity has a new video out for her song “I Call Shade”, packed with Drag Race alums including Yuhua Hamasaki, Blair St. Clair (I do declare), Thorgy Thor and Phi Phi O’Hara. Queentestant-turned Broadway sensation Peppermint also appears in the video, which is a high school revenge fantasy that tops Mean Girls and Heathers. The tune is on Trinity’s upcoming album, the appropriately titled Plastic.

Manila Luzon sent a belated Valentine to her Snatch Game inspiration, Barbra Streisand, with her latest video, “Barbra, Can You Hear Me?” The video pays tribute to some of La Streisand’s most famous roles, including Funny Girl, Yentl, and The Owl and the Pussycat. Eureka O’Hara and Thorgy Thor (again!) make appearances.

On a more serious note, Latrice Royale spoke with USA Today about regaining her right to vote in her home state of Florida. If you didn’t know, Latrice, a/k/a Timothy Wilcots, was released from prison in 2007 after being charged with possession of illegal substances and violating parole. She said, “I never saw myself as a politically involved person. I don’t like politics, personally. But with issues near and dear to my heart, I feel like I have to use my voice and speak about it.”

It’s only a week until the season premiere of RuPaul’s Drag Race season 11, and the excitement is in the air. VH1 has released a super trailer featuring the queens and a few of the amazing judges they’ve lined up for this season, including Wanda Sykes, Natasha Lyonne, Cheyenne Jackson, Tiffany “New York” Pollard, Troye Sivan, Lena Waithe, Joel McHale and the wonderful Elvira, making her second appearance on the judge’s panel (and I couldn’t be happier.)

If you are having drag withdrawals, fear not, as many of your favorites can be found on YouTube. Ginger Minj and Jiggly Caliente share their recipe for Shepard’s Pie in the latest episode of their web series, “Wigs in a Blanket.”  Trixie Mattel and Katya are also here for your entertainment in the latest episode of “UNHhhh.” I could watch these two read the phone book.

Until next week, everybody say “LOVE”!