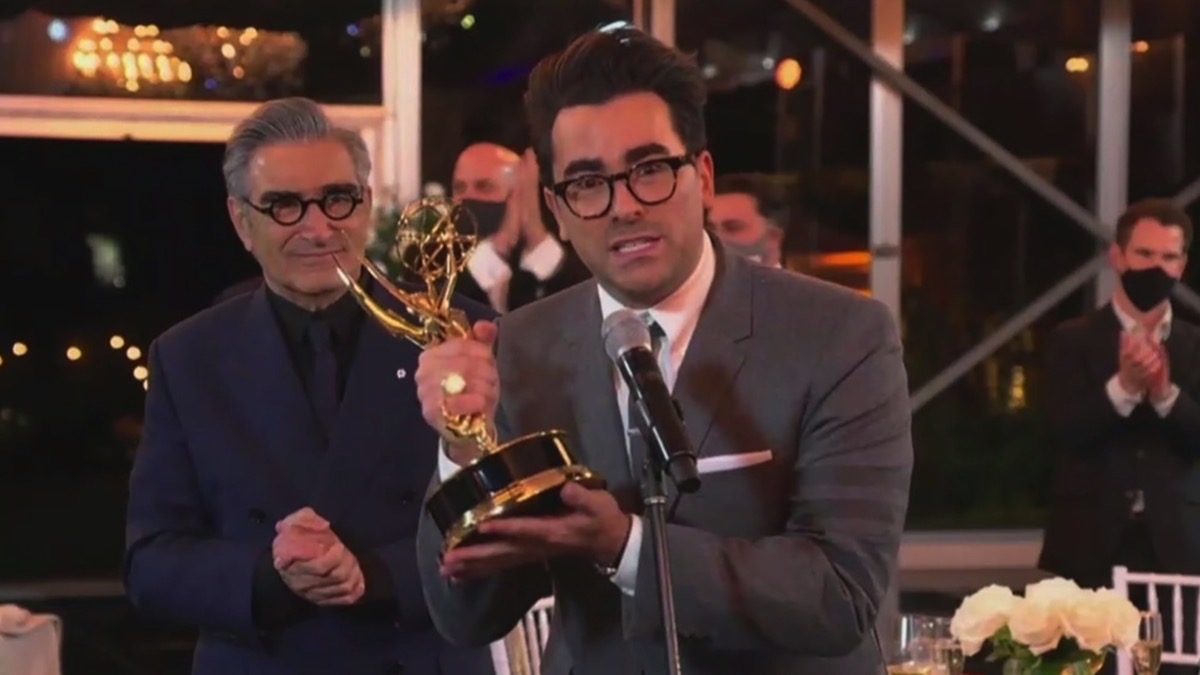 Needless to say, that has never been done before! Congrats to everyone for six seasons of giving us pure joy and heart.

Zendaya became the youngest lead-actress winner for a drama at the age of 24 for her work in Euphoria. She broke the record that 26-year-old Jodie Comer won last year for her Killing Eve win.

The show also won for Oustanding Writing for a Limited Series, Movie, or Dramatic Special and writer Cord Jefferson thanked his therapist while accepting his award.

“Thank you to my therapist Ian,” Jefferson said after winning. “I am a different man than I was two years ago,” he said, adding, “You have changed my life in many ways.”

“Therapy should be free in this country,” he said.

The hit HBO drama Succession was nominated for 18 awards at the 72nd annual award ceremony, with many of the stars pitted against each other. The family drama clinched the prestigious award for Outstanding Drama Series.

Oh, and this is what happens if you lose.

We also got half of our Friends reunion!

You couldn’t help but smile when Yahya Abdul-Mateen II won.

“Watchmen was a story about trauma. It was a story about the lasting scars of white domestic terrorism. It was a story about police corruption and brutality. But in the midst of all that, it was also a story about a guy who came down to earth to reciprocate to a Black woman all the love that she deserved. He offered her sacrifice and support. Passion. Protection. And he did all that in the body of a Black man. And I’m so proud that I was able to walk into those shoes.”

King thanked the Television Academy “for choosing me to represent the thespian community” and series creator Damon Lindelof. She finished her speech with a call to vote: “I would be remiss not to mention that, being a part of a show as prescient as Watchmen. Have a voting plan!” she urged, adding, “Rest in power, RBG.”

“I read a poem by Stephen Dunn that said, ‘All I ever wanted was a book so good I’ll be finishing it for the rest of my life,’” Jeremy said during his speech. “This job was that, for me. Jesse Armstrong, I owe this to you, Brian Cox, I share this with you. Thank you so much.”

“We have a big, important moment ahead of us,” the actor continued. “Are we going to be a country of division, hatred, and a country only for a certain kind of people? Or are we going to be one of love and strength and fighting for those, all of us, so all of us have the American dream?” he asked, before reminding viewers to vote: “Vote for love and compassion and kindness.”

“Wow OK. Mom I won! Thank you very, very much to the Academy. I want to say a huge thank you to the women I worked with on ‘Mrs. America across the board, and the women in this category – I love you ladies, you are all exceptional.”

It Was a Schitt’s Creek Sweep at 2020 Emmys, Plus Watchmen, Succession, and Zendaya Win