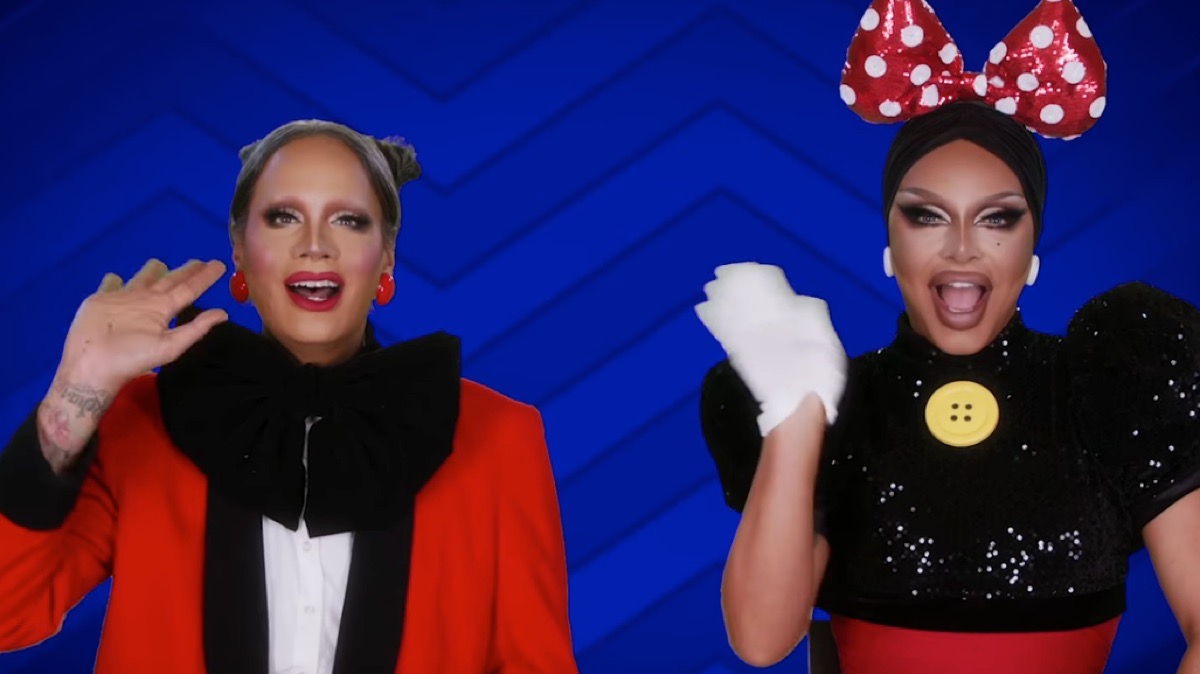 Hi, Drag Race fans! To say things have been a little crazy lately is quite an understatement. We’re all cooped up and looking for something to keep our minds at ease and, fortunately, the queens of RuPaul’s Drag Race are here to keep you company during the quarantine! These dolls have been keeping very busy, so we’ve got lots to share. Let’s bring it to the runway!

In what might be the last viewing party at Roscoe’s in Chicago, season 12’s Nicky Doll joins T Rex, Detox and Shea Couleé to talk about season 12 coronavirus and more. I don’t know about you, but I will miss these. It was also great to hear more about Nicky’s background, her experience on the show and having to deal with the language barrier.

Thorgy Thor joins Bob the Drag Queen for the latest episode of “The Pit Stop.” They discuss the drama of the third episode and the “World’s Worst” improv challenge and reveal their favorite act – and it might not be the one you think. They also discuss their most and least favorite fashions on the buttons and bows runway.

Raven (in an adorable Minne Mouse outfit) and Raja toot and boot the runway fashions from the buttons and bows challenge on the latest “Fashion Photo Ruview.”

Shuga Cain is back with another episode of “Shuga in the Raw”, reviewing the episode 2 entrance looks and tulle runway.

Miz Cracker reviews episode three and chats with Dahlia Sin on “Review with a Jew.”

Nina Bo’Nina Brown is back with another “Rawview”. What does our favorite outspoken queen have to say about episode 3? Check it out (and gag over her latest spooky look, which was inspired by fan art.)

In these difficult times, I am so thankful that our queens are still out there and keeping us entertained. Yuhua Hamasaki is back, riding solo, with more “Bootleg Opinions.” In addition to reviewing the fashions on the runway, she gives us a timely and handy tutorial on the right way to wash your hands.

Our favorite wig magician, Jaymes Mansfield has joined the ever-growing lists of DragRace alums weighing in on season 12, but in her own unique way. Check out “Not Another RuPaul’s Drag Race Recap.”

It’s a necessary part of RuPaul’s Drag Race…we’ve had to say goodbye to our first queen. Michelle Visage is back with her web series “Whatcha Packin’?” and talks to Dahlia Sin about her (brief) experience on the show. She also showed off some of the fashions she wasn’t able to wear on the runway and, judging by these looks, I can’t wait to see what the other queens are going to wear.

Dahlia may be gone, but she’s sure not to be forgotten – and she serves some fierce looks. Here, she shows how she created her makeup look for the buttons and bows runway. I love pinks and violets, so I think I am going to give this a try. God knows I’ve got the time…

Crystal Methyd is also here to take you behind the makeup mirror to show you how she created her red devil look from episode one.

Trixie Mattel gives “Kombucha Girl” and meme superstar Brittany Broski a Trixie drag transformation. They talk about bio queens, the perils of fame and which Pixar character would look excellent in drag – and they laugh – a LOT. It’s a fun makeover with a fierce result.

Trixie and Katya talk all thigs gay on the latest episode of “UNHhhh.”

Bob and Monét discuss coronavirus – in light of Monét’s recent trip to Asia – travel in Australia and lots more in the latest episode of “Sibling Rivalry.”

Bob again works some drag magic to help bond a pair of twin brothers on the latest “Drag My Dad.” Sherrod learns how to achieve the perfect tuck. I don’t possess the equipment, but the process sounds quite painful. I have gained a whole new level of respect for these queens. And

Alyssa Edwards is back with more of “Alyssa’s Secret”. This queen, who admits she’s got plenty of secrets still locked away in her vault, calls up her drag daughter Shangela to share a secret of her own.

Sasha Velour is the subject of a revealing interview in the UK’s Bricks magazine. She talks about putting together her Smoke and Mirrors show and her upcoming series Nightgowns for Quibi. When asked about balancing a career and her art, she said, “I feel sort of touch and go with my own success as an artist at all points. So I don’t feel confident giving anyone any advice on this matter. It can be very enjoyable to learn how to play the game and present your work in such a way that it does grab people’s attention and it does get shared, and you are able to continue to build a reputation and a name for yourself. Or maybe it’s a matter of just using every opportunity that you get and making the most of it.”

And we all can oop, as Jasmine Masters (who always has something to say) gets exposed. In this in-depth interview, she discusses her start in drag, where she was when she got the call to be on Drag Race, her experience on the show and on All-Stars, how she became a viral sensation and so much more. If you’ve been sleeping on this queen, check this out and discover how much fun she is.

Courtney Act discusses her 20-year career and talks about how she transforms from Shane to Courtney. This fantastic profile traces Courtney’s childhood, coming out and performing career, starting with a kiddie trio called Yabba Dabba Do. The piece also includes interviews with her (adorable) family (her father’s mustache is kind of epic) and her journey through reality TV, from Australian Idol to Dancing with the Stars.

Willam makes a spice rack that I covet (because it has the Spice Girls on it)and gives you more sexual innuendos than you ever thought anyone could cram into a three-minute crafting video  on “Crafternooning.”

If you need other ways to keep busy during your quarantine, why not get a little workout in? Nina Bo’Nina gets physical and takes us through an old school workout led by none other than Barbie.

Who wants to exercise when you can watch gorgeous guys break a sweat? Love Connie puts the boys of the Pit Crew through a lower body workout as they compete in a “clucking and trucking” challenge on “Oh Pit Crew.”

If you’d rather eat than workout (I sure would), a hunky personal trainer named Mario joins Silky Nutmeg Ganache on “Silky’s Snack Shack.” She makes a sweet cocktail featuring orange juice (to help you get your vitamin C) and make some tasty bruschetta.

Here’s something for our littlest drag fans, Nina West has a new project called “STORY TIME WITH NINA!” For the next 2 weeks Nina will do the show twice weekly on Saturdays and Wednesdays at 3pm EST/12pm PST. The next episode will be on Saturday March 21st and Nina will be reading Grace Byers’ book I Am Enough and will feature a crafting segment called “Together Time.” So, get out your imagination and crayons and spend some family time with Nina on Instagram Live.

Congratulations to season 5 alum Honey Mahogany, who last week was elected to the San Francisco County Central Committee, becoming the first black transgender woman to be elected to public office in her city and the state of California. As a reminder, don’t forget to get out there and vote, it’s more important now than ever.

Before we part for now, if you can, support the queens by buying their merch or getting a friend (or yourself) a personalized video on Cameo. Better yet, check out Digital Drag Fest! to see queens including Trinity, Nina West, Alaska and more. We will get through this, but if you can share the love, we encourage you to do so (especially if you saved up money for DragCon!)

Until next week, stay healthy, wash your hands and everybody say LOVE!