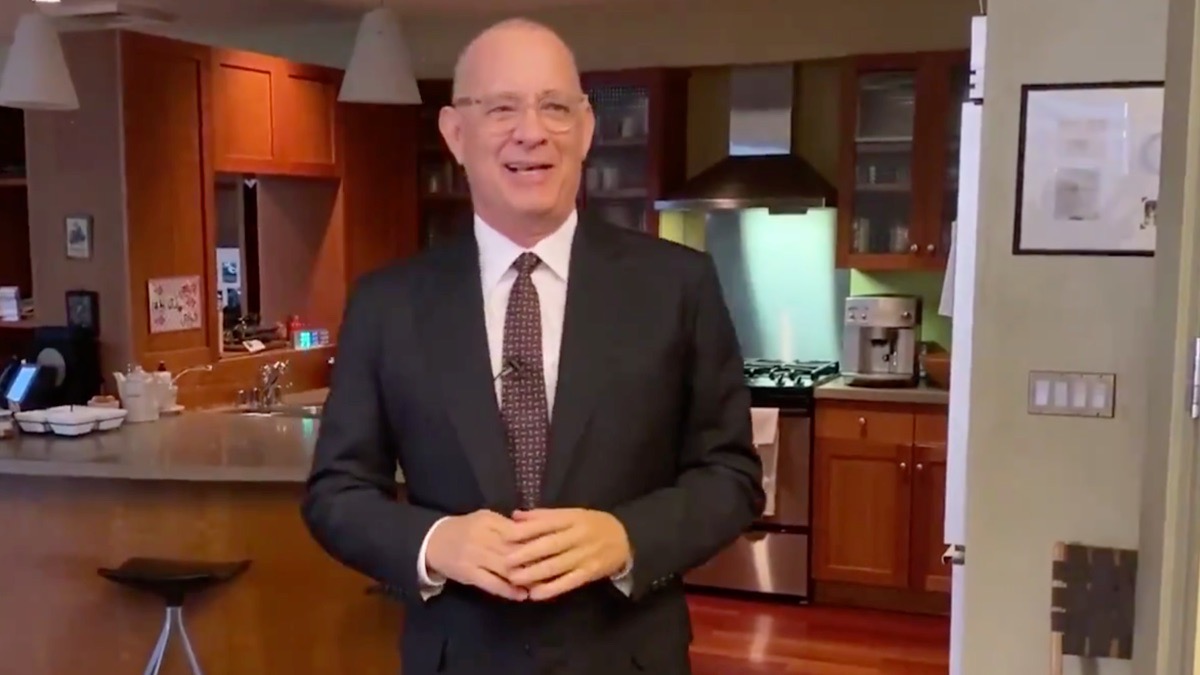 While Saturday Night Live was back last night (April 11, 2020), it was a VERY different episode than any we have seen before.

First of all, Tom Hanks was the surprise host for the first special remote episode, which saw the cast (and the band) appearing from their homes.

Last month, Hanks and his wife, Rita Wilson, were among the first celebrities to announce they had tested positive for the coronavirus. Hanks and Wilson quarantined in Australia, where he had been working on a film, then returned home to the United States.

Hanks appeared in his kitchen (or in front of a very convincing Zoom background) wearing a suit and sporting a shaved head, which he said was for the movie.

“Hey, it’s good to be here, though it is also very weird to be here hosting ‘Saturday night live’ from home,” Hanks said in his monologue. “It is a strange time to try to be funny, but trying to be funny is SNL’s whole thing, so we thought, what the heck, let’s give it a shot. But why me as host? Well, for one, I have been the celebrity canary in the coal mine for the coronavirus, and ever since being diagnosed I have been more like America’s dad than ever before since no one wants to be around me very long and I make people uncomfortable.”

The pre-taped show was an unorthodox approach to SNL, but as Hanks noted, “there’s no such thing as Saturdays anymore. It’s just, everyday is today.”

The world’s new way of keeping in contact — Zoom meetings — was ripe for satire. The show’s “cold open” showed all cast members arrayed in an onscreen gallery familiar to many working from home.

One skit featured a mock Zoom work meeting, where McKinnon and Aidy Bryant played a pair of inappropriate receptionists. Bryant was stopped just in time when she brought her laptop with her into the bathroom.

“I used my license as toilet paper and now I don’t know my own birthday,” Bryant said.

“Every day I eat half a chicken,” she said. “Sorry, chickpea.”

With Bernie Sanders dropping out of the Democratic primary race since the last time ‘SNL’ was on, Larry David appeared from his easy chair to once again impersonate the Vermont senator.

“Don’t worry about me,” he said. “It’s spring in Vermont, so soon it will be up to 40 degrees. And I finally have the time to relax and finish that heart attack from October.”

It was good to have the show back even if this is the new SNL normal.

The show closed with a moving tribute to musical supervisor Hal Willner, who died from complications of Covid-19 this week. He’s given emotional sendoffs from current and former cast members including Adam Sandler, Bill Hader, Tina Fey, Amy Poehler, John Mulaney and others. They reminisce about Willner’s encyclopedic knowledge of music, love of puppets and general kindness, and perform Lou Reed’s Perfect Day.