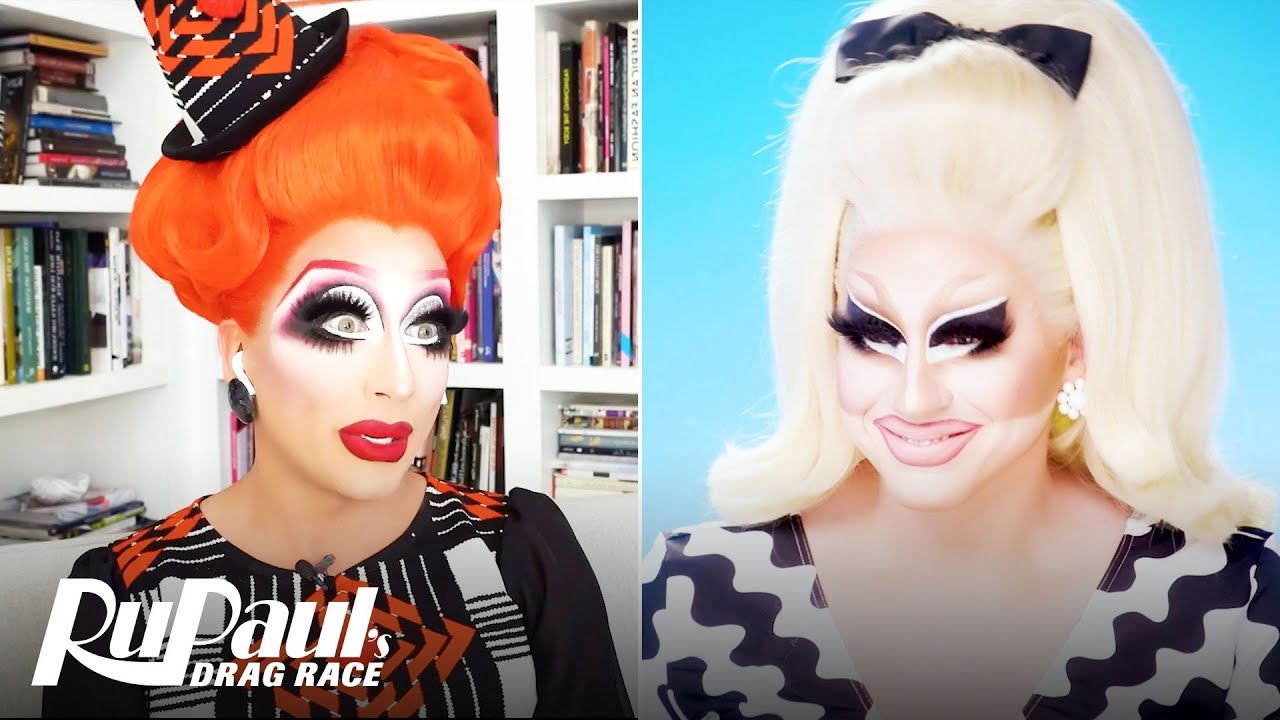 Hello, hello, hello and welcome to our weekly wrap-up of all things RuPaul’s Drag Race — The Week in Drag!

On Friday night at 8 pm ET, VH1 is airing a special detailing how season 13 was filmed during the coronavirus, titled RuPaul’s Drag Race: Corona Can’t Keep A Good Queen Down.

The special features interviews with the queens, behind-the-scenes footage, casting reels and candid photography from the set. In the trailer Tamisha Iman notes “I’ve survived corona, I’ve survived cancer… I’m not going to tell you what else I’ve survived, but just trust me I’ve survived some things.”

Ru said in a previous statement about this season, “Competing safely and fiercely, our 13 queens proved that it takes more than a global pandemic to keep a good queen down.” Judging from the masks, tests and social distancing seen in the trailer, it appears to be a very true statement.

Last week on RuPaul’s Drag Race, the queens opened the library for the reading challenge, tested their improv skills in “Bossy Rossy After Dark” and brought dazzling beaded fashions to the runway. Olivia Lux picked up her second win and Atlanta peach LaLa Ri had to sashay away. (Check out our recap.) As always, the Drag Race extended family had lots to say about the episode.

The hilariously unfiltered Bianca Del Rio gives Trixie Mattel her honest take on the improv challenge and runway fashions on “The Pit Stop.”

Nina West may not have excelled in the reading challenge (because she’s just too nice), but she’s recapping the show as only she can (fabulously) reviewing the top reads of episode 7 and more on “Extra Lap Recap.”

More honesty is in store when Bob the Drag Queen (looking gorge) and Monét X Change (in half-drag) talk episode 7 on “Sibling Watchery.”

She gets lovelier each time I see her – the stunning Shuga Cain gives us her take on the episode of “Shuga in the Raw.”

If you can’t get enough of these looks, you can hear more “Bootleg Opinions” courtesy of  Yuhua Hamasaki and Dusty Ray Bottoms.

I don’t know about you, but I already miss “The LaLa Ri Experience.” Our latest eliminated queen (and the pride of Atlanta) talks about her experience on the show with Michelle Visage on “Whatcha Packin’?”

While she may have had a few missteps on the runway (cough, bag ball, cough) LaLa was stunning in snakeskin in the train runway. Here, she shows you how she created the makeup for her dramatic look.

Aiden Zhane from season 12 (who, coincidentally, is also a Georgia queen) has some words of encouragement for LaLa on the latest “Losing is the New Winning.”

Gottmik is back with another makeup tutorial on how she used dramatic red hues to create an artistic face to go with her naughty bead look on the runway.

Across the pond, last week on Drag Race UK, the queens returned to the werk room after a seven-month break of filming due to the pandemic and RuPaul re-opened the competition with a shock announcement: Veronica Green would not be returning to the competition due to a positive COVID test, leaving one space open in the competition.

Disguised as the Brit Crew, previously eliminated queens Joe Black, Cherry Valentine, and Asttina Mandella returned to set and pitched their claim for why they deserved to take back their place in the race. After a vote, the majority of the seven remaining queens chose Joe Black to continue competing alongside them in the Olympics of Drag.

In the maxi challenge, this week brought the first-ever RuRuvision Song Contest had the Queens were asked to form two groups for a Europop battle. The United Kingdolls and Banana Drama performed their versions of the song you cannot get out of your head (I won’t even write the name of it here, just in case you have successfully managed to get it out of your head.)

After reviewing the performances and runway looks inspired by the theme “A Day at the Seaside,” the United Kingdolls were crowned the winners of the first-ever RuRuvision contest – earning the whole team a RuPeter badge. Joe was back in the bottom two again with Tia Kofi as they went head-to-head in the lip-sync battle to “Don’t Leave Me This Way” by The Communards. Ultimately, Joe sashayed away, again.

Bob and Thorgy Thor (who I wouldn’t mind if I saw lots more of) discuss the song contest and seaside fashions from last week’s episode of Drag Race UK on “Purse First Impressions.”

Raja and The Vivienne toot and boot the “day at the seaside” fashions and discuss the British seaside experience at places like Blackpool on “Fashion Photo Ruview.”

Twice-eliminated queen Joe Black and Veronica Green, who, sadly, had to leave the competition due to COVID, talk about their experiences and dole out superlatives to their fellow queens in the latest “RuPaul’s Drag Race Yearbook.”

Joe and Veronica were the guests on Divina DeCampo and Ricky Williams’ podcast “Fierce, Slay, Talk.” Veronica talks about testing positive for COVID and having to leave the show and Joe talks about the great H&M controversy.

Drag Race UK’s Tia Kofi has released her first single. Give the new tune, titled “Outside In”, a listen.

Monét takes us behind the scenes as she films a commercial for Truly Hard Seltzer.

If they ever do a drag remake of the new comedy Barb and Star Go to Vista Del Mar, you couldn’t cast anyone better to replace Kristen Wiig and Annie Mumolo than Jinkx Monsoon and BenDeLaCreme. Here they give you a review of the new movie that’s as refreshing as a poolside pina colada.

On last week’s episode of “Beatdown” Willam had Kylie Jenner in her sights, and this week she turns her attention to Kylie, as she shows us what’s in her bag. She also shares an energetic performance from Eureka O’Hara, a retro commercial for Bumpits (remember those?) and takes on a rapper with the best hype man since Flavor Flav.

Willam dips into the mailbag and, among her residual checks, she shows a haul that includes makeup, Latrice Royale’s sweet new snack (Ruby Royale) and some Christmas presents from the folks.

Need a new project to keep yourself busy during quarantine? Build an indoor swing! It’s easy, as Willam shows you in the latest “Crafternoonting.”

Bob and Peppermint get together for an in-depth discussion of trans bodies and visibility (including Gottmik’s top surgery and his merch that features his bare chest and surgery scars). With Transgender Day of Visibility arriving next month, this important video is a must-watch.

Monét and The Vivienne conduct a US vs UK face-off between two beloved sitcoms, Britain’s Absolutely Fabulous and the stateside Sister, Sister.

Jaymes Mansfield does a new makeup video and talks pop culture in this entertaining video.

Jonny McGovern and the late, great Lady Red Couture put to drag superfans in the hot seat in the latest episode of “Drag Fan.”

Coco Peru is back with another “Casa Coco” special with fun, music and stories. Her guests on her 9th special, which streams live on Feb 25 at 8pm EST (with a rerun at 10pm EST) are Pennsylvania representative Brian Sims and Peppermint. You can pay what you can and get tickets at casacoco.live.

Trixie Mattel and Brittany Broski team up again for another video. This time they get ready for a date “for no reason” and just generally cut up.

Over on Brittany’s channel, she does what she calls “horrible drag on world famous drag queens”, recreating Trixie’s iconic face while full of vodka It’s as funny as it sounds, trust me.

And that wraps up another glam-packed week in drag. As a late Valentine, enjoy Nina West performing Lorde’s “Supercut.” Until we meet again, stay safe, stay healthy, wear a mask and say LOVE!