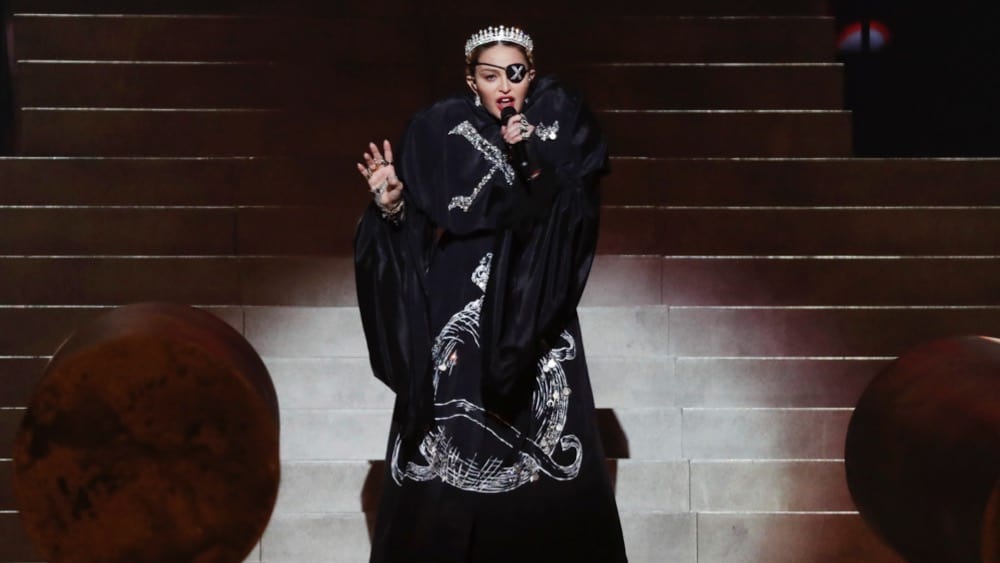 Madonna‘s performance in the Eurovision song contest Saturday night caused an unexpected stir, when two dancers, one wearing a shirt with an Israeli flag on its back and the other a Palestinian one, briefly went on stage during the show.

This year’s competition was more political than usual, held against the backdrop of a campaign by the Boycott, Divestment, Sanctions (BDS) movement that urged artists, fans and broadcasters to shun the event to protest against Israeli policies in the West Bank and Gaza.

But no singers or broadcasters pulled out, and only a small crowd of protesters turned up outside the venue.

Madonna performed at the Eurovision 2019 song contest, where she made a political statement about Israel and Palestine – something she didn’t have permission to do, organisers have said.

The legendary pop star had backing dancers wearing Israeli and Palestinian flags on their backs during her performance at the final in Tel Aviv last night.

The European Broadcasting Union (EBU), which organizes Eurovision, said it did not approve the act because the event is inherently “non-political.”

A spokesperson for the EBU told The Independent: “In the live broadcast of the Eurovision Song Contest grand final, two of Madonna’s dancers briefly displayed the Israeli and Palestinian flags on the back of their outfits.

“This element of the performance was not cleared with the EBU and the Host Broadcaster, KAN. The Eurovision Song Contest is a non-political event and Madonna had been made aware of this,” it said.

The 60-year-old singer, who is a follower of the mystical form of Judaism called Kabbalah, had faced criticism from pro-Palestinian activists for performing at the event.

Arnold Schwarzenegger Drop-Kicked in Back at South Africa Event