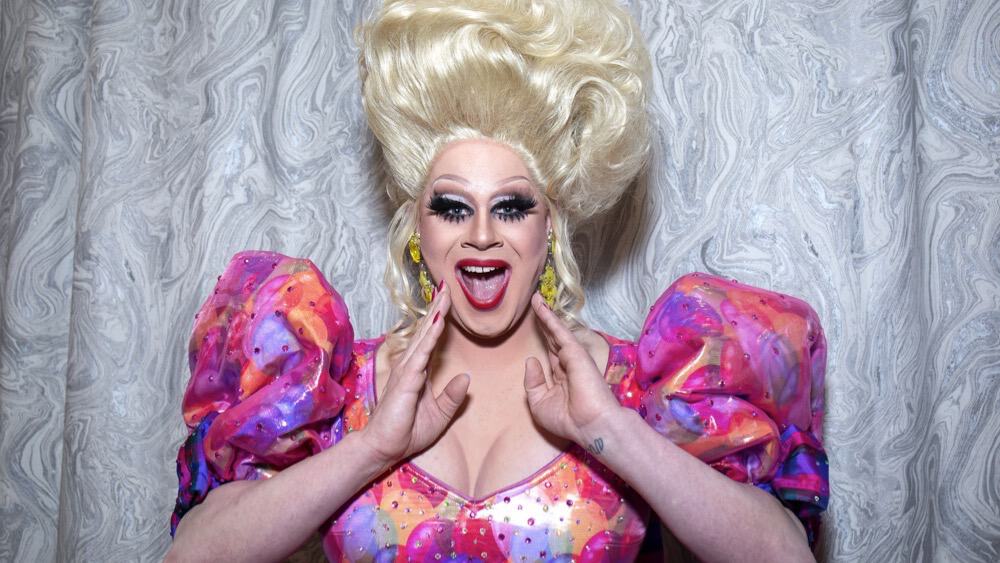 We have our top four! If you missed this week’s penultimate episode, check out our recap here.

Last week, the eliminated queens returned for a makeover challenge and we witnessed a lip sync that surprisingly didn’t result in a double sashay. Our favorite podcasters had feelings about what transpired. Hear what Willam and Alaska had to say on “Race Chaser” and listen to Mano and Matt spill the tea on “What the Tuck?”

Raja and Aquaria toot and boot the makeovers on the runway on “Fashion Photo Ruview” and Manila Luzon and Derrick Barry show off their family resemblance as they review last week’s makeovers on “The Pit Stop.”

The season 11 finale has already been filmed, and the queens BROUGHT IT on the red carpet. Check out these lewks!

As I miss Nina West already, the rest of this post is going to be a little “Nina-centric”, so if you’re not a fan, I apologize in advance (and what is wrong with you?)

The queen who had better win Miss Congeniality shows you how to recreate her Leigh Bowery-inspired polka dotted makeup for the “facekini” runway in this tutorial.

Nina talked to her friend, Michelle Visage, about her journey to Drag Race (which included submitting audition tapes a whopping nine times), what she learned during her time on the show and talks about her “Mrs. Roper realness” in the caftan runway (and more!) on the latest “Whatcha Packin’.”

Nina talked to MTV about the lip sync that sent her home. She said, “I know I’m a better performer than what we saw on TV last night, and I know that I got emotionally caught off-guard. I’d just won the last challenge and was like, what’s happening? The kids say shook. I was shook! And hearing Ru — the world’s biggest drag queen, the mother of all drag — say “meh”… It was a gut punch.”

If you loved Nina’s impersonation of Sarah Huckabee Sanders from “Trump the Rusical”, you’re in luck, as she reprises the role for a new video and song called “Hucks.” The video co-stars iconic drag performers Jackie Beat and Sherry Vine.

Also in Nina musical news, did you know she is releasing an album of children’s songs? Her upcoming EP includes a track called “Drag is Magic,” because it truly is.

Nina talked about the inspiration for the project in an interview with Entertainment Weekly, telling the magazine, “One of my dreams has been to engage a younger audience, queer parents, and parents of queer kids. There aren’t a lot of resources out there [for queer education], and I have a lot of gay friends who’ve adopted or straight friends who have children who are different in one way or another. It’s so up my alley, because I’m a Disney nerd, out the ass! I want to fill that gap and be the drag queen who’s like Barney or Mrs. Doubtfire, doing stuff that’s family friendly.”

In other, non-Nina news, when the stunning Mariah Balenciaga first walked into the workroom on Drag Race season 3, I thought for sure that she was going to take home the crown. After leaving Atlanta (boo!), she moved to Los Angeles, where she performs and has a podcast with Morgan McMichael and Ongina. Learn more about this queen in the latest in World of Wonder’s “FOLLOW ME” series.

The Queens of RuPaul’s Drag Race Season 12 Have Been…

Let’s talk about fears…and tattoos…with Monét X Change and Bob the Drag Queen on the latest episode of “Sibling Rivalry.”

If you ever wanted to know what life on the road is like for the Drag Race queens, a new series pulls back the curtain and gives you a backstage pass to all of the action. Werk the World, which debuts on WOW Present Plus on June 6, is serving up ten episodes, each one centered around a queen on the global Werk the World tour.  The show features some of your favorites – Alyssa Edwards, Shangela, Valentina, Latrice Royale, Sharon Needles, Kim Chi, Detox, Violet Chachki, Aquaria, and Kennedy Davenport.  After its June 6 debut, new episodes will premiere on WOW Presents Plus every Thursday.

Lastly, if you’ve always wanted to see a live show but the queens don’t come to your town, the Haters Roast is coming to you with a live stream, pay-per-view event. The show, which will be broadcast live from the Hulu Theater at Madison Square Garden in New York City on July 26 is hosted by Darienne Lake and stars Alaska, Jinkx Monsoon, Willam, BenDelaCreme, Latrice Royale, Thorgy Thor, Shea Coulee, Mimi Imfurst and the legendary Lady Bunny. The pay-per-view is $19.99 this weekend only and you can buy it here. If you’re in New York or are looking for an excuse for a road trip, you can also buy tickets for the live event here.