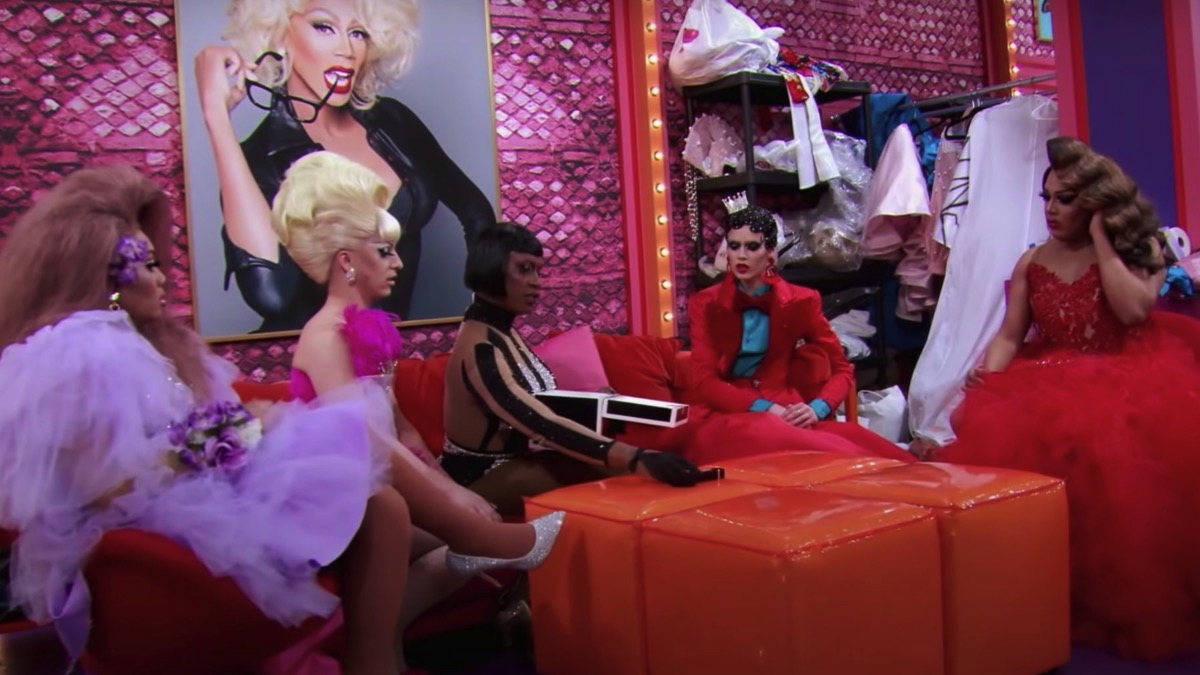 Hello, hello, hello and welcome to another week with our RuPaul’s Drag Race All Stars. We are down to the final five and the remaining queens are tasked this week with creating looks for the Charles family backyard barbecue.

After last week’s drama, Alexis is glad to still be there, but says that she feels like the kid who no one wants to play with. She recognizes that she needs to be “perfection” this week, or she’s sure to be the next one sent home.

Let’s fire up the virtual grill and take a look at the top moments from the episode.

In explaining this week’s challenge, Ru tells the queens that “Happiness is in your own back yard”. Announces that her sisters, Renae and Rozy (Ru’s other sister, Renetta, was a no-show, apparently) are throwing a Charles family backyard ball.

The queens have to put together two looks this week. The first is “Country Cousin realness” where they are to create their own “play cousin persona” and “crash” the party with their own comical backstory. Then, the look for the runway this week is “Backyard Eleganza”, where they have to create main stage outfits from scratch, but – of course – there’s a twist. They have to construct the outfits from stuff you’d find in your yard, like tablecloths lawn chairs hammocks and such.

Juju, who grabbed a bunch of garden hose, is lost on the concept of “Backyard Eleganza”, remaking that, “I don’t have a backyard, I live in Boston.” She asks about the other queens’ level of expertise with sewing. Shea, a theater costume design major in school, said she’s no stranger to a sewing machine. Cracker says she sews about half of her clothes, and Alexis says that while she sews a little she also relies on a glue gun.

When asked about her skill level, Juju admits, “I’m so-so with sewing.” Blair, who says she loves fashion, says she thinks this is her challenge. Kid Cracker made costumes from trash, so she thinks this challenge is also in her wheelhouse (I would have totally hung with li’l Cracker when I was a kid.)

Juju announces that she hates this challenge and is exhibiting some difficulty getting her look together. Shea helpfully comes to her table and helps her with her material. She admits that she is “not the kind of person who is like, ‘no bitch, this is a competition’” and said that of course, she’d help Juju.

Cracker is having problems with the sewing machine and Shea once again comes to the rescue. During the critiques later on in the episode, both Juju and Cracker tell Ru that Shea was gracious enough to help them, which I thought was so sweet.

After leaving a lengthy mirror message (which was jokingly referred to as something by “Dragtoyefsky”), last week’s eliminated queens left something else behind for the remaining queens. Blair announces that India left her a note and a gift, thanking her for being so sweet and showing her that “there are good people out there.”

Shea also got a letter from India, telling her how much of an honor it was to get to know her. Alexis also received one but didn’t want to read it. Juju, always the impish instigator (and slightly put off that she didn’t get one of her own), volunteered to read it for her and began, “Alexis, you are such a bitch. I can’t believe you are still in the competition. I can’t stand you. You are the potato salad with raisins that no one eats at the barbecue.” (Ew, is that really a thing?) Of course, she was kidding, it was just a sweet note of support, ending with “open your heart”.

It’s time for the Charles Family Barbecue and Ru sure didn’t dress for the occasion, but she looked fab in a yellow gown and a big, beautiful blond wig. Ru’s sisters, who received the makeover treatment as some of the first pupils on RuPaul’s Drag U (RIP) are here, along with miscellaneous “family” members to start the party.

Our first crasher is Miz Cracker, as RuPaul’s second cousin twice removed (by court order), Jocelyn Opal Rose, better known as “she’s got a lot of nerve showing her face here after all these years.” She brought her world-famous “things I found at the gas station” to the event. She looks like a white trash Stevie Nicks in a crimped blond wig and ill-fitting crocheted dress.

Juju is wearing Daisy Dukes, heels (that didn’t have the ankle strap fastened), and a huge-brimmed hat. She announced, “Sorry I’m late, I didn’t want to come” and is Ru’s Asian bestie, Ping. She brought the much-talked-about potato salad with raisins (and her secret ingredient, MSG.)

Blair is a white trash goddess in a mullet wig, rock ‘n’ roll t-shirt, bandana, denim mini and black vinyl thigh-high boots. She’s Ru’s first cousin, twice removed and then back again, Darlene, a/k/a “Stanky” because she’s gassy. She brings “Indiana surprise”, a mix of baby food and amoxicillin and reveals that Ru is the father of her son.

Shea is Ru’s “baby niece, Shaquita”, wearing a “one-of-a-kind” airbrushed shirt paying tribute to her late (I guess) character from the 90210 challenge, “Grandrea”. She was running late, so she just brought the chips from her car’s glove compartment.

Alexis, in a lime green dress and pink wig, is Ru’s ex-housekeeper, Carmencita. She removes her pink hair to reveal a red bob and says that on the weekends, she’s the queen of salsa. This challenge was fun, and now it’s time for “Backyard Eleganza.”

Fire up the fashions

Miz Cracker looks adorable in a red dress, with a checkered skirt. She’s got a fascinator made of a badminton racket and a whiffle ball, whiffle ball earrings and even has pieces of the shuttlecock around her neck and on her shoes.

Juju looks festive in a chartreuse tube dress and pink lemonade-hued wig. Her dress has cut-out watermelon decorations that complement her watermelon handbag. Blair is all flowy pastels, giving you “high fashion glamor” with a beautiful face and slicked-back hair.

Shea is a backyard bride, with a mosquito net veil, and gingham bodysuit and chaps. Alexis’ red mermaid gown has ruffles at the shoulders and side made from cut-up Solo cups and has a kiddie pool under her skirt. The judges weren’t crazy about it, but I thought it was really creative and fun.

Cracker is declared this week’s winner and she must face off with this week’s lip sync assassin, who is ru-vealed to be season 5/All-Stars 2’s Roxxxy Andrews, looking gorgeous in head-to-toe red feathers and a flowing white wig.

Cracker, by the way, looks cute in a light blue bodysuit with an exposed midriff and white thigh-high boots. When Ru asks if she has anything to say to her, Roxxy doesn’t disappoint. She says, “I’m Roxxxy Andrews and I’m here to make it clear/I know you love me baby, that’s why you brought me here.”

The lip sync song this week is “One Last Time” by Ariana Grande. The song starts slow, but the queens get into it. Roxxy removes her feathers to reveal a red bodysuit with a sheer overlay and sparkly red boots and then removes the sheer fabric to showcase her curves, accentuated by a belt that is emblazoned with “Thick and Juicy” across her backside.

I don’t know about you, but I couldn’t take my eyes off of Roxxy. She, in the words of guest judge Bebe Rexha (in head to toe Louis Vuitton) was “iconic.” Ru agreed and deemed her the winner. And, sadly, Roxxy revealed that Alexis’ name was on the lipstick and it was her time to sashay away.

We are now down to the final four – are you #TeamCrcker, #TeamShea, #TeamBlair or #TeamJujubee? I know who I want to win, and I can’t wait until the next All-Star is crowned. Until next week, just remember that if you can’t love yourself, how I the hell are you gonna love somebody else? Can I get an amen?