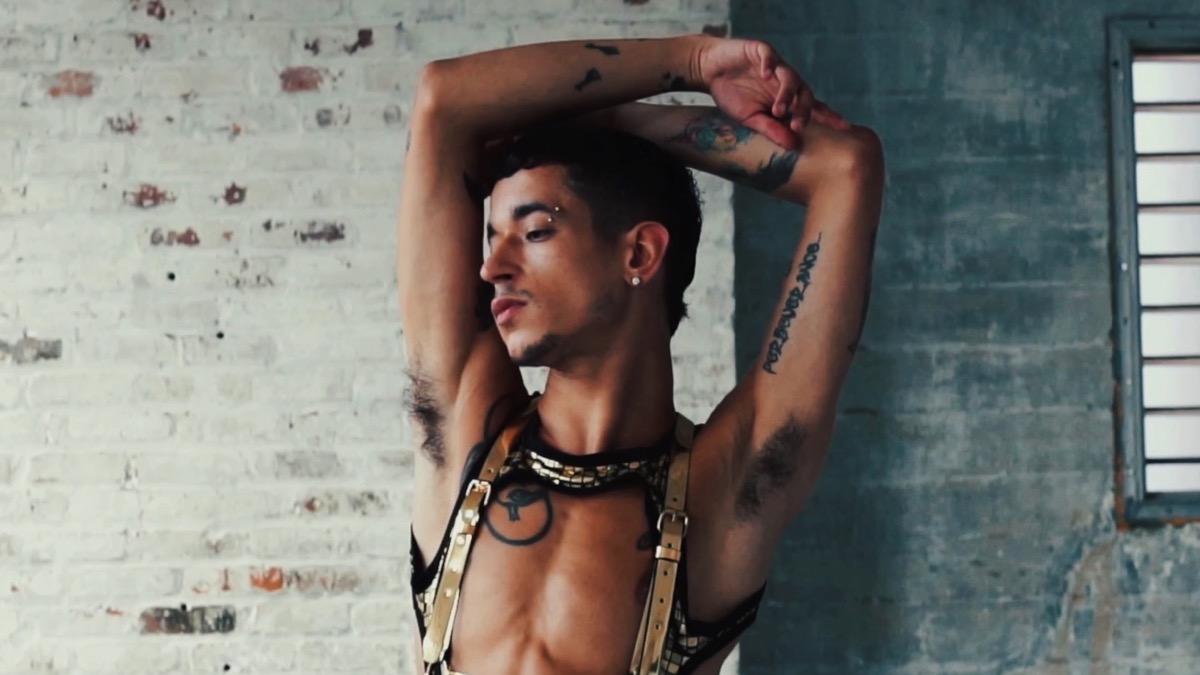 Up and coming indie queer-pop artist Jayse Vegas is definitely one to watch. The singer released the video for his new release “Born Again” on Friday.

The song is hypnotic and addictive and the video, directed by JXJFILMS features gorgeous images of the singer wearing pieces from the non-binary inclusive underwear brand BoiPKG and iconic gay underwear brand Andrew Christian.

All of Jayse’s music promotes acceptance and the message behind this new release is no different. According to the singer, ”I believe in order to become who we truly are we’ve got to experience a thousand deaths spiritually and emotionally. Every time we reach a higher level in life, we are not the person we were before. With every failure and success comes an opportunity to be ‘BORN AGAIN’ mentally.”

The singer, who has an upcoming project in the works with RuPaul’s Drag Race star Aja, spoke with us and answered the Socialite Seven. Get to know this exciting new, talented artist.

When did you know that you wanted to become a singer? Have there been any moments in which you regretted your decision (in the moment)?

From an early age, I knew I wanted to follow my passion for music. My mom says I’ve been singing my heart out since I was in the crib. I’ve always had a deep connection to music, and it’s always been my source of freedom.

I started singing around eight years old, in my elementary school chorus. That’s when I started to feel like I had an outlet to express myself the most. As I got older, I started writing music, and I started dancing around the age of 11. Music made me feel good, and through music I could make others feel good. Once I realized that, it’s been the only thing I’ve wanted and worked towards.

I don’t believe in regret. Everything happens for a reason, you know?

There have been times where I’ve cried and been a little lost in the world because of my decisions but everything I am now is because of where I’ve been. A few moments broke me into a million pieces, and although I wish I were stronger then, I’m better now. Greater, now.

There are two women in the industry who have had the most impact on my entire music  career. Madonna and Nicki Minaj.

I mean, DUH, right?! Have you seen manifestation the way they’ve presented it? They’re so inspiring.

The keywords are “I used to”, for me. Because that’s the proof that it’ll all pay off.

That’s not too obvious right now, is it?! Haha

All jokes aside, we could already connect those dots. It’d be a dream come true to work with one of my idols. I love collaborations! I’ve worked with so many different artists on various musical productions – singers, rappers, actors, dancers, drag queens. It’s a way to flex versatility and teach you new things.

There are a few other artists I’m hoping to work with in the near future. Bebe Rexha, Megan Thee Stallion, Dua Lipa, and Snow Tha Product. I’m a sucker for lyrics, and they NEVER fail to deliver. On top of that, their music can be found all over my most listened to playlists. Haha

I’m not sure if it’s a surprise, or just something not a lot of people know about, but there is one group that I listen to A LOT.

It’s a duo that goes by the name of, THE BLAZE. They make electronic dance music. They’re my go-to for whenever I want to listen to music. I love the vibes, and atmosphere their music creates. I’m also obsessed with LoFi music.

I’m hoping to achieve many things with my music. Music saved my life – It continues to do so every time I’m in despair.  I want to give that energy back throughout my music. If it’s one thing I wish to accomplish, it’s that I made a difference with what I put out.

I can live without a lot of things, so this one is tricky.

I absolutely couldn’t live without music. When people say they don’t listen to music often, or as much – I never understand. Sure, I like my moments of silence, but music gives you things you didn’t know you needed. Brings life into still moments.

I couldn’t live without singing or dancing either. I only say that, because I can’t see myself doing anything else. If there’s no pursuing music, then there’s no me.

I also can’t live without giraffes, but that’s something for another conversation!

I’ve been given a lot of advice, and sometimes it’s hard to take it from people who haven’t been to the places you’re looking to go.

However, one time I was having a discussion with Honey Davenport, and they said to me something along the lines of, “You can’t be mad at someone else for not doing what you’re supposed to be doing.”.

I was frustrated with the lack of representation in the mainstream media for people like me. I’m an openly gay, Latino man, who grew up in the projects. I’ve experienced more suffering than I’ve witnessed success for people like me.

I was frustrated with artists who were not pushing boundaries or being more vocal about the injustices in our community. But, when they said that to me – it all clicked.  I do what I do because I want to be the person I feel is missing in the world. If I want something to happen or something to change, it’s meant for me to do it, meant for me to be it.

Those words helped me completely detach from other people’s art and doings. I became more focused on my own work, and more in tune with my own intentions.