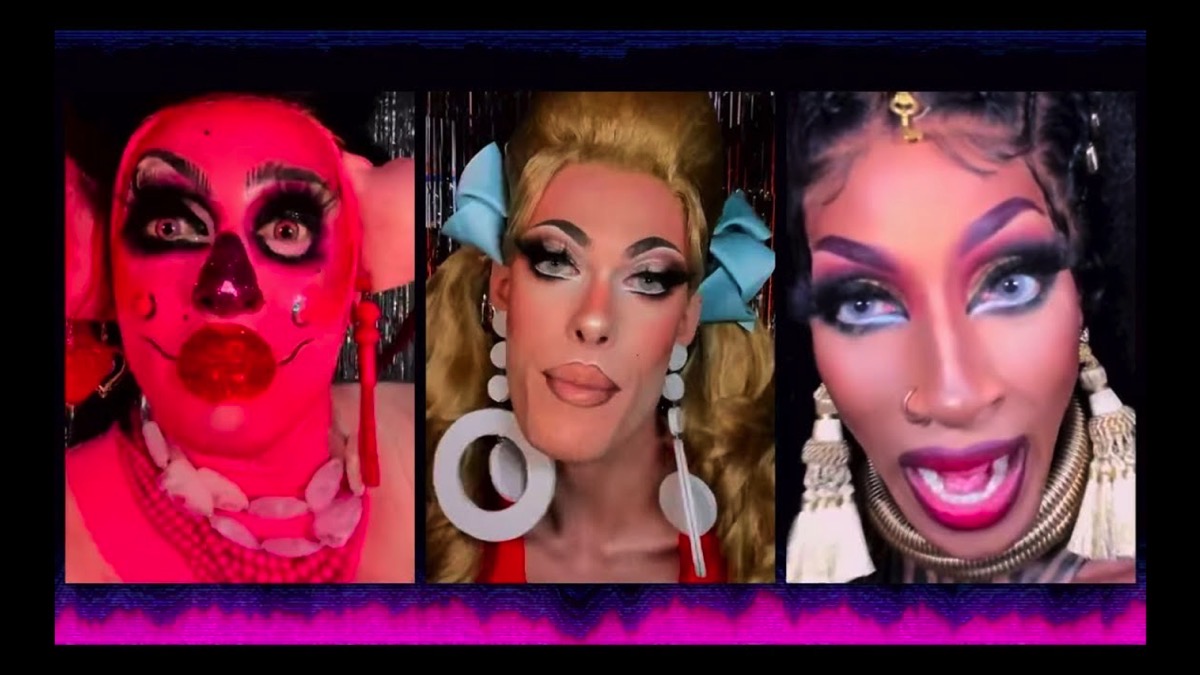 Wrapping up her stint as the host of “The Pit Stop”, Bob the Drag Queen and Bianca Del Rio – two champions in their own rights – take a look at the finale from the queens’ looks to the amazing lip syncs. I wonder who will take over for All-Stars? Could we get Pandora Boxx, perhaps?

Raja (in a feathered grey wig that I totally covet) and Raven (looking gorgeous, as always) toot and boot the queens’ finale looks on the last “Fashion Photo Ruview” of the season.

Miss Shuga goes solo to share her opinions on the finale on “Shuga in the Raw.”

Of course, no round-up of recaps of Drag Race would be complete without checking in with the amazing Nina Bo’Nina Brown. In her last “Rawview” of the season, she serves a Big Trouble in Little China-inspired look and discusses the finale as only she can – with lots of candid honesty.

While season 12 just ended, it’s time to crown a new All-Star. Entertainment Tonight spoke with the most recent additions to the Drag Race family and asked them about their picks for the victor of All-Stars 5. Just like what I’m seeing across social media, a lot of people are hoping to see Shea Couleé take the crown.

Entertainment Tonight talks to the newest batch of All-Stars and gets their reaction to the new format, where they face off against one of the show’s lip-sync assassins.

Our favorite Persian Princess, Jackie Cox, talks about her time on the show with Entertainment Tonight. She also shares her father’s complaints about the show, her mother’s reaction to her impersonation of her during her one-woman show, and how she was able to use Drag Race to bring awareness of the plight of the gay Muslim community. She also says she “didn’t anticipate” being the crush of the season. Adorable and intelligent, who wouldn’t have a crush?

Season 12 champion Jaida Essence Hall talks to Access Hollywood. She talks about becoming popular in the meme-o-sphere, talks about the inspiration for her finale look, and shares the look she’s proudest of (and it’s one of my favorites as well.) She also reveals the song she’d love to lip-sync to and talks about getting DM-ed by Ariana Grande. All hail the queen.

Gigi Goode gives famed makeup artist Jeffree Star a makeover, turning him into “Jeffree Goode” using his new Creamated palette. Along the way, lots of tea is spilled and by the end, if you didn’t love Ms. Goode before, you sure will now.

Trixie Mattel played her entire album, Barbara, live on YouTube. She discusses the current turmoil we are involved in and says she hopes that her performance “gives you just a little bit of a breath today.” The show is really a breath of fresh air we all need in our lives.

Drag royalty Lady Bunny is the latest queen to sit with Joseph Shepherd for his ‘Exposed” series. She discusses the heyday of the New York club scene in the 1980s, the creation, and evolution of Wigstock, living through the early days of the AIDS crisis and so much more. If you need a her-story lesson about life before Drag Race, this is a good place to start.

Another iconic queen, Coco Peru, is launching a live show this Wednesday. The show, Casa Coco, will stream every week at 9 pm. Coco promises, “I will chat live with you, have some special surprises, answer your burning questions, and perhaps even sing a song from time to time! I do what I can do.” Get your tickets at casacoco.live.

Willam takes us behind-the-scenes as she traveled the world on tour (pre-COVID, of course.) Along the way, we are treated to the filthiest dressing room, the most organized queen’s drag room, a cameo (literally) from Courtney Act, and lots of hotel rooms – served up with Willam’s unique sense of humor.

Jaymes Mansfield is back with another wig transformation. This time she turns a user-submitted witchy wig she describes as, “Cruella DeVil if she were played by Kim Kardashian” into a bouffant fantasy that would be right at home in a John Waters movie.

Bob and Peppermint discussed the issue of racism in the Drag Race fandom a few weeks ago and this week, they discuss the Black Lives Matter movement. Both of these conversations are so important, and I am so glad that Bob and Peppermint are getting these important ideas out there. I encourage everyone to listen to both of them.

Also this week, Bob and Monét X Change talk about the Black Lives Matter movement on  “Sibling Rivalry.” This is an incredibly moving episode of their show, dealing with a topic we all need to take seriously and support. At the end of the episode, the pair read the names of those who have lost their lives as the result of police brutality and it’s absolutely heart wrenching to listen to, but you really should.

Well, that wraps up another week for our roundup of news from the Drag Race universe. Until we meet again, stay healthy, stay safe, and share love.