After Saturday Night Live posted a promo for this week’s show in which Ariana Grande‘s ex-fiancé Pete Davidson seemingly referenced their short-lived engagement, Grande tweeted: “for somebody who claims to hate relevancy u sure love clinging to it huh.”

The tweet has since been deleted by the singer but Twitter and her nearly 59 million fans took notice. The took screenshots of her response and the subsequent tweet where she wrote, “thank u, next,” which, as it turns out, is the title of her new single and the name of her new album. 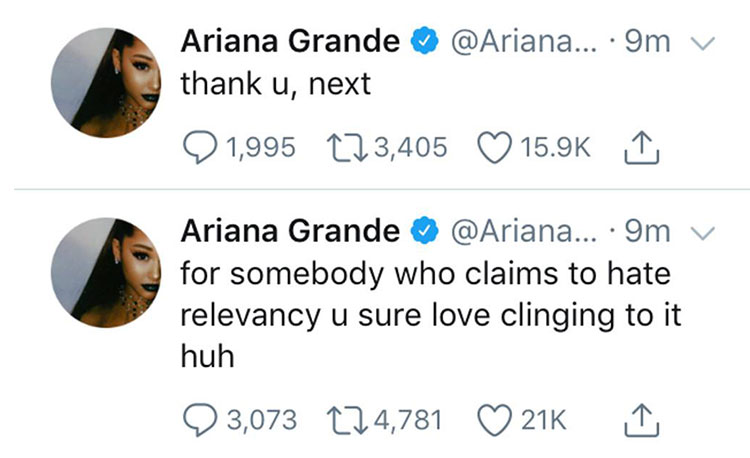 First, the singer dropped a new single, “Thank U, Next,” mentioning her former fiancé in the line, “Even almost got married and for Pete, I’m so thankful.”

Then, the comic turned serious during Saturday Night Live’s “Weekend Update” segment, saying, “I genuinely wish her all the happiness in the world.” Aww.

Grande took to Twitter on Saturday to give some more details about the upcoming project and it looks like she’s taking the high road. This will not be a Taylor Swift-esque breakup album.

exactly …. a new chapter 🖤 gratitude, growth, embracing our path bumps n all …. thank u, next https://t.co/D4J0DzpnPJ

it’s funny because ty,n is kinda the exact opposite of knew better but ….. you’ll see https://t.co/h6NwfP8dkt

Listen to the song below:

The return of Lindsay Lohan

Zachary Quinto and Jacob Elordi starring in He Went That Way

‘Down to the Calvin Klein tighty whities’: Sex and the City’s John Corbett kept all of Aidan Shaw’s clothes