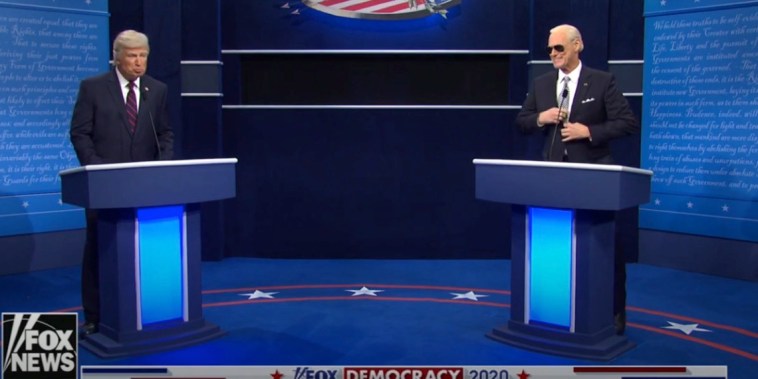 “The following is a re-broadcast of Tuesday’s presidential debate, even though Tuesday feels 100 days ago,” a voice said opening the show. “We thought it was important to see it again since it might be the only presidential debate. And it was pretty fun to watch, as long as you don’t live in America.”

At one moment during the sketch, Carrey’s Biden literally used a remote control to stop Trump mid-debate. “America look at me. Look directly into my eyeballs,” Carrey soft sang. “You can trust me because I believe in science and karma. Just imagine. Science and karma can team up to show how dangerous this virus can be. I am not saying I want it to happen. Just imagine.”

Of course, Maya Rudolph made an appearance as Kamala Harris who tried to bring calm to the debate with snacks.

The camera panned over to and zoomed in on McKinnon in her costume, sitting in the front row of the audience for Weekend Update. Surrounded by masked audience members, McKinnon put her right hand on her chest and bowed her head slightly. The show then dissolved to a “rest in power” graphic before the commercial break.

After Ginsburg passed away in September, McKinnon wrote a statement that said playing her was “a profound joy” and meeting her in real life was one of the biggest honors.