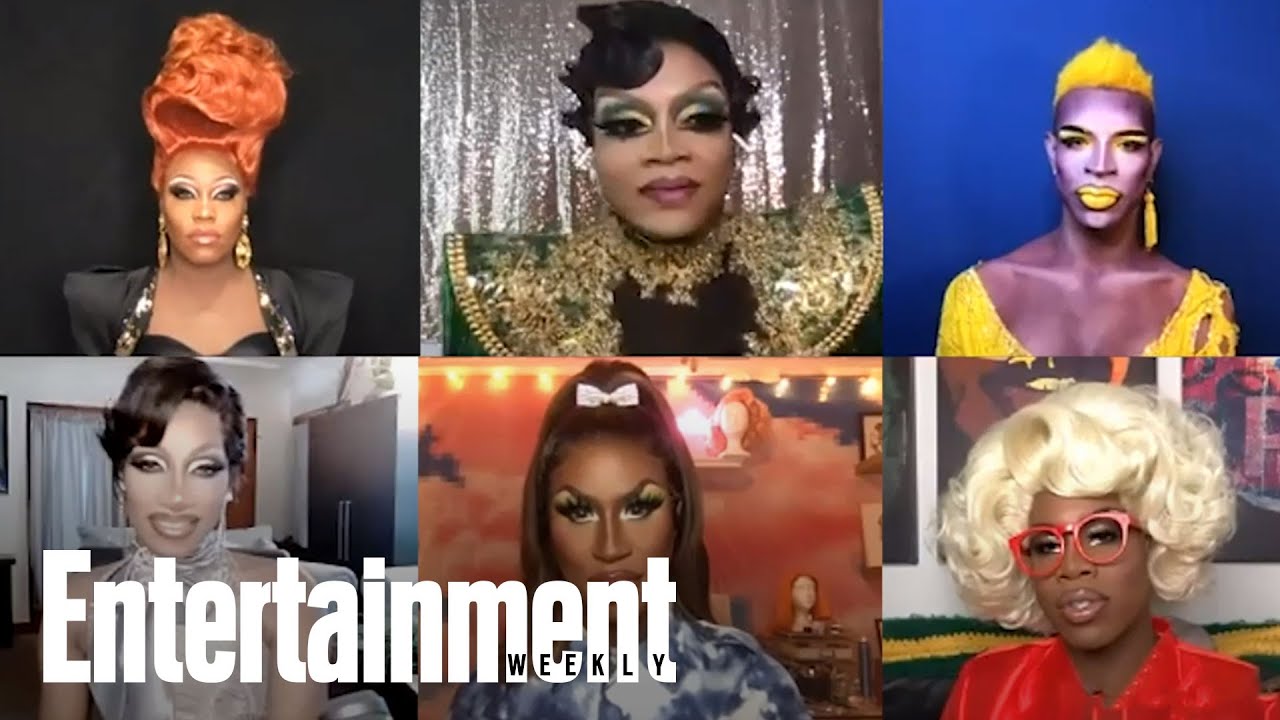 Hello, hello, hello! Welcome to The Week in Drag, our recap of all of the drag news that’s fit to print.

This week, the queens talk about an important subject in today’s turbulent world – race and representation and share their experiences in some insightful roundtable discussions.

We also go deep with beloved queen Latrice Royale, get some laughs with Trixie and Katya and treat our ears with some new music from Vegas Revue stars Yvie Oddly and Derrick Barry. We’ve got lots to cover, so let’s bring it to the runway!

The stars of Drag Race: Vegas Revue, including Yvie Oddly, Naomi Smalls and Asia O’Hara talk to Entertainment Tonight about racism in the show’s fanbase, addressing Katya’s joke at her expose in her new book and the differences between Werq the World and Vegas Revue. Yvie is a true queen and she deserves all of the respect in the world.

In another roundtable, this time for GLAAD, Michelle Visage, Ross Mathews, Jaida Essence Hall and Heidi N Closet talk about Drag Race‘s 13 Emmy nominations as well as how the show has taken on accelerating acceptance. They also share remembrances of the late, great Chi Chi DeVayne.

Winning season 8 of Drag Race, starring on an Emmy-nominated reality show (We’re Here) just wasn’t enough for Bob the Drag Queen. This enterprising queen is on a quest to become the next great YouTuber and get 500K subscribers in a year. He lays out his plans here, and I’m sure he’s going to make this mission a success.

In keeping with his quest, Bob posted a video of he and his adorable mother, Martha, as they react to Cardi B. and Megan Thee Stallion’s video for “WAP.” I love her reaction, especially when she says, “These women aren’t saving it for anybody.” More Bob and Mom videos, please!

Chunky yet funky, large and in charge, the inimitable Latrice Royale is the latest queen to get “Exposed” by Joseph Shepherd. Latrice talks about her childhood, growing up in a broken home, how imitating Wanda from In Living Color began her drag career and her experiences on Drag Race and All-Stars. I don’t know about you, but I could listen to her laugh all day long.

Peppermint is bringing us new music later this year with the release of her EP, “A Girl Like Me: Letters to My Lovers”. It’s the first of three, featuring five new tracks including the single “Best Sex.” Peppermint spoke about the project with Entertainment Tonight, saying, “It really does focus on my life — who I am as a trans woman — and everything that’s happening right now [with] Black Lives Matter, Black Trans Lives Matter and a lot of the issues that we are dealing with socially.”

She adds, “It’s my fantasy album of love songs sung by a trans woman in a way that speaks directly to trans women. It allows space for people to hear what it’s like to be a trans woman and what we go through and to see maybe we’re more alike than one may assume.”

Recent birthday girl Coco Peru (happy birthday, Coco!) talks about her obsession with the ultimate diva, Barbra Streisand and her iconic role in one of the most classic comedies of the 70s, What’s Up Doc? She also performs Babs’ song from the film, “You’re The Top.”

RuPaul’s longtime costume designer, Zaldy, spoke with Vogue about dressing the icon. Zaldy, who is nominated for an Outstanding Costumes For a Variety, Nonfiction or Reality Program Emmy this year, has been working with Ru since his “Supermodel of the World” days. Of working with Ru, he says, “Within 12 years, you can’t not grow. Within the world of drag, everything has been elevated to such a level that we’re always challenging ourselves within my studio to make something more and more amazing, and something that we may not have seen on Ru in the past. At the same time, [we’re] respecting the iconic image of RuPaul that we’ve created.”

If you miss the queens from the premiere season of Drag Race UK, you’re in luck, as they are back for a new series. On God Shave the Queens, Gothy Kendoll, Scaredy Kat, Vinegar Strokes, Crystal, Sum Ting Wong, Blu Hydrangea, Cheryl Hole, Baga Chipz, Divina De Campo, and The Vivienne are back. The 10-episode docu-series takes us behind the scenes as the queens embark on a UK tour that carried them across six cities, from Newcastle to London, Birmingham to Manchester. If that’s not enough, the queens are joined by the legendary Alyssa Edwards. Based on the hit series Werq the World, God Shave the Queens will bring viewers onstage, backstage and behind the scenes as cameras capture the good, the bad, the sickness and the madness. The series premieres September 10th and will stream on WOW Presents Plus. Additional episodes go live each Thursday.

Trixie usually teaches us some makeup tricks, but here she gets an education. Check out what she learned from watching a tutorial on “How to Wear Makeup in a God-Honoring Way.”

One of the most hilarious episodes of Trixie and Katya’s web series “I Like to Watch” was when they covered the first season on the British makeup competition show Glow Up (a/k/a the episode that launched a thousand memes like this one.) Well, the two are back to cover the second season of the reality show – and it’s equally as funny as the first one.

On the latest (YouTube) episode of “UNHhhh”, Trixie and Katya give us the skinny on weight, chatting about pounds gained and lost and answering a fan question about taking care of business in a public restroom.

Monét X Change and Bob the Drag Queen are back with a great new episode of their “Sibling Rivalry” podcast. This time around, the dynamic duo discuss the multi-functionality and appeal of IKEA bags in the drag world, YouTube drama and lots, lots more.

Honey Davenport is back with another episode of her celebration of all things random, “Da Fuq.” She and the fabulous Merrie Cherry discuss the appeal of Domino’s garlic bread and who makes the best pizza. They also discuss whether or not your iPhone can make you gay and share tales of coming out.

I think it’s all the best, but Willam is here with a “Best of” compilation from his “Beatdown” web series. In addition to a parade of some fierce looks (and, oh, those wigs!) Willam takes on “basic bitches”, the infamous “Prancercize” lady, a pomegranate hater, Angela Lansbury, speedo clad “musicians”, a rapping Barney, wannabe makeup artists and singers and adult toy hoarders.

WIllam and Alaska recruited some of the funniest queens in the drag world to engage in a little friendly competition. Watch Team Willam – Bob the Drag Queen and Peppermint take on Team Alaska – Sherry Vine and Bianca Del Rio in “Race Chaser Name that Tune.” There are even special appearances by Crystal Methyd, Jaida Essence Hall and Latrice Royale. Check out some of the highlights below and head over to Vimeo to watch the whole thing.

Trinity the Tuck has a streaming digital drag competition on Twitch called Love for the Arts. On the show, which debuted earlier this month, nine contestants, including non-binary and trans performers compete for glory and a $5,000 prize. Discussing the diversity of the cast, Trinity told Pink NewsUK that, “Anyone can do drag, and to limit your contestants to only be one type of drag is going to do a disservice to your show, to the community, to your other competitors.”

If you’re itching to see the queens from UK, Canada and the US together on a future show (add Holland and Thailand and let’s make this happen, World of Wonder!) Jan, Cheryl Hole and Lemon’s recreate some iconic looks from the VMAs. Watch Jan transform into Ariana Grande, Cheryl channel Lady Gaga and Lemon serving up some legendary Madonna realness.

If you’re feeling crafty and are up for a challenge, use this tutorial from Jaymes Mansfield to create your own hardfront wig using a sewing machine and a weaving cap. It’s definitely much easier to just go to Party City, but I love watching Jaymes work her magic.

Also this week, we got a song from Vegas Revue’s Derrick Barry and (unofficial co-star) Nebraska. Check out the Vegas-themed banger, “Bitch Please” with Velo and cameos from Alexis Mateo, Coco Montrese…and Heather Chadwell from Rock of Love.

That’s all for this week. Until we meet again, stay safe, stay healthy and say LOVE!