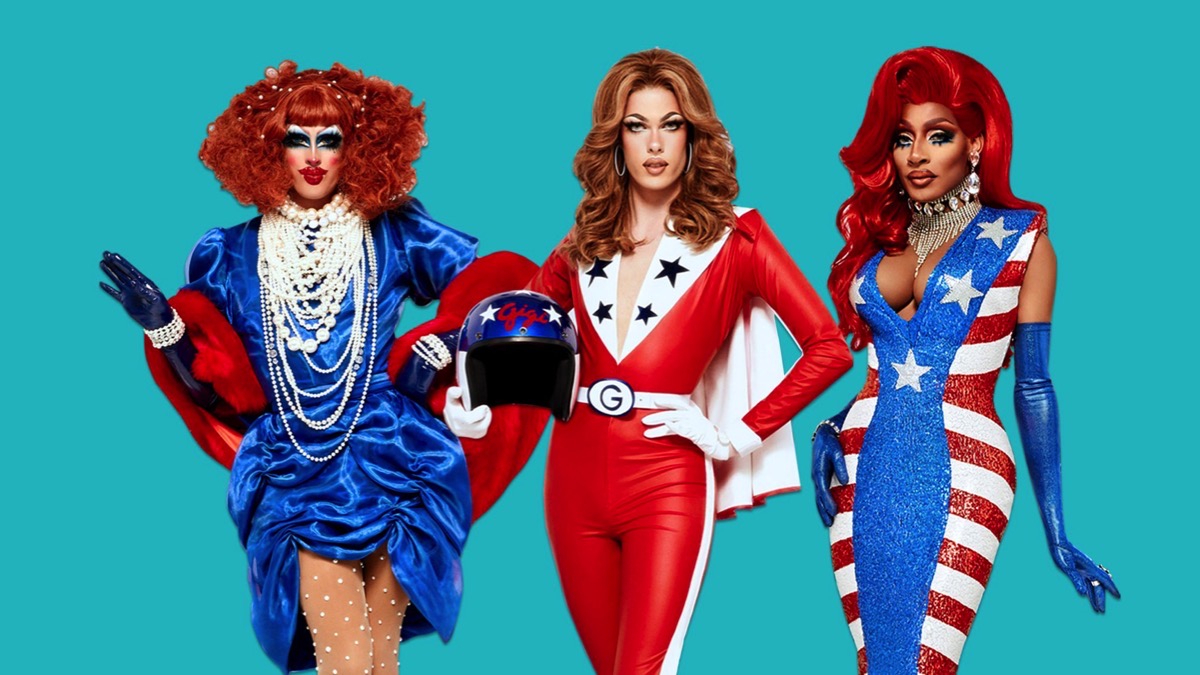 Hello, hello, hello, RuPaul’s Drag Race fans! Well, we have a new queen crowned “America’s Next Drag Superstar” and are ready to welcome a new batch of All-Stars into our homes.

It’s been a busy week in the Drag Race universe, with lots of chat and fabulosity from our top three and check-ins from some of our favorites. Beauty, recaps, fashion and beer…? We’ve got lots to cover, so let’s bring it to the runway!

Shuga Cain recreates Ru’s masked living room look (but make it glam) and shares her thoughts about the virtual reunion on “Shuga in the Raw.”

The top three all chatted with Michelle Visage for her series “Whatcha Packin’?” this week. Jaida Essence Hall gives some love to her hometown of Milwaukee, talks about loving to learn to love her nose, her flawless makeup journey to Drag Race (including revealing the first season she tried out for), her favorite challenge and more. She also shares some of her most fierce runway looks, including her sequined caped jumpsuit, her debate dress and her superhero-esque stars and stripes bodysuit, sharing how she put her pageant experience to work for her.

Gigi reveals her original career goals (and why she moved to LA), early makeup attempts, passion for makeup, fashion (including her Dior-inspired black wedding dress), her obsession with vintage clothing patterns and shares the tale of her button outfit that took 20K buttons and took over 30 hours to create.

Crystal admits she’s still growing into her look, talks about how she came up with the character for her one-woman show and talks about her “stuffed animal come to life” outfit for the color purple challenge (fun fact, Gigi isn’t the only queen who had wardrobe help from her mother) and her Freddy Kreuger fall fashion look.

The makeover tutorials from the top three were also released this week. Jaida recreates her bold and beautiful entrance look.

Gigi creates a Blue Satin fantasy garden party look and shares lots of helpful tips (like using blush as contour and cheek gloss for lips. I am living for the gorgeous ombre lip. Yes, this was not one of the looks from the season. In a tweet, she confessed that she misunderstood the assignment.

Crystal shows us how she created her dark, edgy and glamorous Fall Runway, Freddy Kreuger-inspired look. The way she created the bandage “wig” is genius.

Brita gives us a tour of her drag room in New York City (in case you didn’t know) and talks about some of her favorite fashions from the store, including her leopard print entrance look, her spring and fall runway gowns and her baseball-themed dress for the “Ball Ball” challenge in the latest edition of “Out of the Closet.” She also talks about how her look and aesthetic have changed since appearing on the show and shares the fashions she didn’t get to wear on the show, including her color purple dress, that’s so heavy it needs two hangers. I said this before, but Brita got the villain edit on the show, which was unfair, as she is really a grounded and sweet queen.

Widow Von’Du is back with a new song and video, featuring Monique Heart. She shows off her rap skills on “Keep That Same Energy.”

The All-Star season 5 queens answer some burning questions in “Who R U?” If you ever wanted to know which Golden Girl Jujubee would be, which Hogwart house Mayhem Miller belongs to and who they would be in the Pokémon and Sponge Bob universes, your dreams have come true.

Your new All-Stars also reveal their favorite fashions from season 12 and get us even more excited about the upcoming season in this video.

Raja and Raven toot and boot the entrance looks of the season 5 All-Stars in the latest “Fashion Photo Ruview.”

Willam gives the “Beatdown” to Joe Exotic from Tiger King, comments on the scariest bus u-turn ever and addresses the controversial Blue Cove Hideaway in her always funny video series.

Of course, Willam has lots of hilarious web content and she shared the second segment of the best moments from her series “Como Se Dice”, featuring Rhea Litre this past week. You can check out the first part here. This time around, we see Willam and Rhea with some great guest stars (including Jai Rodriguez), tackle technical difficulties and serve up tons of glamour.

If you’re looking for some summer libations to help celebrate Pride (virtually), Shea Couleé has got your back. The season 5 All-Star has teamed with DoStuff Media and Goose Island Beer Co. and has launched her own special brew as part of their Drag a Beer campaign. Shea Coul-Alé, a lemony wheat ale, will be available this summer and is refreshingly giving back to the community. A portion of all profits from the beer will go to an organization that supports individuals within the LGBTQ community. Profits from Shea Coul-Alé benefit TransTech, which is dedicated to equipping trans people with vocational training and practical career skills to kickstart their trajectory in the workforce.

Drag Race UK champ The Vivienne turns James St. James into the late, great Pete Burns and talks about her Worlds of Wonder series in this episode of “Transformations”.

The Vivienne also released her debut single and it’s really good. Check out the lyric video for “Tonight”.

Another musical queen from across the pond, Sum Ting Wong, released another of her “Just SUM Singing” videos. This time she covers Florence and the Machine’s “Howl”.

I tried to watch the Netflix dating/reality show Too Hot to Handle and couldn’t make it through the first ten minutes. Thankfully, Trixie Mattel and Katya watched it for us and deliver a savage (and hilarious) takedown of the show on the latest “I Like to Watch.”

Suffering through a terrible reality show and giving valuable advice Trixie and Katya prove that all heroes don’t wear capes. On “Trixie and Katya Save the World”, they discuss how they miss going to the movies and movie theater food and give sage advice on how to tell your parents you’re a drag queen, share meet and greet etiquette and reveal how to chat with straight people.

Trixie wigs out in a new video, showcasing her amazing assortment of wigs. She serves us 40 fierce wigs in two minutes to the tune of “We Got the Look” from her album Barbara.

Jaremi Carey, a/k/a Phi Phi O’Hara is entering a new chapter of his life, and he’s leaving his drag persona behind. In a series of social media posts, he explained that he’s been wanting to retire from performing at bars and drag shows, but plans to continue projects like his amazing Harry Potter transformations, telling fans, “My art will continue, my creations will continue, and my passion for entertaining will stay here and ALWAYS be fierce, but under my given name Jaremi is the artist, I’m here and not leaving, the Phi Phi name will be exiting shortly.”

Our favorite wig artist, Jaymes Mansfield, is back with another amazing transformation. In this video, she gives new life to a $500 Raquel Welch wig (a wig that drove me over to WigOutlet.com). She takes it to another bouffant style she describes as “Mae West channeling Brigitte Bardot in 1972.”

Kimora Blac gives us the tea on the much-talked-about Jeffree Star “Creamated” palette and creates a sickening smoky eye, which paired with the marble effect on her body, gives us statuesque beauty.

Season 7 champion Violet Chachki is not letting quarantine keep her from celebrating her birthday in style. On June 13, she is bringing her hour-long digital follies spectacular to your home. Get your glam on with this stunning queen and enjoy a full live stage show fantasy. Tickets are available at Voss Events.

Need more entertainment to fill your days in lockdown? The super sweet Honey Davenport is releasing the second part of the second season of her web series “Da Fuq” soon, featuring guests Miz Cracker, Silky Nutmeg Ganache and Vivacious (no word yet on whether or not Ornacia will also be appearing. Fingers crossed.) Check out the trailer.

That’s it for this week. Join us next week for lots of finale recaps as well as news and updates from the dazzling queens. Until then, stay safe, stay healthy and say LOVE!