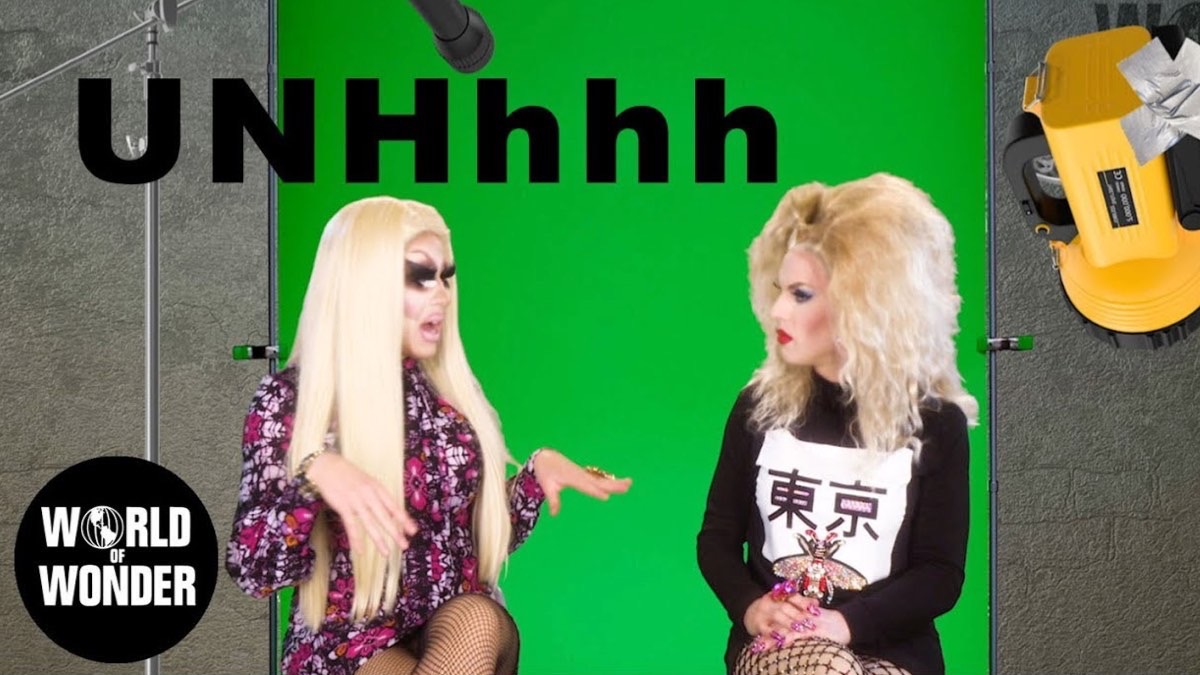 Hello, hello, hello! It’s another action-packed week in the world of drag, and I’m here to make sure that you don’t miss a thing from your favorite RuPaul’s Drag Race queens. From new music to makeup tutorials to help you achieve a fierce mug, we’ve got a lot to get into. Let’s not waste another moment!

Over in podcast land, Willam and Alaska talk about the recent Yvie Oddly Twitter incident, dive into the latest political news and more on “Hot Goss” and on the latest “Race Chaser” classique, the dolls take us back to season three’s cake-inspired dress challenge and bring me back to my youth by extensively quoting one of my early 90s guilty pleasures, Don’t Tell Mom the Babysitter’s Dead. Both shows are available on the Forever Dog network. Over at “Drag Her”, Mano and Nicole recap the second episode of All-Stars Untucked with your last dose of Tammie Brown wackiness for the season. By the way, our exclusive interview with Mano Agapion is coming this Monday, so make sure to check it out!

Raven and Mariah toot and boot the All-Stars season one entrance looks on the latest Fashion Photo Ruview. I’m hoping when this show reviews the entrance looks for All-Stars 5, they had better be tooting Mariah’s ensemble. #justsaying

Sasha Velour is coming to a screen near you. The season nine champion announced that her new, eight-part series, titled Nightgowns, which will debut on the new streaming service Quibi, set to launch in April of 2020. The series focuses on Sasha’s drag showcase of the same name, which has been running since 2015. According to Deadline, each episode focuses on one performer in the revue, following them in their day-to-day life, and ends with a “2-3 minute made-for-mobile visual expression of their live number.” The article goes on to say that, “The result will bring a new and fresh take on live drag, designed for the screen with eight shareable performances that redefine what drag can be.” In an announcement on Instagram, Sasha said, “I’m so excited for you to see the next stage of this very special drag show!”

She may be pretty, but Alyssa Edwards can also be petty. Our dancing queen shares advice on how to deal with awful gift-givers, stomping roomies, weird cats and more with her signature style and plenty of tongue pops.

On Friday, Shea Couleé released the video for her latest single, “Rewind”, on Friday. In an interview with Billboard, the top four season nine finalist she says that the video “has a very cinematic quality to match the cinematic quality of the song.” She goes on to say that “it’s kind of a glimpse into my life and my past,” noting that the song speaks to “the concept of rewinding as if our lives were films that we have the ability to go back and re-do.” The tune is now my new summer mellow-out jam and Shea looks stunning (and oh, so handsome out of drag.)

Another season nine alum, Jaymes Mansfield, shows off her impersonation skills taking on Trixie Mattel, Laganga Estranga, Gia Gunn, Bianca Del Rio, Adore Delano and more for “The Lost Snatch Game Audition Tapes”. I think we’re about due for an all former queens edition of “Snatch Game”, don’t you?

Willam is truly the gift that keeps on giving, and she’s working overtime to grow her media empire. On the latest episode of “Paint Me Bitch”, Willam gets made over by (and talks dirty in Spanish with) the very handsome celebrity makeup artist and hairstylist Lio Maldonado.

If that video isn’t enough Willam in your life, she delivers her own contribution to the “drag queens making ASMR videos” craze, kicked off by Derrick Barry and Nebraska. If you like the sound of whipsers, belches and the tapping of poorly applied nails on the mic, this is the video for you.

Monét X Change and Bob the Drag Queen talk each other into creating their makeup looks on each other in the “Trading Faces Challenge”. They do a great job. Bob looks adorable as Monét and I adore Monét -as-Bob’s “wild” eye makeup.

The latest episode of Trixie and Katya‘s web series, “UNHhhh” focuses on “secrets, shams, lies and fabrications.” The queens discuss everything from why we lie, Big Little Lies and why Trixie sometimes tells people that her career is in dry cleaning.

Derrick Barry joins Brad Goreski on the latest episode of “Iconic”. Derrick, the 100th queen to enter the work room, takes us on a trip down memory lane, featuring her detailed, elaborate recreations of some of Britney Spears’ most memorable looks through the years. I wish she wore the outfit she wore when the world was first introduced to her on America’s Got Talent – that’s the one I will never forget.

Jinkx Monsoon and her son talk about “shipping” on the latest episode of her web series, “Cool Mom”. The two discuss the pop culture characters they’d want to see together, including which Golden Girls would make the best couple (with Jinkx’s pretty spot-on Bea Arthur impersonation) and Jinkx says probably the best thing I’ve heard all week when she says that Catwoman isn’t a hero or a villain, but rather a “chaotic neutral”.

If you’ve ever wanted to look as sickening as Violet Chachki (guilty!), she shows you how she creates her “signature mug” while answering questions from fans. (She says her favorite challenges from her season were the Hello Kitty challenge – “which she won – and the ball challenge. She is serving “clean, simple, glam and sleek” for days and I covet that cat eye. I will now strive to achieve this.

Speaking of the magic of makeup, season nine’s gorgeous Kimora Blac creates a stunning rainbow look using eleven different eye shadow palettes. Just watching this makes me want to stage an Oceans 8-style heist at a Sephora. Who’s with me?  (I get to be Cate Blanchett.)

That’s a wrap for this week! Until then, everybody say LOVE!

Endnotes: This Is How Chace Crawford Feels About the Gossip Girl Reboot and More!