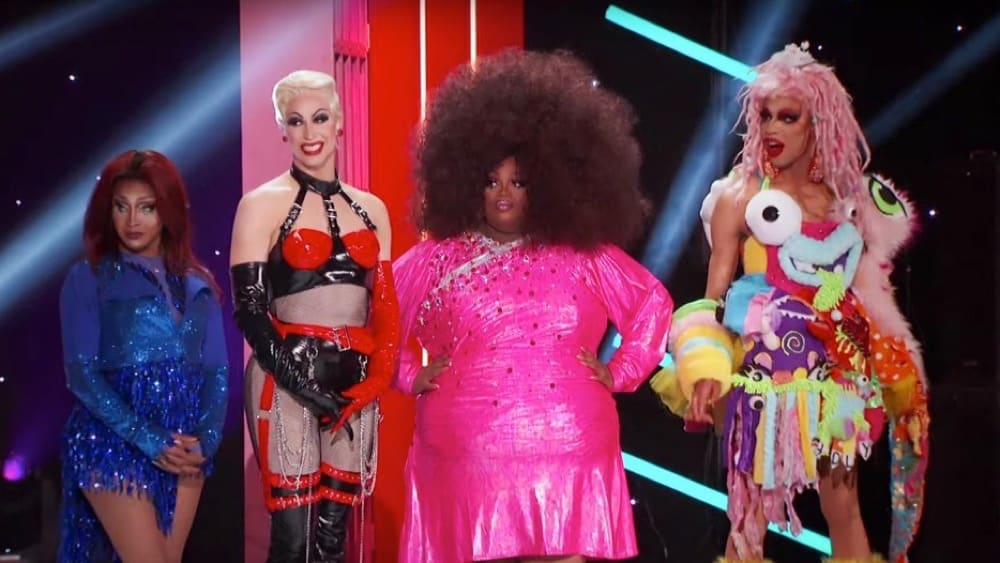 The Week in Drag – Your Season 11 Top Four, DragCon and More!

We have a new drag superstar! Before our new queen is crowned, there’s some laughs, some touching moments, music, lots of cameos from celebs and Ru girls and FASHION! Let’s get into it.

The show opens with the eliminated queens walking the runway. Scarlet Envy, Plastique Tiara, Nina West and Vanjie (obviously) seemed to be the audience favorites and Shuga Cain’s religious-themed reveal also delighted the crowd. They all looked incredible. As did Ru – which is not really a surprise – in a draped chartreuse gown and a gorgeous up-do (h/t Delta Work.)

In her opening remarks, Ru marveled that there are now 140 Ru girls showcasing their creativity, uniqueness, nerve and talent for all the world to see and was delighted that a show created by, starring and created for the queer community has won 9 Emmy Awards. That’s truly something to be proud of. Later in the show, Ru shares some important gay history for the children, detailing the emergence of the gay rights movement in the wake of the Stonewall riots. She also encourages everyone to vote because “LGBT rights are human rights.” Preach, Ru.

Before the top four queens – A’Keria C. Davenport, Brooke Lynn Hytes, Silky Nutmeg Ganache and Yvie Oddly (in case you forgot) begin the most “epic lip sync smackdown in her-story), we spend a little time with the queens, both with a video package that was reminiscent of the contestant profiles on America’s Got Talent, with bonus celebrity cameos – Fortune Feimster (reprising her L.A.D.P. role), Tiffany “New York” Pollard, TS Madison and my favorite person from this season, Love Connie.  Check out these queens packages (and get your minds out of the gutter) below:

We also meet the family members who are there to support the queens. A’Keria’s mom and grandma are adorable and hilarious (we also see where A’Keria got her sense of glamour and of, course, dat azz.) Brooke Lynn’s mom is equally sweet, saying that she raised a great kid, but also learned a lot from Brooke. I want to hang out with Silky’s brother, who jokes that their sibling relationship was great until 1989 (when Silky was born) and Yvie’s father is really handsome (the show reunited her parents, who apparently hadn’t seen each other in years.)

But hey, we have 90 minutes to fill, so Ru pays tribute to Michelle Visage (now removed) breast implants, with a cheeky “In Mammorium” clip package, ending with “Breast in Peace.” Michelle, who actually looks so much better without her overinflated cleavage, assured Ru that she will always be her “Breast Judy.” Aww.

Even though she didn’t make the cut, Ru adores Vanessa Vanjie Mateo and she was given her own “Man in the Street” segment, where she ran through the streets of Los Angeles asking to be put in the running for the crown. After the segment, Ru jokingly announced that Vanjie was America’s Next Drag Superstar, but I can’t help but think she wasn’t entirely joking, as Vanjie is the most talked-about, funny and beloved queen of the season. I am seeing her as the next breakout Ru girl, a la Shangela – prove me wrong.

I had never heard of Christine and the Queens before the finale, and am kind of bummed that the name is taken, but the singer covered Ru’s song “Sissy That Walk” while some of our favorite Drag Race alumni walked the runway. It would have been nice if the queens were identified by a chyron or something, as I couldn’t figure out who a few of them were, but I did see (my favorite queen of all time) Pandora Boxx, as well as (among others) Ongina, Raja (who looked amazing), Alexis Mateo, Nicole Paige Brooks, Jasmine Masters, Blair St. Clair and Coco Montrese.

Okay, let’s get down to the lip syncs. The eternally hunky Cheyenne Jackson, also reprising his “L.A.D.P.” role, laid out the rules and made out hearts flutter when he announced (and showed) that he wasn’t wearing any pants. Thank you, RuPaul. Ru spun the wheel and it landed on Silky, who chose Brooke Lynn as the queen she wanted to challenge. Brooke chose the song, which was the Destiny’s Child hit “Bootylicious.” Brooke Lynn had a subtle but effective reveal, removing the tops of her boots to reveal red pointe shoes. Silky went through multiple costume and wig changes. In the end, and kind of not surprisingly, Ru chose Brooke Lynn to move on.

Yvie and A’Keria lip-synced to Rihanna’s “S.O.S.” Yvie looked amazing in a pink wig and an outfit adorned with stuffed animals. A’Keria also looked amazing and, during the song, removed her wig to reveal a sequined headpiece (not a wrap, not a wig, just interesting.) You could tell A’Keria was struggling to keep up, and a few times was not on track with the words. Yvie killed it and was deemed the winner of the round, setting up a rematch between the season’s lip sync assassins.

Before the final showdown, Monét X. Change presented the golden Ru Tweeterhead to this season’s Miss Congeniality, who (of course) was Nina West. When Ru asked how she felt to receive this honor, Nina responded, “Meh.” I snort laughed at that. The perfect queen took this title.

So, it’s down to the last lip sync of the season. Brooke hit the stage in a long, blonde wig and a cape that had the word “reveal” printed all over it. Yvie looked like something out of The Fifth Element and I was so here for it. Their song was “Edge of Glory” by Lady Gaga. To be honest, both queens killed it, Brooke gave us a reveal (the back of her cape said ‘Here comes the reveal” – actually the cape was the best part of her outfit) but Yvie didn’t – and she didn’t need to. In the end, Aquaria, looking gorgeous in the most fabulous bird costume I’ve ever seen, handed the scepter to Yvie Oddly – America’s Next Drag Superstar. I loved Brooke Lynn and was #TeamYvie, so I am delighted with the results. Condragulations, Yvie! So now, we briefly bid adieu to Drag Race. All-Stars season five is coming soon, so I will be back to recap that for you. In the meantime, remember that if you can’t love yourself, how in the hell are you gonna love somebody else?

The Week in Drag – Your Season 11 Top Four, DragCon and More!