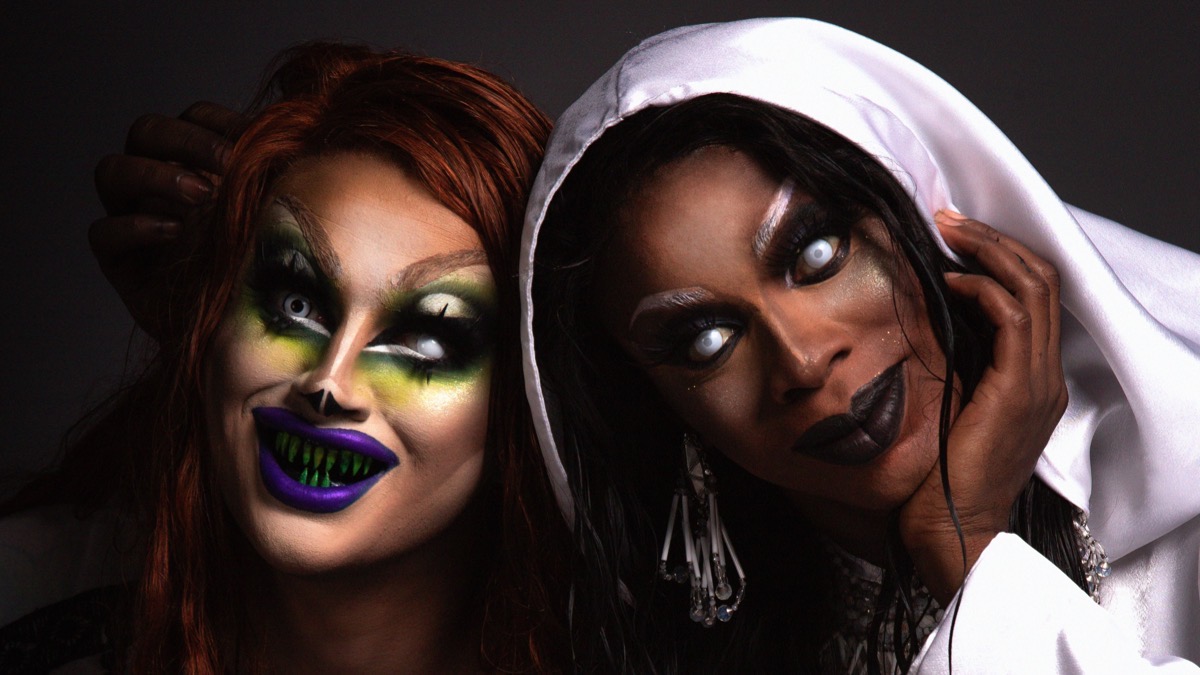 Halloween is upon us, and what better way to celebrate the spookiest of holidays than with a new song that delivers thrills, chills and an important message. Dragula’s Loris and Drag Race’s Honey Davenport have teamed up to release a new song and video, “Freaky Planet.” The video has all of the ingredients for the season, Ouija boards, candles, and fierce los that would make the Boulet Brothers proud.

Loris and Honey talked to us more about the song and what they’ve been up to lately as they answer the Socialite Seven!

When did you know that you wanted to be a drag performer? And have there been any moments in which you regret your decision (in the moment)?

I decided to be a drag performer when I was about 17 years old. It all started when I was playing with my stepmom’s makeup with my brother during a long, boring summer, and I have never looked back since! I feel like my drive to do drag and to create in general will never falter; it’s what gets me through my lowest moments.

Who has had the biggest influence on your career and why?

The biggest influence on my career has definitely been my family. My brother booked me for my first show and did drag with me the first time I dressed up! My Dad is and always has been so supportive of my drag, and my mother dressed me as a female witch at the young age of 4, so you could say she’s also my drag mom!

What was the inspiration for “Freaky Planet”?

“Freaky Planet” was a project Honey Davenport and I came up with together! We have always wanted to create music together, and in this social climate we wanted to make a song that really addresses some of the scary things happening on our planet right now, while still being a dancefloor bop!

How did you end up collaborating with Honey Davenport?

Honey and I met when I did her makeup for the live finale of RuPaul’s Drag Race Season 11! We instantly clicked and knew we wanted to work closely & creatively together in the future. When she finally moved to LA we were able to reconnect. This is just one of many projects we have cooked up over the past few months, all of which will be releasing soon!

What was it like to compete on the first season of Dragula?

The first season of Dragula was very much the “first of its kind”. Season 1 was kind of crazy, because at the time there was no guarantee that the show would be the worldwide success that it’s become today! Everyone worked so hard to make it special and epic, and it’s probably still my favorite season, for a lot of reasons.

How was it different filming Resurrection during the pandemic?

Filming during the pandemic was on a much smaller scale then i was used to. We filmed at separate locations, as opposed to the larger settings seen on previous seasons. While filming Resurrection, there was always only a small group of people involved, everyone was always wearing masks, and the whole room usually smelled awful because of the amount of hand sanitizer being shelled out to everyone! It was definitely a new and different experience!

I’m really excited for my “drag future”. I will be releasing more music in the next couple of months and will also be dropping a series of new YouTube original series on my channel. I’m starting with makeup tutorials inspired by iconic Dragula contestants from past seasons!

How did you end up collaborating with Loris?

Loris and I have actually known each other and been friends for awhile. She actually did my makeup for my iconic Bumble Bee finale look on RuPaul’s Drag Race Season 11. This past summer, we even dated for a little bit. All that being said, Loris is truly one of the most incredible talents I have ever met and had the opportunity to work with. When we decided on creating a song together, we enlisted the help of Loris’ brother Curtis Volkle to help produce the track, and the rest was herstory. We were both incredibly inspired and sat in the park one day writing about the scariest things we face in the world today….injustice.

Loris and I both feel that in times like the ones we face today, it is pivotal to use your voice and your platform to affect change. We were inspired by our desire to speak out about what’s most terrifying about the “freaky planet” we all inhabit today, injustice. The lyrics for “Freaky Planet” scream out and amplify the growing demand for social justice, all while making sure you don’t miss a beat to bop to this spooky season.

How was the experience of filming the “Freaky Planet” video?

This was my first music video I’ve filmed exclusively in LA since I moved out here last year. It was my first experience filming a video without my New York crew. The day of filming Loris and I had to wear so many hats, it truly made me miss my producing partner and manager Evan Zampella. Luckily, however, I was so thankful that my new good friend Julian Roca and his partner Rich Preffer were able to help direct and deliver visuals like I’ve never had before. I’m so proud of the visual experience we were all able to pull together.

You’re usually serving up glam fabulousness. How did you feel about showing the world a freaky version of yourself?

I don’t think the two are exclusive. I think there is something so glamorous and fabulous about “spooky” drag. I find beauty in horror, just like I find the beauty in portraying the rock star/supermodel that I am on a daily basis. My drag has truly never been binary; I have always been very versatile with my drag. In fact, the original aesthetic of my drag was more spooky and androgenous, before it evolved into the stunning Honey Davenport you see you today.

Could you see yourself competing on Dragula?

I have been taking notes from some of the “ooky spooky” queens in New York, Los Angeles, and all around the country. Competing on any drag reality show is so much fun, but I would definitely prefer to join the ranks of legendary superstars like Alaska who has shown up to judge Dragula. It would definitely be fun to wear the judge’s hat as opposed to being a contestant. I mean I am always down for whatever kind of feature and would love to make any kind of appearance on the show in the future, even if it’s just for an extermination. Haha!

If you could be any character for Halloween, what would you be?

I was really hoping to have had my Pickle Rick costume (from Rick and Morty) done in time for this spooky season, but unfortunately between the pandemic and juggling my many upcoming projects, it just wasn’t meant to be. My go-to creepy character however would probably be some kind of killer vampire/sorceress bumble bee, an amalgamation of them all.

Oh, there is a lot on the horizon for Honey Davenport. After releasing this track, I am jumping right into filming the new season of my original series “Da Fuq”. I’ll be launching a few other new original series as well, around the same time, so stay tuned to my YouTube for all the latest and greatest drag content. I’m also in the beginning stages of working on some new music, including a yule tide turn up with my “Drag Auntie” Manila Luzon!