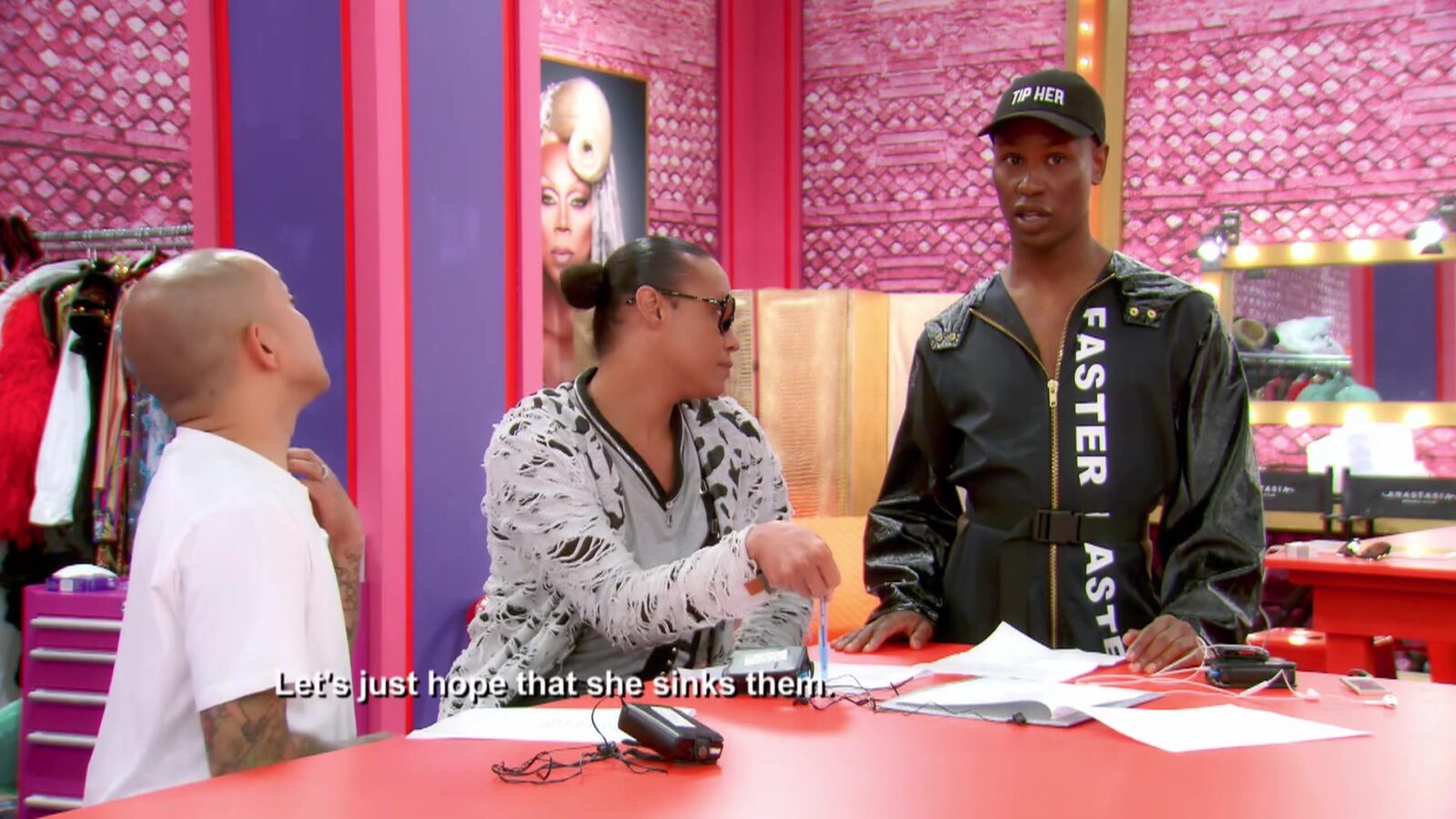 This week, our remaining nine All-Stars compete in a classic Drag Race challenge, where they team up to form girl groups to rival Destiny’s Child and Pussycat Dolls and work together to create a smash hit.

Considering Ongina was in the very first girl group challenge waaaay back in season one, we know she’s got this one…right?

Between the fun performance, guest judges Madison Beer and Tessa Thompson, a skin-tastic runway and the return of one of the show’s most lethal lip-sync assassins, there’s a lot to unpack.

SO, without further ado, let’s look back at the most memorable moments from the episode.

Note: like last week, the show didn’t share clips on social media, instead they promoted ways people can help the Black Lives Matter movement. They also posted a tribute to Breonna Taylor.

As part of this week’s challenge, the queens must all contribute a verse to their “new all-stars smash hit ‘I’m In Love’”. This sickening verse has to pay tribute to the celebrity man-crush of their choice. Ru, always one to get the ball rolling, shared that if he had to write an ode to a male superstar, his choice would be Ed O’Neill (who you young’uns know as the patriarch of the Pritchett clan on Modern Family) back when he played a sad sack shoe salesman married to Katey Sagal’s Peg Bundy on Married with Children. Ru missed the mark, as Ed O’Neill in The Adventures of Ford Fairlane was way sexier. “Booty Time”, indeed.

Getting the Band Together

Since India won last week’s talent show challenge, she was asked to choose the two queens she felt were her biggest competition, and she picked Shea and Blair. She assumed that Ru would team them up but, in typical Ru fashion, he flipped the script and made them all the team captains. India picks Jujubee and Alexis, Blair picks Cracker and Mayhem and Shea gets Mariah and Ongina.

Since the Derrick vs. India beef was over before it really started, we have to come up with some new drama, and, this week, everybody ganged up on Miz Cracker. Mayhem revealed that while they were writing their lyrics, Cracker told her to rewrite her verse. Ongina was mad that Cracker had said earlier that she wished she had Wite-Out so she could have changed her lipstick and sent her home. Cracker said she didn’t like being labeled difficult and she thinks she’s “a loving person trapped in a cage and all anyone sees is the cage.” She admits she has very few friends and wants people to think she is nice, like Blair. Eventually, everybody kisses and makes up, and Cracker says she doesn’t want to cry because she didn’t want to mess up her makeup, which led Juju to quip, “you’d need feelings to cry.” The shade of it all.

It was cute. Alexis, India, and Juju (loved the red look on her) sang the praises of Daddy Yankee, Justin Timberlake, and John Stamos. Juju sang “fill my house” and I lived. Alexis made Daddy proud but India lacked energy, even after she was advised to be “super campy.” Cracker, Blair and Mayhem looked the most like a girl group, all wearing complementary looks. Cracker’s verse about Sylvester Stallone was cute, as was Blair’s ode to Hannibal Lecter, but Mayhem’s take on “famed sex icon” Mr. Rogers was my favorite. Ongina looked so damn cute singing about Henry Cavill, but you can tell she was struggling to keep up with Mariah (who, once she figured out Jason Momoa was Aquaman, not Superman, did just fine) and Shea, crushing on Chadwick Boseman. It was a really cute performance, and Ru seemed to enjoy it, so there’s that.

Love the Skin You’re In

In keeping with Ru’s entrance look, a gorgeous red sequined animal print sheath with neon fabric overlays, the theme of this week’s runway is skin, and the queens took that into some interesting directions. India calls her dress made up of multiple layers of brown hues “racial unity” that celebrates “all of the skin tones out there” joined by a red heart on her hip. Jujubee gives us “Asian Mae West” with a confection of an updo and a beautiful mermaid dress in a shade of dusty rose. Alexis dazzles in a self-made tan leather gown with huge ruffles on top. Blair dons a skin tight pink latex dress (and matching hat), pink makeup and a bright yellow wig.

Cracker is a vision in beige tulle, with ruffles coming out of her chest and flowing out behind her in a long train. Mayhem is dripping with beads in a cool, deep brown curve hugging gown. Shea definitely drew gasps from the judges’ panel (and myself) with her look, which she describes as  “Nubian goddess realness.” With her natural wig and gold choker and her crystal-covered bodysuit which gives “nude illusion” a whole new meaning, she definitely won the runway.

Ongina gives us her take on a traditional Filipino costume depicting a legendary mythical bird. There’s a lot of gown here, and our tiny queen seems to get a little lost in all of the fabric and feathers, but I still like it and thought the parasol was a lovely touch. Mariah is a stunning “butterscotch caramel with a kiss of brown sugar” in a gorgeous stoned bustier peeking out from a sparkly mermaid gown topped off with an elegant blond updo.

Ru’s Made Some Decisions

Alexis, Cracker and Mayhem are deemed safe and, to no one’s surprise, Shea wins this week, receiving a trip to Puerta Vallarta, Mexico. Blair is also safe, leaving Ongina, Mariah and India in the bottom. Shea has mixed feelings about all of this because 2/3 of her team is in the bottom three and she feels she didn’t do her job as team captain. As the bottom three plead their case for staying in the competition, Ongina seems to kind of bow out, which makes me fear that our OG queen is soon going to sashay away.

This week’s Lip Sync Assassin is none other than Alyssa Edwards. Shea’s a little shook, and rightly so, as Alyssa can tear up the stage. The two lip-sync to the Pointer Sisters’ hit “Neutron Dance.” Alyssa doesn’t bring as much energy as the song deserves, while Shea delivers a perfect performance, bopping, doing splits, and just bringing fire and enthusiasm to every note.  Ru declares that she is the winner, and Shea gets a $20,000 tip. She also has the sole decision as to who is going home. Sadly, it is not Ongina’s time and she is leaving the competition. I was so hoping she’d get to show us so much more, as she is an amazing queen (and sent me such a sweet Cameo for my birthday.) Of course, I have a feeling that we’ll be seeing much more from this OG queen.

And so, another chapter in the book of All-Stars closes. Until next week, remember that if you can’t love yourself, how in the hell can you love somebody else? Can I get an “amen”?