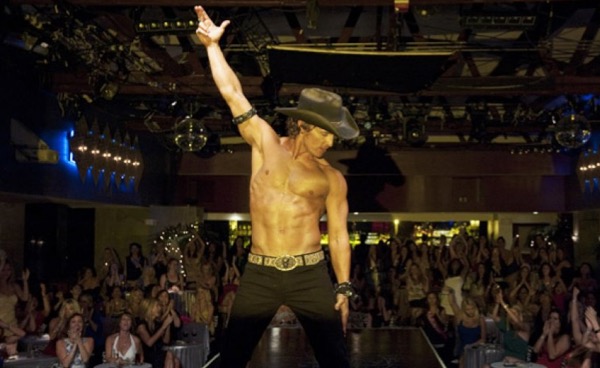 The scene was elegant at Crimson, with everyone in their awards season best, and just the star was about to take a bow for his work in Bernie

, the most disgusting tale of the week was told.

“While we were shooting Matthew’s script sequence, one very impassioned woman extra pulled his G-string off and tried to stick her finger up his butt,” Soderbergh said, according to Huffington Post. “And when I remembered that, I thought, You know, where I come from, you stand up for a guy who brings that kind of game to your movie.”

“I don’t think she was trying to stick her finger up my butt,” McConaughey said when he got on stage. “She was trying to put it somewhere, though, and you got it on film. It worked out.”

McConaughey switched gears and paid a lovely tribute to his wife, Camila Alves.

“I’ve got a great wife and a great family,” the father of three said. “And what I mean by that is I’ve got a woman that lets me go and pop in that bubble with blinders on, and I don’t have to feel like I’ve got to look over my shoulder, because I know the homestead is taken care of. And I even get quite inconsiderate, with reality as a whole, and she forgives me for that.

“That’s a great place to be, as an actor, to be able to go create and have that support. When you come home and think you may have a few demerits, and they say, ‘No, you’ve got credit.’”

Socialite Life debuted back in 2003. SL Flashback showcases some of our favorite content from years past. This article was originally published on January 9, 2012.