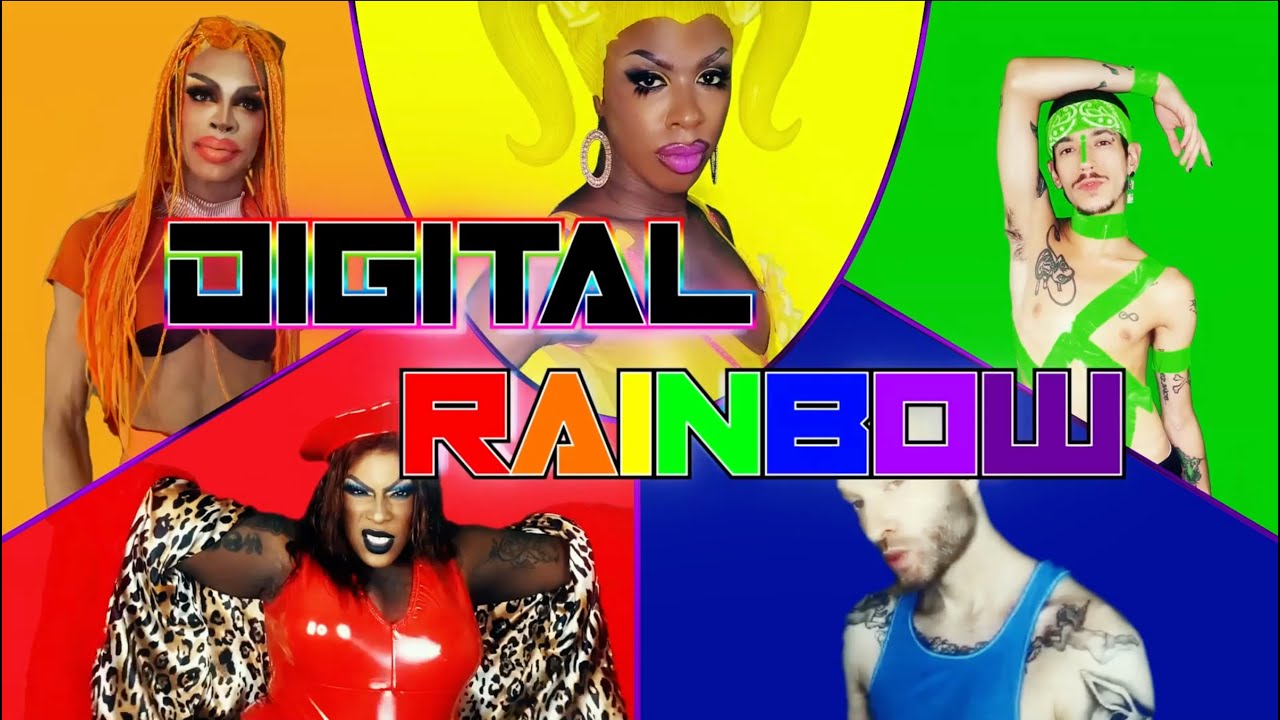 Hello, hello, hello, RuPaul’s Drag Race fans! It’s time to check in once again with your favorite queens in The Week in Drag. These performers have been working overtime to provide you with some holiday weekend entertainment guaranteed to bring the fireworks!

We just wrapped up Pride month, and if you missed the virtual celebrations, we’ve got you covered. We also have recaps of the “SheMZ” episode of All-Stars from some of the show’s most illustrious alums, first impressions of the cast of Canada’s Drag Race and so much more.

Let’s not waste another minute and let’s bring it to the runway!

Bob the Drag Queen and All-Stars season 2 winner Alaska talk about the tabloid TV-inspired challenge and camo fashions on the runway in the latest episode of “The Pit Stop.”

Raja, wearing an amazing bejeweled antler fascinator and Raven, serving some Boca Raton caftan realness, toot and boot (and even shoot) the camo fashions from the Drag Race runway on “Fashion Photo Ruview.”

Yuhua Hamasaki and All-Stars season 4 (co) champion Trinity the Tuck give you their take on the camo runway looks on “Bootleg Opinions.”

Our very own Southern peach, Nina Bo’Nina Brown, is giving us a yarn fantasy (I LOVE the eyebrows) and talking about the episode as only she can in another unfiltered episode of “Rawview.”

The always stunning Kimora Blac shares her thoughts and opinions on the episode on her very own recap.

I think one of the most fun recaps of All-Stars is season 4 winner Monét X Change’s “Xposé.” ON this episode, she talks about the queens’ “boy looks” for the “SheMZ” challenge and shares her unique take on the challenge and the runway. Her eye makeup is gorgeous and I need a tutorial, stat.

At long last, Trixie and Katya take on Netflix’s surprise reality hit Tiger King on “I Like to Watch.” They watched it so you don’t have to, but, if you got sucked into the reality series like I did, you will definitely enjoy the queens’ hilarious take on Joe Exotic, Carole Baskin and the gang.

Also this week, Trixie is back with another culinary creation made with the help of her Easy-Bake oven. This time she makes a Pride-themed 7-layer rainbow cake on an infamously recalled model from 2006. (Spoiler: it actually looks really good.)

Honey Davenport is back with a song that makes a perfect Pride anthem. She teamed with Yvie Oddly, Widow Von’Du, Cazwell and Jayse Vegas for the song and video for “Digital Rainbow.” The video is (not surprisingly) everything and is the perfect song for the summer.

In a statement, Honey says, “This song, produced by Chris Ambrose and Jayse Vegas, was recorded in our living rooms all in quarantine. The video, directed by Evan Zampella and edited by Dedalus Moving Pictures, was shot all on iPhone in our individual bedrooms. This is magic. This is what it looks like when you don’t let your conditions control your creation. I am so Proud of my team at BeeZee productions. Proud of my brothers and sisters Yvie Oddly, Widow Von Du, Jayse Vegas and Cazwell. Pride is so much deeper than a parade but me and my family thought everyone deserved a big gay dance party in their homes. That’s what digital rainbow is!”

Shangela, Trinity the Tuck, Eureka O’Hara, Latrice Royale, Nina West, and Kennedy Davenport bring us a much-needed message of hope in these turbulent times. They performed a cover of the Broadway classic “Tomorrow” from Annie, sung by Marisha Wallace. 100 percent of proceeds from the track, which you can stream or buy here, are going to Broadway Cares and MAD Trust to assist Broadway actors and singers whose work has been affected by the pandemic.

Last week, leading LGBTQ+ non-profit organization, the It Gets Better Project, presented their first “It Gets Better: A Digital Pride Experience” streaming live from the organization’s YouTube, Facebook and Twitch. The three-day digital Pride event, which was hosted by Peppermint and Scott Hoying & Mitch Grassi from Pentatonix, welcomed nearly 100k viewers and featured talent from genres such as fitness, music, gaming, DIY, and drag, including Melanie C, Jujubee, Rebecca Black, Benji Kroll, Crystal Methyd, and many more. And, thanks to YouTube, you can relive the entire event. It’s a great way to celebrate your holiday weekend.

Monét X Change hosted a #MyPride event last Friday where she chatted with Trixie Mattel, Heidi N Closet, and LGBTQ+ TikTok Trailblazers Beau + Matt and Cristian Davis about all things Pride. They discussed everything from personal Pride experiences to gender identity and it made for some fascinating viewing.

Joseph Shepherd chatted with Willam and Alaska for his “Exposed” series discussed themselves as “baby drag queens” their first Pride, attending Pride as a performer and spectator what Pride means to them . They also discuss the origins and success of their podcast “Race Chaser” and answer fan questions.

Joseph also sat down with Blair St. Clair for a very intimate conversation, where she talked frankly about revealing her past sexual abuse on Drag Race and the fallout she experienced afterward. Blair is extraordinary and if you don’t know much about her, this is a great place to start.

If you miss seeing your favorite performers live, some of them are heading to your town for a new show. Voss Events, the folks behind the Werq the World tour, is bringing you a new live experience, Drive ’N Drag, starring some of the most popular queens from RuPaul’s Drag Race.

Acid Betty, Aquaria, Asia O’Hara, Gigi Goode, Kameron Michaels, Kim Chi, Monét X Change, Naomi Smalls, Plastique, Vanessa Vanjie, Violet Chachki, and Yvie Oddly are sashaying to drive-in theaters where they will perform live on stage, with their sickening routines broadcast on the theater’s giant screens. Sound from the stage will be pumped through every car via FM transmitters.

The outdoor summer concert series will hold court July 17-19 at the Garden State Plaza in Paramus, New Jersey (20 minutes outside of New York City), and July 24-26 in Los Angeles. Multiple shows will run all weekend long from 12pm to 11pm. Additional shows are scheduled for Boston, Chicago, Seattle and Washington DC. Tickets are available now on the Voss Events website.

Scarlet Envy comes “Out of the Closet” and takes us on a tour of her drag room. Along the way, she shows off her fashions and wigs, discusses her tendency to show up with no pants on and her love of shoes. She also talked about going blind into Drag Race and her experience on the show. I could look at Scarlet all day. So handsome.

In the new World of Wonder web series “We Stan”, fan-favorite RuPaul’s Drag Race queens sit down for an intimate conversation with top musical icons to discuss their support and love for the LGBTQ+ community, celebrate Pride, and deep dive into their legendary careers. In the debut episode, Trinity the Tuck interviews Cyndi Lauper wearing a dress she handmade, which is a replica of the iconic look Lauper wore the first time she headlined Madison Square Garden in 1986. Cyndi Lauper is the best.

In the second episode of “We Stan”, season 12’s Jan talks with Kesha about Pride, her musical inspiration and her ongoing support of the LGBTQ community. Jan perfectly recreates Kesha’s 2018 Billboard Music Awards bohemian lewk and the two discuss their common religious backgrounds, working with Big Freedia and the story behind her song “We Are Who We Are.”

Two of our favorite All-Stars, Manila Luzon and Latrice Royale, have teamed up for some fabulous new projects. The pair released a fun animated video for their new song, “Robbed.” The pair engage in an action-packed heist and recruit another beloved Drag Race queen as their getaway driver.

Manila and Latrice also have a new podcast from Forever Dog and Moguls of Media (a/k/a Willam and Alaska). On “The Chop”, the dolls recap and review every episode of Canada’s Drag Race and more. They also “chop it up about drag queens on tv, runway fashion and beauty, and queer culture around the world.”

Willam loves a good snack and, in this video, she stuffs herself into a fridge and taste tests some of the new offerings from UnCrustables. You kind of have to see it to believe it.

Season 12’s Rock M Sakura brings us a makeup tutorial to show you how to recreate her signature “bubblegum, K-pop, sparkle fantasy” face.

RuPaul’s Drag Race UK’s Divina De Campo has released a new video for her song “Gratify” from her DECODED EP. The song is a banger and the video is visually stunning.

This week saw the arrival of Canada’s Drag Race. (Did you watch?) The Canadian queen-testants took part in the ASMR craze, making soothing sounds with drag essentials like wigs, leather boots, jewelry rhinestones and more.

Raja and Raven gave us a bonus Fashion Photo Ruview this week, ranking the promo looks of the contestants of Canada’s Drag Race.

Need more content about our queens from the Great White North? Check out Yuhua Hamasaki and Shuga Cain discussing our newest queens’ promo looks on a special episode of “Bootleg Opinions.”

Wow, that was a lot, wasn’t it? We will be back next week with even more. I leave you this week with my favorite video of the week. If you love Lady Gaga and Cats, you will love Alaska’s “Catmatica.” Until we meet again, stay healthy, stay safe, and say LOVE!