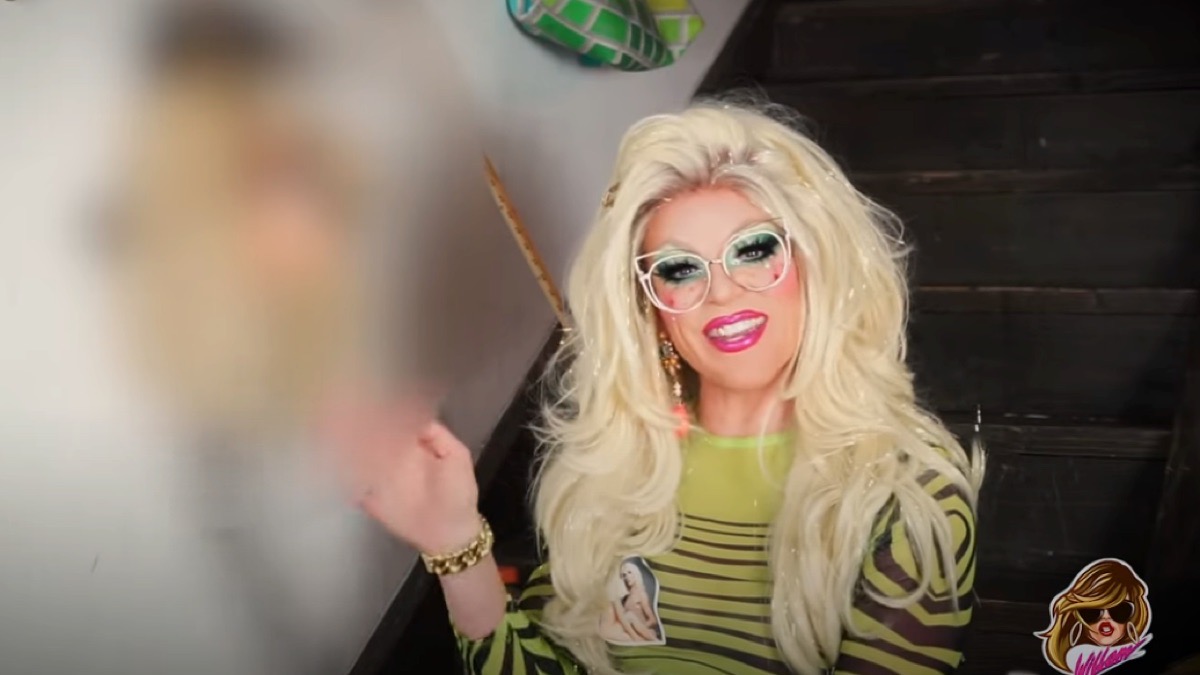 Hello, hello, hello! We are back with the latest news from the RuPaul’s Drag Race universe.

This week, Drag Race alums discuss the Madonna-themed episode and Michelle Visage-inspired runway and we got to know more about this week’s eliminated queen in some great interviews. We also have new music from an All-Star, some tutorials about getting both in and out of drag and the return of one of our favorite drag-based reality shows. Let’s get to it!

Last week, the queens paid homage to Madonna in song form and to Michelle Visage in fashion form. Bob the Drag Queen and Aja discuss the episode on “The Pit Stop.”

Raja and Raven toot and boot the “glamorously cheap” Michelle Visage tribute fashions and throw the judge a little shade, on the latest “Fashion Photo Ruview.”

Nina Bo’Nina Banana Fofanna Brown is back for another “Rawview”. Always a queen who likes to keep it fresh, she has a new opening segment, paying tribute to Brandy’s series Moesha, serves us a fierce, peacock-inspired look, thanks her fans for their support and shares her unfiltered, honest opinions about the episode.

Miz Cracker cuts up, kikis with Brita and channels Jim Broadbent’s character from Moulin Rouge on “Review w/tag/brita-filterith a Jew.” She’s kind of crackers, and I love it.

Over at “Bootleg Opinions”, Yuhua Hamasaki welcomes her guest, season 10 queen Kalorie Karbdashian Williams, and the pair discuss the fashion hits and misses.

Lastly, Jaymes Mansfield recaps the episode – as she remembers it – giving us metallic cone bra Madonna realness on “Not Another Drag Race Recap.”

She may not have won the Madonna challenge, but Jan won my heart on the latest video from her “Jan’s Jukebox” series. Jan serves up some 80s workout eleganza as she sings last week’s lip-sync song, “Burning Up.” As much as I love these, I wish she would sing the whole song, because I, for one, can’t get enough of Jan singing.

Michelle Visage chats with this week’s eliminated queen, Brita, on “Whatcha Packin’?” Brita talks about the importance of foundation garments, dealing with life after the show and what’s next for her as well as her regrets during the time she was on the show, (spoiler, it’s the Snatch Game.) We also get to see a few of the fashions she didn’t get to showcase on the runway, including one that spotlights her Polynesian heritage, a stunning waterfall gown and a delicious purple creation highlighted with latex and ruffles. After watching Brita’s interviews this week, I feel like she got a villain edit, as she is utterly charming in conversation.

In another video proving how awesome she is, Brita shows how she created her pretty in pink makeup look for the “Buttons and Bows” runway in this tutorial.

TLC is bringing back the reality/transformation show Dragnificent, starring Jujubee, Thorgy Thor, Alexis Michelle and Bebe Zahara Benet. In the premiere episode, which airs tonight on TLC at 11pm, the queens coach a bride and work to ensure that her big day is magical. Entertainment Weekly features a clip showing the dolls helping the bride-to be find a dress to say yes to. I’m so glad this show is back.

Love Connie once again puts the Pit Crew through another workout, complete with some pretty impressive “Connie kicks” in the latest episode of “Oh Pit Crew.” In this week’s challenge, the fellas pack their boxers with eggs and do some high kicking. When there aren’t eggs in their pans, is there anything else there? Find out if the guys do a little stuffing and just enjoy this post-Easter treat.

Drag Race UK’s champion, The Vivienne, has hit YouTube and released her first video. What better way to get to know this queen better than by seeing how she creates her signature look? Check out this entertaining makeup tutorial and get to know The Vivienne. She’s kind of fabulous.

Speaking of entertaining tutorials, you must watch as Bob the Drag Queen recreates Silky Nutmeg Ganache’s trademark look – complete with eyebrows crafted by Sharpie. With applying hairspray very close to her eyes, Bob is entering the danger zone, so don’t let her efforts be in vain, check out this video.

Bob and Monét X Change talk about all kinds of topic on the latest episode of “Sibling Rivalry.” The pair discuss musicals, funny voices, Monét’s affinity for apples and lots more. They also share their love for the Legally Blonde musical, high school frats, performing in musical theater and dancing in high school and who would play who in the “Sibling Rivalry” musical. Give it a listen.

Speaking of musicals, this week’s “must-see” video has got to be Nina West’s impressive, quarantine version of “Cell Block Tango” from the musical Chicago. Using wigs and her over-the-top talent, Nina plays all of the roles to perfection.

If you need inspiration in the kitchen, you’re in luck because “Silky’s Snack Shack” is back! On the latest episode, Silky whips up shrimp po’boys and macaroni salad with the help of Miss Vanjie and Miss Shangie! The trio are obviously having a blast – which could possible be a result of the “2 Kweens, 1 Cup” cocktail Silky creates – made up of Hennessey, sweet tea, vodka and lemonade. Get ready for one intoxicating visit to Silky’s kitchen.

Baga Chipz and The Vivienne are back with another episode of “I Like to Watch.” This week, they react to the Netflix series The Stranger.  I haven’t watched the show, but if I could watch it with these two, I definitely would.

Valentina has released her second single, “All Eyes on Me.” The bilingual song is the perfect cure for the quarantine blues. Of the tune, Valentina told World of Wonder, “This was all done with lots of passion and lots of love. I hope you all enjoy it and support me in this journey with music.” You can access the song wherever you stream your music.

Derrick Barry and Kimora Blac serve us naughty bunny looks and are tested on all things Easter in the latest episode of “Wait, What?” Do they know the country that originated the tradition of dyeing eggs for Easter? Do they know which President started the traditional White House Easter egg roll? Tune in and find out.

Looking for a project to keep you busy while you’re cooped up at home? Get crafty with Willam as he creates what he calls “vegan taxidermy” on the latest episode of “Crafternoonting.” Me and DiY crafting are not a good match, but this video has truly inspired me (and I love the Muppets.) Watch and get a little creative inspiration of your own.

Trixie Mattel reacts as only she can, with lots of self-effacing humor, to a “vintage” makeup tutorial from 2009. To say she’s evolved from her early days in drag is an understatement (and baby Brian is such a cutie.)

It’s a well-known fact that Trixie loves to collect dolls. She shows off some of her acquisitions from the 1960s, including a couple of cooking Barbies, a talking PJ and the rare Black Francie (the first African-American member of the Barbie family) in “Decades of Dolls.”

The lovely Honey Davenport is back with another episode of “Da Fuq.” She and her guest, Brita, discuss some random (and sometimes wild) topics, including survival in the Alaskan wilderness, pee talk, electronic larynxes, mummies and lots more.

Shangela had dipped into the vault to bring us the gift that keeps on giving – the gift of laughter. The true “star” of “Star is Born,” Shangie shared her stand-up comedy special featuring her alter ego, the “postmodern pimp-ho” LaQuifa, called “LaQuifa is Halleloosin’ It.” The show was taped at New York City’s XL Nightclub in 2012 and is still as funny as it ever was. Do yourself a favor and let this queen make you laugh.

Miss Coco Peru is finally, once again on camera for another of her “Coco Thoughts in Solitude.” Here she shares tales of naughty plates and growing up Catholic. She also tells us why it’s important to embrace our inner whore. I adore Coco and love to hear her stories, you should definitely give the whole series a listen.

Kimora Blac is serving a stunning look created with nude hues, paying tribute to Raven. She is just gorgeous and I wish I could beat my mug like this.

We’ve seen lots of videos of queens applying makeup, but not many of them getting out of drag. Enter Violet Chachki. In this reverse tutorial, our season 7 champion “de-drags” – she takes off her makeup and shows how she cares for her skin after all of the shaving, and makeup applications.

Jaymes Mansfield is back with another magical wig transformation. This time she takes a glittery wig from her own collection and recreates Normani’s locks from her “Diamonds” music video.

Good news for all of you drag fans jonesing to see your favorite performers doing what they do best, Digital Dragfest is still going strong, with shows through April 30th.  There are still plenty of chances to see the queens from the comfort of your home. April 21 is “Drag Out the Vote “ day, with performances from Ginger Minj, Brita, Alaska, Jackie Cox and Jan. There are also upcoming shows starring Drag Race UK’s Blu Hydrangea, Divna DeCampo, Baga Chipz, Crystal and Cheryl Hole as well as All-Stars alums including Jujubee, BenDeLaCreme and Pandora Boxx (join me!) Don’t miss out on all of the fun and ferocity now through April 30. Details and tickets are available on Stageit.com.

That’s all for this week! Until we meet again, stay healthy, stay safe and say LOVE!