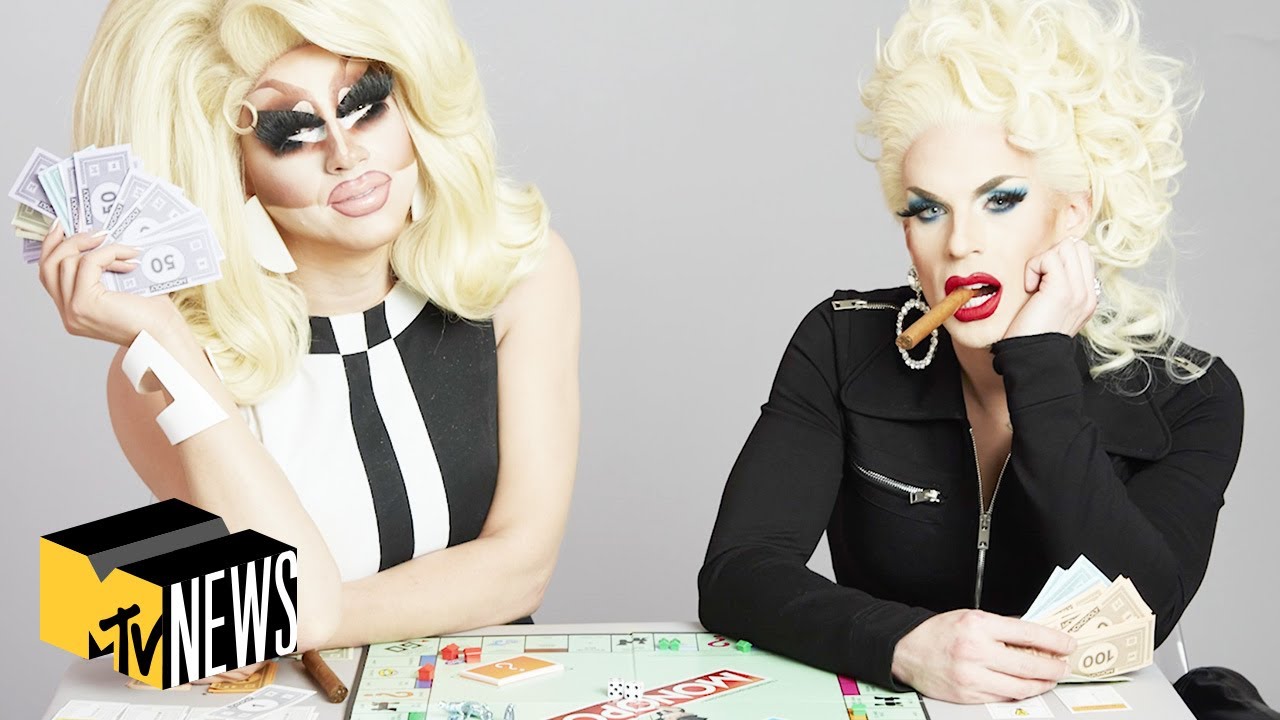 Hello, hello, hello! Welcome to another week in quarantine edition of the Week in Drag with our favorite queens. The Backyard Ball episode of All Stars drew lots of reactions from our recappers and they had lots to say about the country fried fashions on the runway.

We also check in with Trixie Mattel and Katya as they debut their new book and share sage advice, chat with our eliminated All-Star and learn lots more about season 10 stunner Kameron Michaels in a fantastic, in-depth interview. Let’s bring it to the runway!

On Monday, Logo announced that it would be airing the latest Drag Race spinoff, Canada’s Drag Race. The series will make its US debut on Monday, July 27th at 8PM ET/PT. Hosted by Season 11 runner-up and Canadian local, Brooke Lynn Hytes, the Canadian spin-off serves elements of the classic fan-favorite series with the addition of a healthy dose of Canadian maple shade.

Twelve of the fiercest queens in the land come together to showcase their Canadian charisma, uniqueness, nerve, and talent to compete for the title of “Canada’s First Drag Superstar,” and a $100,000 prize.

The premiere will follow a few days after the RuPaul’s Drag Race All Stars season 5 finale airing Friday, July 24th at 8PM ET/PT on VH1.

Bob the Drag Queen and Raja join forces on the latest “The Pit Stop.” These two former champions hold nothing back as they discuss the goops and gags of the Backyard Ball episode. Bob has been knocking it out of the park this season and her co-host game has also been really strong.

Coming to you next on the virtual staaaage, Raja and Raven are back to toot and boot the “country cousin” and Backyard Ball looks on this week’s “Fashion Photo Ruview”.

Yuhua Hamasaki is riding solo this week for her “Bootleg Opinions” web series. With her critiques and commentary, she proves she’s a star on her own, she doesn’t need a co-host.

Monét X Change, looking oh, so cute with a Parisian-inspired look (and her sparkly eye makeup is everything) gives us her uniquely Monét take on the Backyard Ball on “Xposé.”

Nina Bo’Nina Brown, who just celebrated a birthday (Happy Birthday, Nina!) is serving us magical rainbow unicorn realness and sharing her unique (and, of course, raw) take on the latest episode of All Stars in the newest installment of her “Rawview” series.

Trixie checks in and kikis with the remaining queens of All Stars behind the scenes of the Backyard Ball. The rapport between these dolls is hilarious and I vote that Trixie does backstage color commentary and interviews for all Drag Race shows moving forward.

Our eliminated All Star Alexis Mateo addressed the escandalo between she, India Ferrah and Shea Couleé and talked about the inspiration behind some of her stunning runway fashions on “Whatcha Packin’?” with Michelle Visage. As one of my favorite season three queens, I’m glad she had this chance to give us her side of the story, and she is just fantastic. BAM!

Alexis also talked to Entertainment Weekly, focusing on the conflict between she and India Ferrah and the fallout of their televised tiff. When talking about the often toxic Drag Race fandom, she said, “I was disappointed with the fanbase of the show — not my fanbase. The new generation has been so mean. We do something because we love it so much, and it becomes our biggest nightmare. It has been a difficult time for all of us. I know how stressed out we were to not say the wrong things because the fandom has exploded into a hate generation. It’s scary to hear people you think are your fans saying, ‘I used to like you last episode, but today I hope you die’.”

Last week, we got a tutorial on drag slang from Bob the Drag Queen and it’s time for another lesson. Your instructors this week are the queens of All-Stars 5. Again, you’re not likely to learn anything new, but it’s great to see the dolls together again.

The musical Trixie Mattel shows off her guitar collection and tells the stories behind them (and offers a few for sale) in this video for Reverb.

Katya and Trixie are on the press tour for their new book Trixie and Katya’s Guide to Modern Womanhood and have blessed us with some hilarious chats. If you have the time, all three interviews are an absolute hoot, and, if you’re anything like me, they will fill the “UNHhhh” sized-hole in your heart. Check out their chats with ET Canada and Entertainment Tonight as well as their MTV News interview below…and buy the book!

The fabulous Asia O’Hara is back with another episode of “10s Across the Board.”  This week, she takes a look back at the top stunts and reveals on the runway. Yes, Roxxxy’s amazing wig reveal is here, along with some of the other unforgettable moments that had us gagging.

Season 10’s “Bodybuilder Barbie” Kameron Michaels is the latest queen to be “Exposed” by Joseph Shepherd talks about her childhood, transitioning from go-go dancing to drag, reveals her original drag name and spills tea about her Drag Race experience. She also spills the tea about her “social media meltdowns.”

If you’re looking for a way to spice up your wardrobe while still remaining safe at home, let Willam help. In the latest episode of “Crafternoonting”, she’s back with more t-shirt makeovers, showing you an easy-to-do loop system to make your tees fierce (and, in the case of a Lynyrd Skynyrd shirt, less racist.)

Honey Davenport is back with another episode of “Da Fuq?” and this week, mother has arrived! Season 6 queen Vivacious (without Ornacia) is Honey’s guest and the pair, looking fierce, discuss random topics including floating feet, outrageously tiny apartments, living in New York City and lots more.

Trinity the Tuck is the guest on this week’s Alt.Pop.Repeat podcast. Joining hosts Marie Nicola and Chrissy Newton, Trinity discusses her personal connection to drag from her earliest experience in Alabama to her opinion on drag’s future trajectory, along with her thoughts on diversity in drag beyond the world of RuPaul’s Drag Race, including the emergence of Bio-Queens and the significance of the new trend of digital drag performances. She also talks candidly about her controversial RuPaul’s Drag Race All Stars season 4 win alongside co-hall of famer, Monét X Change. You can listen to the episode here. The show can also be found on Spotify, Apple Podcasts, YouTube and Google Podcasts.

Well, that’s it for this week. I’m leaving you with a treat from Tammie Brown. In the latest episode of “It’s Tammie Brown”, our favorite kooky queen shares tales from Hollywood’s Golden Age, including the death of Jayne Mansfield and the feud between Bette Davis and Joan Crawford, plastics in the ocean and saving the whales. I don’t know about you, but I could listen to her all day long. Have a great week and stay healthy, stay safe, remember that Black Lives Matter and say LOVE!