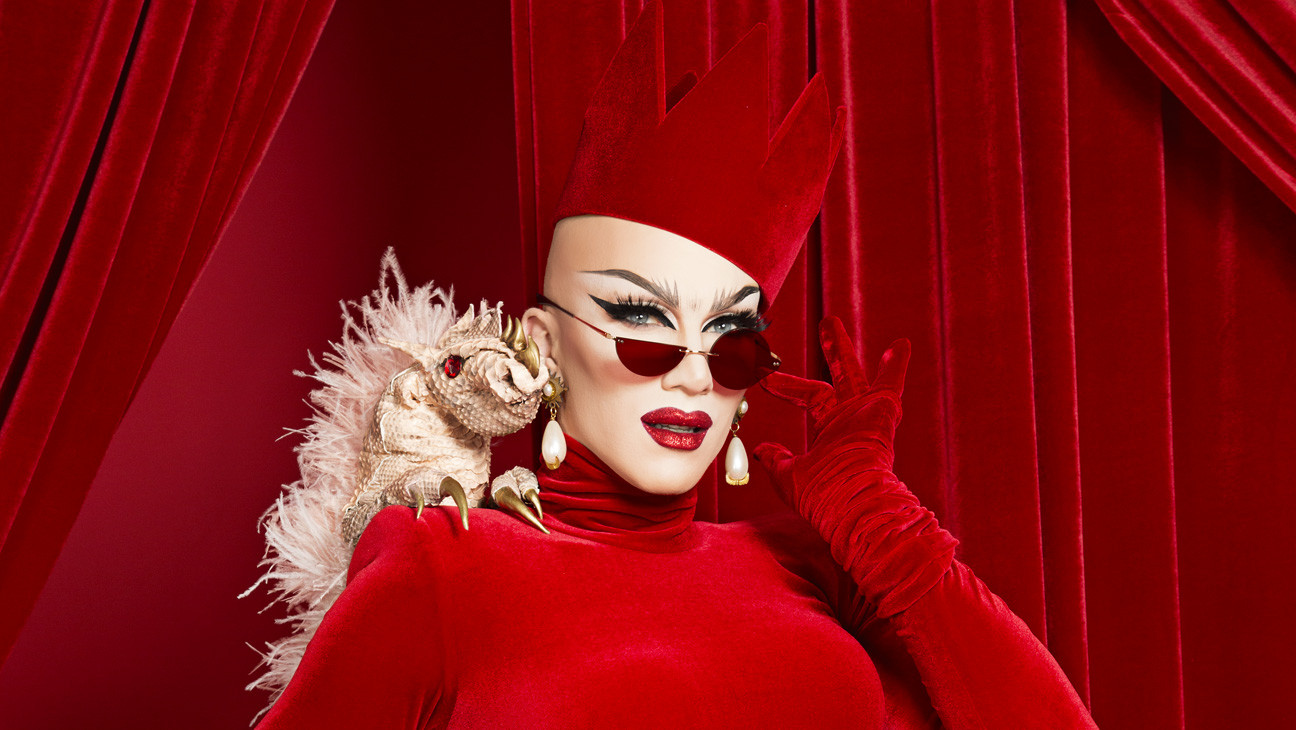 Hello, hello, hello! The Week in Drag is back with more news from the queens of the Drag Race universe…and beyond. Halloween might still be a few weeks away, but the queens are already filling your baskets with lots of treats.

Mark your calendar and prepare yourself for virtual and drive-in shows to help you celebrate the spooky, holiday with some of your favorite, fierce queens. Along with the frights, we’ve got delights from Trixie Mattel, Katya, Monique Heart, Honey Davenport, and Coco Peru. There is lots to get to, so let’s not waste any more time. Let’s bring it to the runway!

Ready for some spooky Halloween fun? Nina West is continuing her reign as the Queen of Halloween with the first-ever digital production of her show “Heels of Horror.” For 12 years, Nina has written, produced, and performed a Halloween Variety show live in her hometown of Columbus, Ohio. Fans would come from all over the US to see the show, selling out tickets in a matter of hours and raising over $1million dollars for LGBTQ+ charities. Unfortunately, due to COVID, Nina had to make her show virtual, but in doing that, she gave fans around the world the chance to see this freaky, fierce and fabulous show.

The entirely new show is split into 3 episodes each featuring a different Halloween theme. They will be streamed exclusively via a ticketed event on VIMEO and will feature some of Columbus’s finest performers as well as special guests Sydney James Harcourt (Original Hamilton Cast Member on Broadway), Jennica Tastrophe, Gretta Goodbottom and The Skeleton crew, Jamz Dean and surprise cameos from the world of stage and screen. Donations made during the show will benefit Equitas Health, a regional non-profit health system serving the healthcare needs of the LGBTQ+ in 13 cities in the Midwest.

Nina says, “I’m so excited to continue the tradition of Heels of Horror with an all new Digital show.” I went back and forth on how to provide a safe and fun in person event that would be both memorable and safe as I have with the past 12 years. Ultimately the safety of my performers and fans won out. There are tons of surprises in store, even some Tricks and Treats! Tune in Beginning October 28th ! You won’t want to miss it!”

Tickets that include all three episodes are just $30 and are on sale at www.vimeo.com/ondemand/heelsofhorror.

The Boulet Brothers bring back “from the dead” some of the top contestants from all three seasons of Dragula for a new special airing on Shudder. In the Halloween horror movie /reality competition hybrid The Boulet Brothers’ Dragula: Resurrection, seven cast members from Dragula‘s first three seasons will return to vie for $20,000 and a chance to return for season 4 of the Boulet Brothers’ hit series. And, ahead of the project’s October 20 debut, Entertainment Weekly revealed which queens made the cut for the two-hour Resurrection all-star edition: Frankie Doom (season 1), Loris (season 1), Kendra Onixxx (season 2), Dahli (season 2), Victoria Elizabeth Black(season 2), Priscilla Chambers (season 3), and Saint (formerly St. Lucia, of season 3).

The special episode will “pit the ladies against each other in an unprecedented, ghoulish pageant filmed over two months earlier this year, with strict quarantine measures in place to protect both the cast and crew from the coronavirus pandemic while still satisfying the macabre series’ core aesthetic tenets: fierce drag, filth, horror, and glamour.” A five-person crew travelled to the contestants’ hometowns to film them in self-styled-and-designed performative vignettes in pursuit of the prize — all strung together by the series’ signature scripted (and terrifying) cinematic shorts starring the Boulets.

If you want another chance to see your favorite queens celebrate the season, Drive ‘N Drag: Halloween is still going on through the end of the month. This means you’ve still got time to catch Asia O’Hara hosting a spooky revue with Drag Race faves Yvie Oddly, Aquaria, Kameron Michaels, Kim Chi, Vanessa Vanjie and Violet Chachki. The queens star as trapped spirits who have all have died from obscure causes: a car accident, food poisoning, burned at the stake…

Each soul will share her chilling tale in an immersive stage performance in the outdoor concert series that runs through October 31.

Everyone will get the live theatrical experience from the safety of inside or on top of their cars with concert style stage and lighting, Jumbotron screens and sound pumped outside from the stage and through every car via FM transmitters. Multiple shows will run all weekend long, from 12PM to 11PM. Drive ‘N Drag: Halloween tickets are available now on VossEvents.com.

When you think of Halloween queens, season 4 champion Sharon Needles has to be at the top of the list. Sharon is bringing her witchy ways to a virtual Halloween shows, courtesy of Club Cumming‘s new online series. “Mask It or Casket!” promises the camp and fun of specials past (like the iconic Paul Lynde Halloween Special) and features special guests Amanda Lepore, Real Housewives star Countess Luann, and fellow Drag Race alumna Alaska, Peppermint, Aja and The Vivienne. The show streams on Thursday, October 29 and repeats on Halloween. Get your tickets and don’t miss the spoopy fun!

If you want another great costume idea, look to Bob the Drag Queen, who serves up some Uncle Fester from The Addams Family, but make it glam realness.

And of course, the queen of makeup, Trixie Mattel, creates a fantastical, fantasy look using Wet ‘n’ Wild’s Fantasy Makers collection. The devilish result is fierce and has us seeing red.

The fashionable Sasha Velour is interviewed by Vogue about her new Zine, a glamorous take on the horror classic Creature from the Black Lagoon called Creature from the Vinyl Lagoon. Proceeds from the sales of the pub are benefitting the Queer Detainee Empowerment Project, which assists LGBTQ+ people who are coming out of immigration detention.

Sasha, who admitted she’s fascinated by monsters, says of the project, “There’s something about being a costume professional year-round that makes Halloween a little bit less appealing, but I always try to deliver.” And, like the champion she is, she does. You can order Creature from the Vinyl Lagoon now through Sasha’s website.

At last, we find out if Monique Heart makes it to her Hamburger Mary’s gig on the last exciting installment of “Manic Moments.” Let’s hope for more of these in the future, as I love Monique and am always more than happy to see her on my computer screen.

The Week in Drag – All-Stars 5 Queens Are Revealed, Digital DragCon Highlights, Willam vs. A Watermelon and Lots More

Honey Davenport hosts an evening of fabulous queens, including fellow Ru girl Yuhua Hamasaki and some performers who should be on an upcoming season of Drag Race in “Something of a Different Color.” (Skip to 26:45 to catch the show and tip those queens!)

Heidi N Closet welcomes a shhh-pecial guest to her YouTube channel. Watch as she is transformed by the essence of beauty, season 12 champion Jaida Essence Hall on the latest episode of “Dragged Out.”

Speaking of transformations, Monét X Change is here to show you how she creates her go-to, smoky, glittery eyes. Watch as she creates a vibrant, violet fantasy.

Trixie and Katya have once again expanded their ever-growing media empire with the introduction of their new podcast, “The Bald and the Beautiful.” The show is set to explore the culture boundaries of modern beauty through interviews with gorgeous guests who inhabit various facets of the beauty industry. From models, moguls, influencers, drag queens, adult performers, actors, and more, Trixie and Katya break down the beauty behind it all.

When asked to describe the podcast, Trixie said it will feature “screaming, wheezing, cursing, and occasional speech. Hairless, careless, and covered in urine. Two actual supermodels interview the horribly ugly,” with Katya adding “I will finally be able to tell a story without being rudely interrupted.” Check out the premiere episode here and listen to new episodes every Tuesday. You can tune in on Apple Podcasts, Spotify and Stitcher.

Trixie and Katya have more to share to entertain you this week. Check out season 11 outtakes from their hilarious web series “UNHhhh.” Random topics include hemorrhoids, laughing at horror movies, fast passes at theme parks, Celine Dion and working at Dairy Queen. The pair also answer random fan questions Even out of context, these two never fail to make me laugh. A lot.

I will never not post a video featuring my favorite Canada’s Drag Race queen, the amazing Jimbo. Here she meets up with UK drag legend Juno Birch and gets a family makeover. Is the world ready for Jimbo Burch? (I definitely think it is!)

The lovely Sum Ting Wong pays tribute to her fellow Drag Race UK queen, The Vivienne, with this amazing makeup transformation. The rainbow-hued eyes are everything and the champion approves in a sweet, post-makeover call.

Earlier in the week, Sum Ting donned a red wig and a silver dress to complete her transformation into top three UK queen Divina De Campo (who says she’s working on a Christmas album!)

Jaymes Mansfield is kicking off her October wig transformations with a glam makeover of a vintage wig she picked up on eBay. Watch how she turns a “70s house frau” look into a classic barrel-curled updo.

Coco Peru shares her memories of seeing the classic movie Victor/Victoria in this sweet video. As someone who adored this movie, I loved hearing Coco’s thoughts on it and, as an added treat, she lip-syncs Lesley Ann Warren’s performance of “Chicago, Illinois” from the movie.

That’s it for this week, but, don’t fear – we’ll be back with news, updates and all of the eleganza you can handle. I’m leaving you with Atlanta’s own Nicole Paige Brooks (from season 2) performing a song that is the perfect accompaniment to our current situation – and it’s always a delight to see Nicole (how about an All-Stars run?) Until we meet again, stay healthy, stay safe, VOTE and say LOVE!