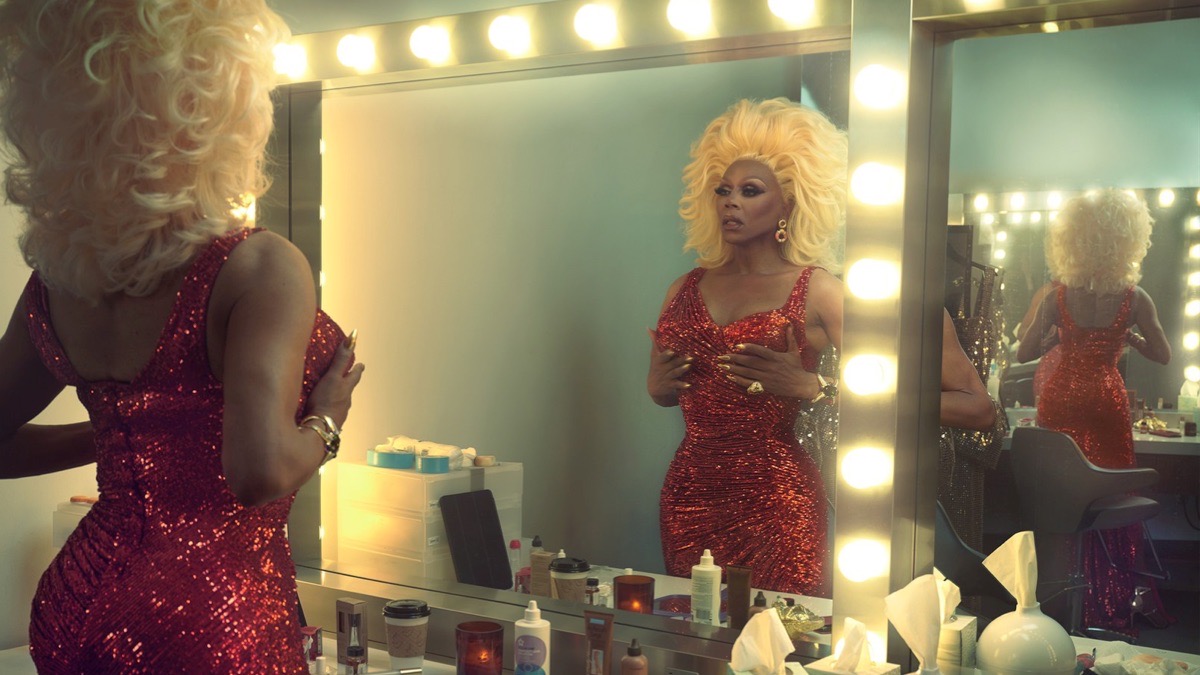 This week, we recap the drag family makeover challenge on DRUK with our favorite podcasters and Drag Race alums, learn some new makeup tricks and hear from RuPaul herself, in a fascinating set of interviews.

In addition, we’ve got gift ideas to help make the holiday season even brighter. Let’s hit the runway.

For those of us eagerly awaiting the debut of Ru’s new scripted comedy, AJ and the Queen, I’ve got great news. Netflix released the first teaser for the series this week and a premiere date – January 10. I don’t know about you, but I cannot wait for this one. Ru as a redhead is everything.

Speaking of AJ and the Queen, Mama Ru sat down for an in-depth (and fantastic) interview with Vanity Fair and is the cover girl for the magazine’s January issue. Come for Ru’s words of wisdom, stay for the gorgeous photos by Annie Leibovitz.

When asked if he felt drag would ever be truly mainstream, Ru said, “A superficial aspect of drag is mainstream. Like, the ‘Ooh, girl’ or ‘Hey girlfriend!’ or ‘Yaaas.’ That’s mainstream culture,” he says. “But true drag really will never be mainstream. Because true drag has to do with seeing that this world is an illusion, and that everything that you say you are and everything it says that you are on your driver’s license, it’s all an illusion. Most people will never in their lives understand what that is. Because they don’t have the operating system to understand that duality.”

Ru also did an accompanying video interview for the magazine, discussing identity, family, culture and work in a feature called “RuPaul Answers Increasingly Personal Questions”. He shares a lot in these interviews and they only serve to make me love him even more (especially as a fellow Bee Gees fanatic.) Call me, Ru. Let’s do lunch.

And now, back to our regular programming. Lots of folks had lots to say about the latest episode of Drag Race UK. Mano Agapion and Travis Coles discussed thee runway’s highs and lows on “Drag Her” and, of course, Willam and Alaska had plenty of tea to spill on “Race Chaser” (and “Hot Goss” too!)

The top three queens of Drag Race UK (who, in case you didn’t know, are Divina De Campo, Baga Chipz and The Vivienne) were the subject of a photoshoot and interviews with Grazia. In a fun Q&A, the queens answer burning questions such as “Boobs or bum?” and “Dolly or Cher”? The queens also rate celebrity drag from the likes of Jude Law, Andrew Garfield and judge Graham Norton.

Raja and Raven spill the tea about the drag makeovers they did on Drag Race while doling out toots and boots to Drag Race UK‘s family makeover runway challenge on the latest “Fashion Photo Review.”

The delightful Shuga Cain joins Yuhua Hamasaki to discuss the family fashions from the latest Drag Race UK runway on the latest episode of “Bootleg Opinions.” God, I miss Shuga.

Willam takes us to her Palm Springs home (that she got on House Hunters…and I thought that was all “for TV”) and shows us how to create a rock sculpture (after a few attempts) on “Crafternooning with Handy Man Dan.” I think I would definitely be more of a DiY kinda gal if I had Handy Man Dan to help me out. This is just four minutes of goofy fun.

Holiday shopping season has already begun and if you’re having a hard time finding something for that hard to shop for friend or relative, Cameo has the gift for you – and it benefits a good cause. A number of Drag Race stars, including Pandora Boxx, Manila Luzon and Darienne Lake – and Drag Race UK queens Divina De Campo and Cheryl Hole – will record a personalized message for your loved ones and Cameo is donating 5% of each video booked from now until December 15 to (RED), an organization dedicated to ending AIDS. The site boasts lots of other celebs participating in this special promotion including Billy Porter from Pose and Bobby Berk from Queer Eye. See all of the celebs and book your video at Cameo’s website.  (Side note: Cameo videos are a great gift. I got a video from Coco Peru for my mom’s birthday and she still can’t stop talking about it.)

Need another great gift idea for the Drag Race fan in your life? World of Wonder has got some amazing Black Friday/Cyber Monday specials for you. Treat your loved ones to RuPaul’s Drag Race Live! in Las Vegas, DragCon LA or DragCon UK at reduced prices. You can also give the gift of WOW Presents Plus and plenty of great merch, all at great prices. Putting these gifts in the stocking is sure to get you on Santa’s “nice list.” For more information on WOW’s Black Friday and Cyber Monday deals, check out their website.

If you have makeup fanatics on your holiday shopping list, make sure to check out the Coverboy Black Friday event. Willam will join Nicole Byer, for makeovers, giveaways and special offers on his fantastic line of glitters, lashes and lipsticks. Check out all of the fun at shopcoverboy.com starting at 3pm PST/6pm EST on Friday, November 29.

I think if you are sent to hell, you are doomed to an afterlife of putting together furniture from IKEA. Proving what a pain in the butt this process is, may I present the latest episode of “Can Do Queens”? Watch Asia O’Hara and Kameron Michaels lose time, nails, parts and almost their minds attempting to assemble a vanity. A warning: Asia’s gospel-inspired theme song will get into your head.

If you’ve ever been curious about what drag queens have in their luggage when they are on tour, Trixie Mattel is here to satisfy your curiosity. Join our favorite “Skinny Legend” as she shows us what’s in her bag. I am showing this to my SO, who thinks I have too much makeup because I can’t hold a candle to what Trixie carts around.

Speaking of makeup, Ariel Versace is taking on her drag daughter, Volkie, in a “beat battle”. This week, the two face off to create the best look with MORPHE’s Hit the Light palette. The resulting looks are pretty fierce, and it’s a draw in my humble opinion. Check it out for yourself.

As much as I love Ariel’s drag looks, Raven’s makeovers for “Wet n’ Wild Presents” are the bomb. Of course, she is making over already beautiful women, like the artist in this latest video, but her tips are solid (I have never had better-looking lashes since I used her mascara advice.) In this video, she gives the lovely Coco a sunset-inspired eye with the cosmetics company’s new 40th birthday palette.

Have you seen the latest trailer for the big-screen adaptation of Cats? If seeing that hasn’t put you completely off felines, enjoy Jinkx Monsoon and Kamikaze talking about the furry monsters on “Cool Mom.”

That’s it for this week. Until we meet again, everybody say LOVE!