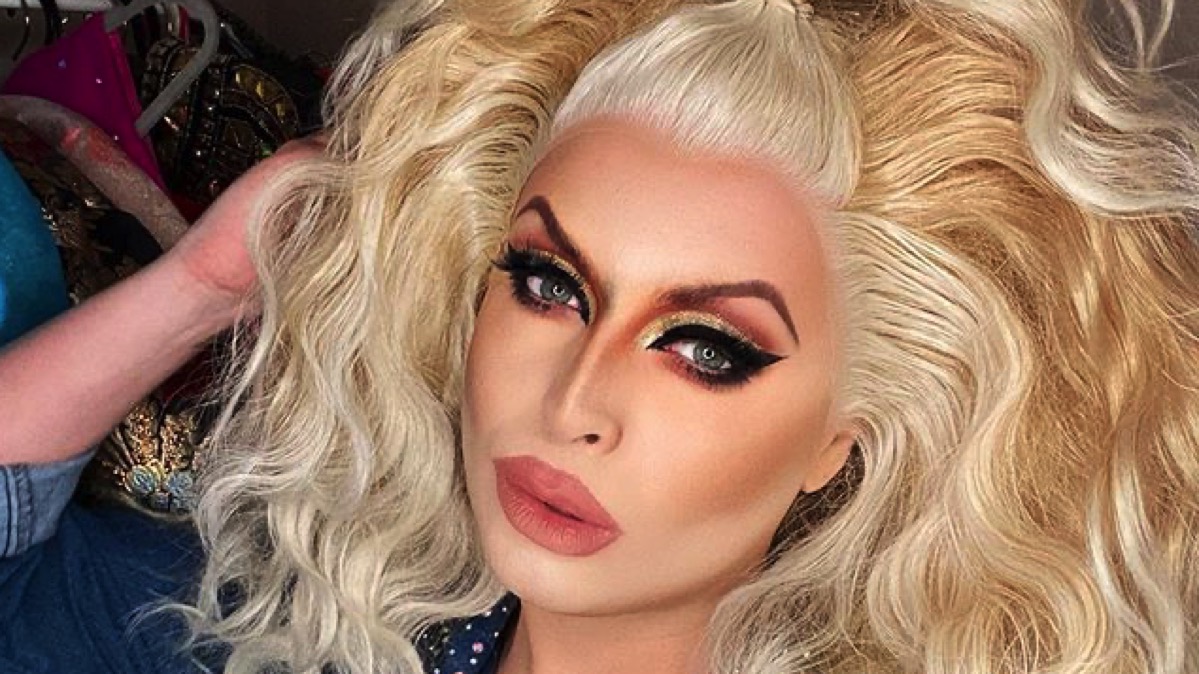 She refers to herself as the “mediocre queen from Essex”, but the stunning Cheryl Hole is anything but.

This engaging and entertaining performer used her charisma, uniqueness, nerve, and talent to make it to the top 4 of the premiere season of RuPaul’s Drag Race UK. From her Snatch Game take on The Only Way is Essex’s Gemma Collins to excelling as part of Filth Harmony in the girl group challenge, she served fierce looks and a whole lot of heart.

Cheryl isn’t resting on her Drag Race laurels, she’s hard at work on a new podcast, where she talks about a subject near and dear to her heart. On Girl Group Gossip, produced by World of Wonder, Cheryl and a special guest analyze and assess some of the most iconic girl groups in herstory. Her fellow Drag Race castmate Blu Hydrangea was the guest on the premiere episode, which debuted on July 9 (and which you can listen to here.)

Cheryl is a queen in the truest sense of the word, and she graciously took the time to chat with us about Girl Group Gossip, her experience on Drag Race UK, and answer the Socialite Seven.

First off, congratulations for making the top 4 on RuPaul’s Drag Race UK.

Oh, thank you, my darling. It was a rollercoaster, but we got there in the end. (Laughs)

What has been the coolest thing that’s happened to you since you were on Drag Race UK?

You know, I went into the show with no real expectations of what was to come afterwards, so everything that came was so fresh and so exciting. I think I just didn’t know how big it was going to be. So every gig that came in, every opportunity to travel…I’ve been able to go to Amsterdam, and travel – and being flown to the US for DragCon was insane. I’m very grateful for all of the opportunities that have come post-show.

Do you have any regrets about your time on the show?

Oh, no. I’m very much a person who feels the show is a screenshot of your life at one moment in time. It’s very easy to say, “I wish I could do this, I wish I could do that” because there’s been so much growth since we filmed and my approach to drag has grown. So, while there’s nothing I would truly change, I just wish I could “zhuzh up” some of my runways, if you will.

What was your favorite challenge?

Now, I get asked this a lot and it’s a very hard question for me to pinpoint, so I always say I have two favorite challenges. One was the girl groups, because you know I love girl groups and I don’t shut up about it. I just got to live my fantasy which was coming alive on stage and lip syncing and dancing the house down boots. The second one, even though it was my demise, I have to say leaving on such a high doing the makeover challenge with my sister was one of my best moments on the show.

Let’s talk about your new podcast. What was the inspiration for it?

Podcasts have always been a passion of mine. I love sticking one on when I’ve got a long drive to do because, before Drag Race, I used to drive to all of my gigs – whether it was in Cambridge or in London – so I’d have at least an hour drive. I’d stick a podcast on and I’d feel like I was in the car with two other people having a conversation – even though I wasn’t chatting back.

It was one of those things that I always wanted to do, and it wasn’t until we were locked inside of our houses, going “What can I do? How can I be productive using this time?” because it’s very hard to focus on a project when you’re going from city to city and you’re turning up at a hotel and then having two hours to get ready. I’m like, “I can’t record a podcast.” So, I was like, “let’s use this time” but I was also like, “What can my podcast be about?” And, obviously, I chose my specialty subject, girl groups.

Who are your favorite girl groups, aside from Girls Aloud of course?

I have a very diverse taste in girl groups. I love all of my British girl groups like the Sugababes and The Saturdays. Obviously, worldwide, the Spice Girls I loved and adored. I also have such a passion for girl groups from years ago, like, I love the Pointer Sisters, I love The Supremes, I love Exposé, I love all of them. It’s one of those things that a girl group always has a very relatable thing about them that everyone can latch onto love and adore – whether it’s the music or the fashion or the concerts. We all just love their work.

If you could put together your dream girl group, who would you pick to be in it?

Oh my God, that’s a good question. I would obviously have myself because I think that I would be very fun, Kelly (Rowland) from Destiny’s Child, she would be fab. You’d want Victoria (Beckham) from the Spice Girls to bring the looks, the fashion, and the points and stares at the crowd. And you’d want someone very high energy, so I would definitely want Jade (Thirlwall) from Little Mix because she’d bring the party and get the crowd amped up. And then you need someone with killer vocals, so I would go with Nadine (Coyle) from Girls Aloud. I think that’s a very good lineup.

Who is on your bucket guest list for the podcast?

I said from the get-go, each week I would love a co-host with me who has a passion for girl groups, but more importantly, is one of my good Judys. I’ve got quite a few special co-hosts that are very near and dear to my heart and some of them are very popular and very well-liked in the drag world, so it’s going to be very exciting. But, my goal with this podcast is to have as many people as possible that have worked with or have been in the bands. For example, I would love to do an episode with Destiny’s Child and potentially get one of the girls – but if I have to get LaTavia (Roberson) or Farrah (Franklin) that’s absolutely fine with me! (Laughs)

Do you have any aspirations to record something of your own?

When did you know you wanted to do drag?

I’ve always been involved in drag from a very young age, because it’s one of those things that’s involved in pantomime, it’s involved with Lily Savage on your Saturday night TV and Dame Edna Everage. It’s always been incorporated in my world, but I never thought it was something that I could actually do, and it wasn’t until I watched the earlier seasons of RuPaul’s Drag Race and thought, “actually, this is a very contemporary take on drag” and I thought “this is something I could really do.” I was really exploring it during my university years and drag was really influencing my work that I was creating. I specialized in dance and choreography at university, so the movement of queens and whatnot was inspiring everything I was doing. I graduated and then lo and behold, I just fell into it.

Who has had the biggest influence on you?

I have to say, and this is why I’m doing the podcast, I have to say that girl groups have been such an influence for my entire life. A lot of my influences in terms of costuming and my performance and my visual aesthetic comes from girl groups from the Spice Girls to Girls Aloud and The Saturdays. They influence key points in my life and in my performance career that have always stuck with me. And then, of course, Miss Lady Gaga has inspired a lot of my work. (Laughs)

Who would your fans be surprised to hear you are a fan of?

I think people would be surprised to realize that I’m a big fan of classical music. I don’t listen to it on the regular, but I’m a big fan of classical music because when I was doing my dance training, that was all we used for technique classes. That’s been a part of my dance career which has influenced me. And I love when pop artists use classical music within their work to create drama, to create atmosphere, I mean Gaga has an entire body of work based around these classical interludes with her new album and I just think it’s absolutely genius.

What is your dream lip-sync song?

Oh my Christ. (Laughs) There are a few, but if I had to pick my dream lip-sync song, I think it honestly would have to be…oh, this is a tough one! You know what I think would go down in history? I think “Love on Top” by Beyoncé because I think seeing the queens lip-sync every time that key changes, every time it kicks in, I think it would be electric. It’s my end of night song.

What is the best piece of advice you’ve been given?

There’s two that have stuck with me for very different reasons. My first piece of advice was when I had just started my job at TGIFridays. I spent my entire university life at TGIFridays in between dance classes. The mozzarella sticks did not help the waistline (laughs.) They said to me on my first day of training, “To be early is to be on time, to be on time is to be late, and to be late is completely unacceptable.” That’s always stuck with me and I’m always the one who’s ready for the gig, I’m always early for a pickup. That’s one thing that’s stuck with me. The other is advice that Sasha Velour gave me before Drag Race was announced. She said, “Always go beyond what they’re asking and achieve more than their expectations.”

I’m so grateful for all of the support I’ve been given my entire life – from my family to the fans who are behind me, this little mediocre queen from Essex. Whether it’s one person showing me love or a thousand people showing me love, I’m just so grateful that people get behind me, support my craft and support the work that I want to put out to the world – and to truly make this world such a positive place. Because I think in the world we’re living in and how crazy it is, I think everyone needs to have a positive outlook on life and try their best to erase the negativity.