Constance Wu found herself in hot water after she negatively reacted to her show, Fresh Off the Boat, getting renewed.

Back in May, she tweeted out her frustration after learning about the ABC sitcom being renewed for a sixth season.

Fans quickly called her out for her ungratefulness and poor attitude; she said those comments were taken out of context.

Wu was happy about having a job (she plays Jessica Huang) but disappointed because filming another season meant she had to lose out on a role she’d been chasing.

“I had this moment of heat where I got upset because I had to give up a job I had been looking forward to and had been chasing for a while,” Constance said.

The 37-year-old star told The Los Angeles Times in an interview on Thursday that even though it was a chaotic time for her, her family at ABC stood by her side.

“It was moving to me how many people from the show reached out to me, and even on set … to say, ‘Just so you know, we love you and we know who you are, and you didn’t deserve any of that stuff,'” Wu said. “Because they also know that I’m an actress — I can be dramatic.’ 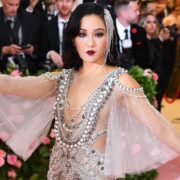 ABC’s adorable Fresh Off the Boat was renewed for a sixth season and that is normally amazing news for the cast and crew of the show.

She added: “I’m dramatic. I’m emotional. But they also know that that doesn’t represent me because they have a hundred episodes of behavior that proves otherwise.”

Constance also added that the whole thing helped improve her awareness of what it means to be a public figure, saying: “I’ve had a back and forth about it. It’s the line between being a role model, but also authenticity.

“There is an expectation of the way that I ought to behave, and not just of perfection but of graciousness,” she added.

“And I am grateful. But am I elegant? No. I think I can be verbally eloquent sometimes, but as a human, am I an elegant person? No.”