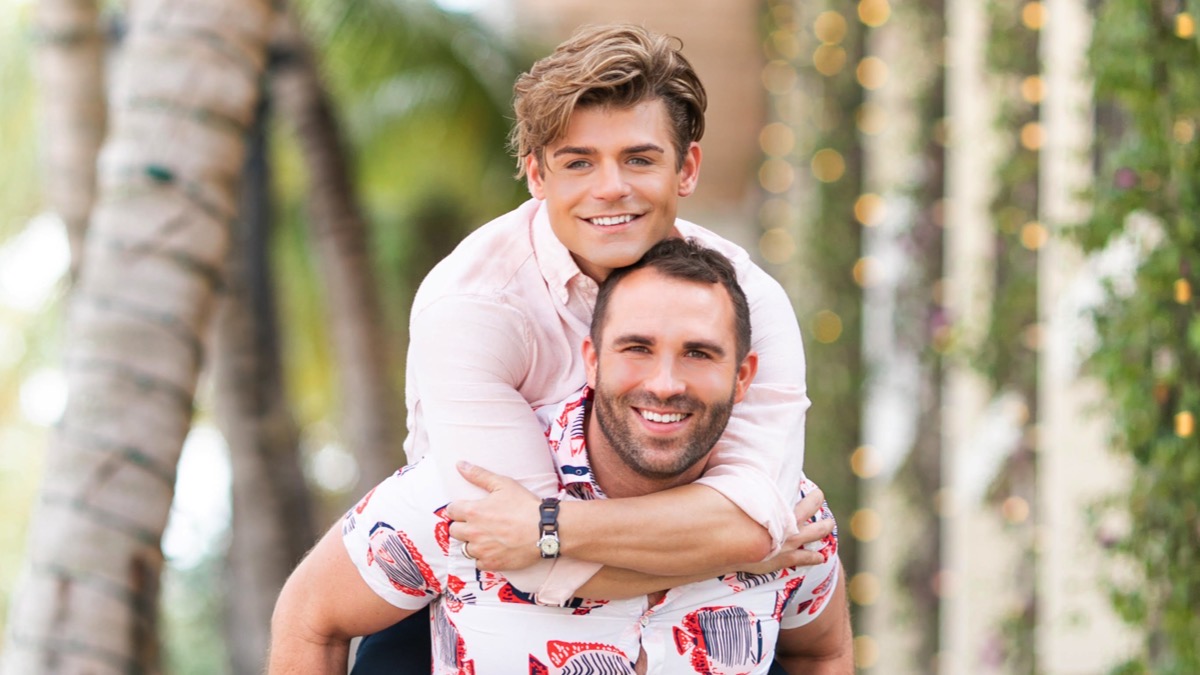 See a Very, Very Dirty Jason Momoa Getting Hosed Down

Actor/singer Garrett Clayton (who you may remember from Teen Beach Movie and King Cobra) and his fiancé, writer and educator Blake Knight have created a new YouTube channel called A Gay in the Life.

On the channel, the pair interview LGBTQ+ people around the globe to educate and inform their audience on what it is like to be an LGBTQ+ person in 2020 here in the US and all around the world.

In addition, they share a behind-the-scenes look at their relationship and personal life with occasional “date night” videos, talk about their wedding plans and other surprises.

Among the interviewees for the new channel are Tan France from Queer Eye and Jackie Cox from RuPaul’s Drag Race. International guests include gay Russian man who sought asylum in the U.S., a trans woman from the Philippines, a gay politician from Brazil, and a Native American Two Spirit individual.

They talk to Garrett and Blake about how their cultures and traditions have impacted their coming out journeys. Discussions include thought-provoking takes on love, dating, sexuality, gender, LGBTQ+ rights, and more.

Garrett and Blake will also be speaking to LGBTQ+ people from China, Thailand, Samoa (a third-gender fa’afafine individual), Sudan, and Spain in the coming weeks, and will be doing two episodes with two Black Americans about their experiences growing up LGBTQ (i.e., the prejudices they faced both at home and within the LGBTQ community).

They hope that by sharing these stories they will provide people with insight into the many issues LGBTQ people face across the world, and also show them how we really aren’t so different after all, no matter where we’re from or who we love.

Garrett and Blake talked with us about the new series and lots more as they answered the Socialite Seven. Get to know more about these inspirational individuals (and meet their canine kids!)

What inspired you to create “A Gay in the Life?”

When we first thought about making a YouTube channel, we wanted to make something that we thought could help people in some way. Since I’ve [Garrett] come out, I’ve received tons of messages online – from young people in particular – about how me coming out has helped them in some way. Many of them said that they were happy to see another gay person being open and honest, and many others said that it gave them the strength to come out themselves. That’s pretty powerful. So, I wanted to utilize the audience I had to be able to educate and inform people about the LGBTQ+ community as much as I could. A Gay in the Life is the mechanism for that.

What are you hoping to achieve with A Gay in the Life?

Right now, we’re hoping to give some insight as to what it’s like to been queer in places all over the world–and to bring to light different issues that these people are up against. By interviewing LGBTQ+ individuals from all walks of life and all sorts of cultures, we really do get to a lot of meaty topics that people otherwise may never hear or think about. It’s been really eye-opening for us so far, too! What it really boils down to is that we want to help normalize queer relationships and visibility as much as we can, and we’ll also be providing information about lots of resources for LGBTQ+ youth.

Uhhh, I hopefully have a lot more life to live before writing an autobiography, but, “A Gay in the Life,” of course! Haha!

What talent would you like to wake up with tomorrow?

Garrett: I would do unspeakable things to be an all-around musical savant. I think it’s pretty awesome when you come across a person who can play guitar and piano really well. I’ve tried to play guitar a few times, but it would be awesome to wake up and be a pro at instruments in general!

Blake: I’ve always wanted to be a polymath, to be able to master a dozen or so languages. I took Spanish in high school, and Italian for three years in college, but I haven’t kept up with either. But that would definitely come in handy when traveling, and I think you learn so much about a culture when you study their language and the way that they communicate.

What have you been bingeing lately?

Garrett: Oh man. Especially these last few months we’ve binged so many shows! I binged Cursed by myself, and we’re both in the middle of watching Into the Dark together. It’s pretty good.

Blake: We also really loved Love on the Spectrum! It was so damn cute. Check it out!

I think “Never be the smartest person in the room” is a pretty good bit of advice. If you surround yourself by friends and family who you can learn from, you’ll never stop growing. That’s one of the reasons we’re talking to queer people from all over the world. Everyone has a different point of view on what it’s like to be LGBTQ+. And we can all learn from their experiences.

See a Very, Very Dirty Jason Momoa Getting Hosed Down