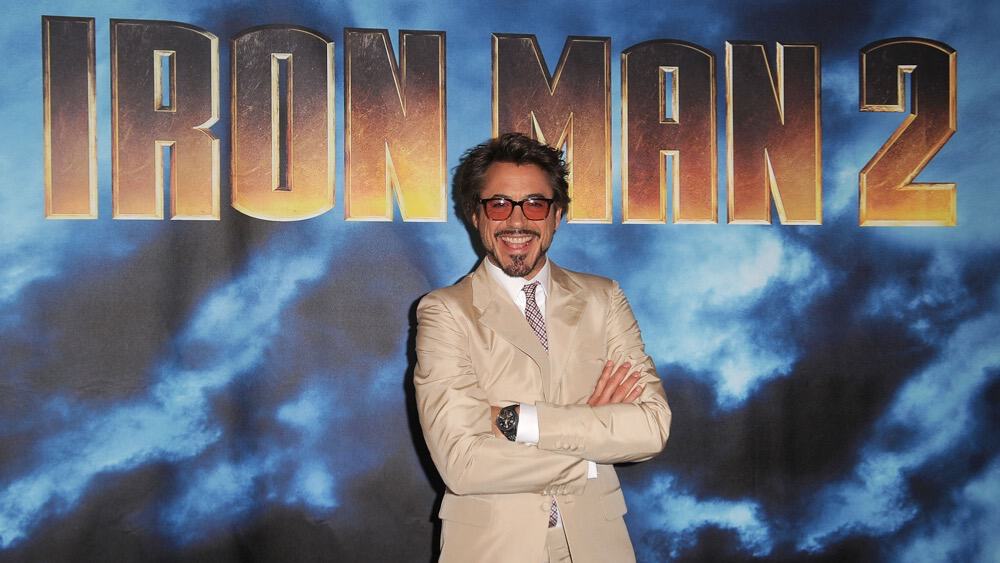 And people say there is a focus on women’s bodies in Hollywood!

Robert Downey Jr. had to go through an arduous training process to bulk his post-Sherlock Holmes scrawny bod back up to Iron Man 2 standards, shooting up to 175 pounds!

Here’s a peek into his grueling schedule, as planned for him by his trainer Brad Bose, working out at least 3 days a week.

Instead of doing regular bench presses, Downey used a bamboo bar. His trainer would hang plates on rubber bands off the bar “so it was like trying to bench press a snake!” Bose said.

Downey Jr. also was provided with “a custom-built wheelbarrow that we modified with 600 to 700 lb. weight stacks” that he had to move around an obstacle course.

Beat tires with 4-20 lb sledgehammers (whaa?) plus fire hoses filled with sand and water. Weeeird. “We’d drag and whip them to build the shoulder muscles and pecs back up,” the trainer said.

On top of all that, Downey, pictured with his wife in Malibu on May 1, is a die-hard advocate of Win Chun, a kind of martial arts. Hey if you’re not complaining about the muscles, neither am I!

Socialite Life debuted back in 2003. SL Flashback showcases some of our favorite content from years past. This article was originally published on May 6, 2010.

Chris Pratt’s Avengers Castmates Request You Not Cancel Him