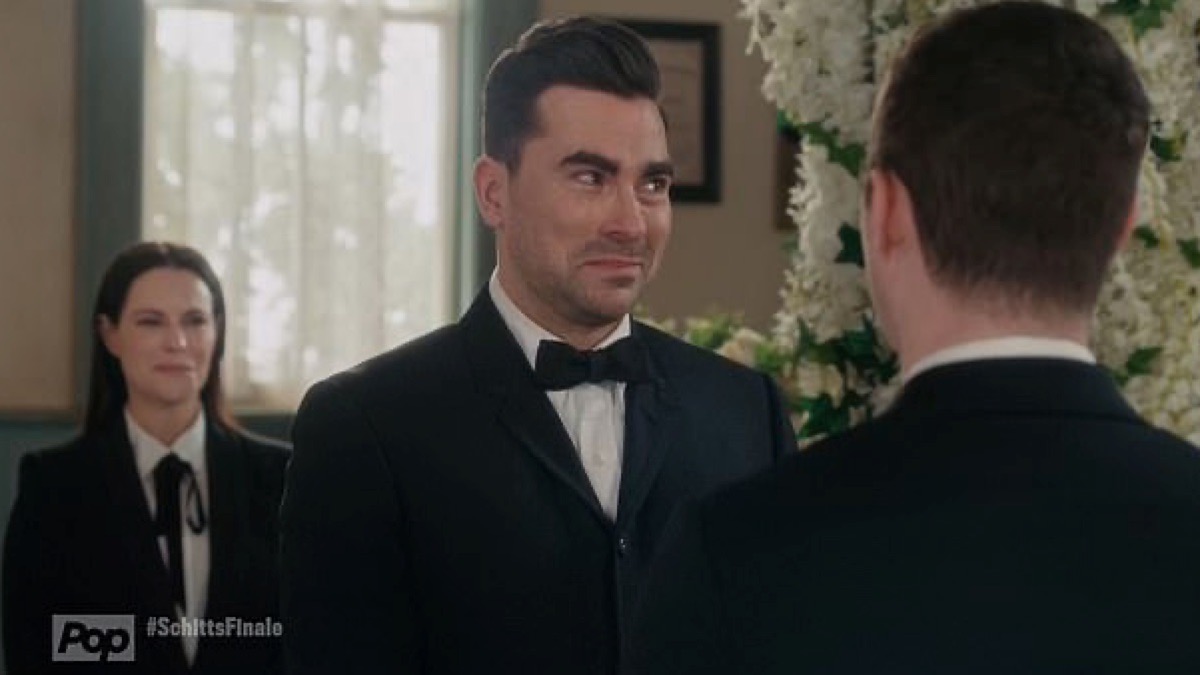 After six delightfully hilarious and emotional seasons, Schitt’s Creek came to an end with one of the most perfect series finales ever.

No spoiler’s here, just an appreciation for how amazing the show was. You can read a recap of the episode here.

Co-created by father-son duo Eugene and Dan Levy, the show portrays the ups and downs of readjusting to unforeseen life circumstances and how we have to adapt to the changes around us.

Over the past six seasons we’ve witnessed the family’s unforgettable members, Alexis, David, Johnny and Moira, navigate their new normal after losing nearly everything to a financial planner-turned-embezzler.

From Moira’s venture into local politics to Johnny’s entrepreneurial endeavor with the town’s motel, we have followed along closely as caricatures of former wealth and privilege evolved into the three-dimensional characters we now welcome onto our screens every week.

Levy, who starred in the show as David Rose opposite dad Eugene Levy, shared a picture on Instagram of him crying on his last day filming in the Rosebud Motel room.

“Tears are a good thing. It means you care,” Dan Levy wrote. “This show has been the love of my life for the past seven years. Getting to tell these stories, build these characters, and watch them grow has been a privilege for which I will always be grateful.

We built a family on those sets and it’s reassuring to know that time won’t ever change that. I love you guys more than you will ever know.”

Levy said about ending the show, “It was important for me that this show remains something that people cherish and that people go back to and revisit year after year or put on when they’re feeling blue,” Levy said. “And in order to do that, you really need to be aware of when is the right time to say goodbye.”

It might be the right time, but it was still an emotional roller-coaster for the Schitt’s Creek cast, which includes its other creator, veteran actor Eugene Levy, and Catherine O’Hara, who was wearing her character Moira Rose’s heavy mascara and eyeliner during the show’s final table reads.

She said she cried so much “our makeup artist was calling me Alice Cooper.”

“That last table read of the last two episodes was killer,” said O’Hara, whose character is an outrageously accented, wacky wig-wearing former soap star who can’t wait to ditch the town of Schitt’s Creek.

Levy purposefully chose to avoid stereotypes and portray a small, rural town as comfortable with all sexuality (Levy’s character has had relationships with with both a woman and a man during the show, with not a single eyebrow raised).

“To show bigotry and homophobia only emboldens people who have those beliefs,” he said. “It was an unintentional message. But I guess in removing the negativity from the town, the message was just that: Look at the world without hatred and see how much better it is. That was really the goal.”

One to Watch: Singer Gabi Sklar Answers the Socialite Seven