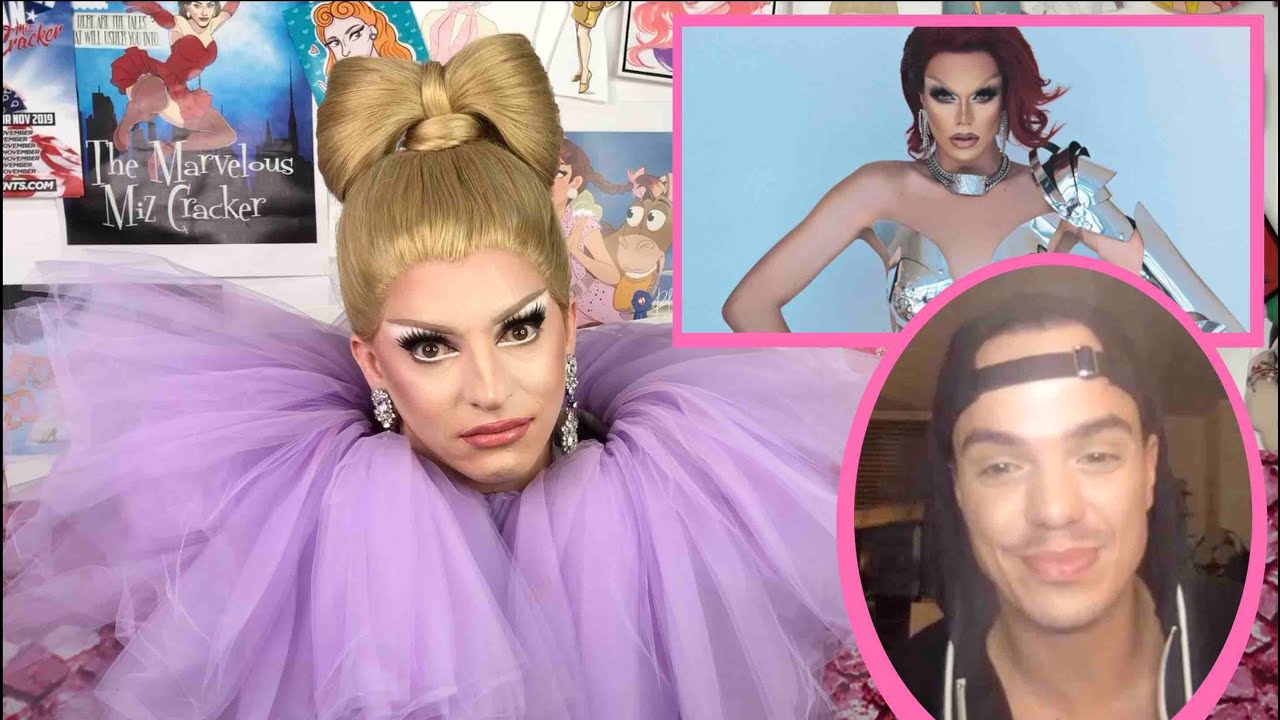 Hello, hello, hello! We finally made it to April so, a celebration is in order. Fortunately, the queens have been bringing us lots of new content to keep us entertained while we’re stuck at home.

As always, some of your favorite RuPaul’s Drag Race alums weigh in on the “Gay’s Anatomy” episode and the caped runway and we’ve got interviews with the queen who had to sashay away.

We also have new music from Widow Von’Du, makeover tutorials from Nicky Doll, and Trixie Mattel and wig wizardry from Jaymes Mansfield. Let’s bring it to the runway!

There was a lot of fashion on the “Planet of the Capes” runway and Bob the Drag Queen and Yuhua Hamasaki review the fashions on “The Pit Stop.” Yuhua also shares who she thought had the cape challenge wrapped up and who got it tangled in her own series, “Bootleg Opinions.”

Speaking of fashion, our resident fashion experts, Raven and Raja are back, tooting and booting the caped fashions from the runway on “Fashion Photo Ruview.” Raven really didn’t like one queen’s look (in my favorite moment) and I am loving Raja’s silver hair. I think I’m just going to let my roots keep growing out and adopt this as my “quarantine hairdo.”

Jaymes Mansfield, giving us her own interpretation of “Gay’s Anatomy” in her very own Clinique lab coat, discusses the episode (as she remembers it) and gives us all a little her-story lesson about the great Mae West on “Not Another RuPaul’s Drag Race Recap.”

Miz Cracker welcomes eliminated queen Nicky Doll, who discusses her elimination and what’s next for her (hint: it’s music) and recaps episode 5 on “Review with a Jew.”

The lovely Shuga Cain takes us on a box wine-fueled trip through episode 4’s beehive jive and Ball Ball in her most recent installment of “Shuga in the Raw.”

Of all of the recaps I watch, I am always excited to see what the unique Nina Bo’Nina Brown is wearing for her “Rawview.” As she talks about “Gay’s” and capes, she’s serving her take on Meryl Streep in Death Becomes Her. She is so creative – and I love her unfiltered take on the show.

Our beautiful baguette, Nicky Doll chats with Michelle Visage about her experience on the show and shows us fashions we (sadly) won’t see on the mainstage – including an amazing “Ver-sayce” look that would gag Nomi Malone herself – on “Whatcha Packin.’”

Nicky shows how she achieved her beautiful runway makeup in this tutorial. Ooh, that cat eye game is on point.

Widow Von’Du has a new single out. Check out “Yes Bitch! She Might Be” and the space-themed video featuring looks and fashions straight from the Drag Race runway.

RuPaul’s favorite El DeBarge look-alike, Crystal Methyd, gifted us with not one, but two fantastic videos this week. In the first, she shows us how she created her signature makeup look from the “buttons and bows” mainstage in this tutorial. Those contacts are everything. She also dropped a tutorial showing how she transformed herself into a Paris Hilton-inspired “natural woman.”

A fantastic documentary about the word of drag dropped this week. In director Ollie Tunmore’s Drag: Around the Clock, performers from around the world talk about their artistry and share their experiences working in the drag scene. With interviews conducted at DragCon UK, the director shares insights from more than 20 RuPaul’s Drag Racequeens, including The Vivienne, Bob the Drag Queen, Monét X Change, Trinity the Tuck, Blu Hydrangea, Vinegar Strokes, Cheryl Hole, Jujubee and Shea Coulee. Ollie tells World of Wonder that, “This project has been a real labour of love, and I am immensely proud of it. It truly is a reflection of drag, around the clock, too. I interviewed people at 1am above a club, had 21-hour days starting at 4 am filming at DragCon, basically I worked on it however and whenever I could!”

Willam is back with another “Beatdown,” and this time he gets read by the “Old Gays” (the video, “Old Gays React to RuPaul’s Drag Race” is so cute. I would love to hang out with these fellas. He also takes on a cruise ship mishap and a performance by his “Race Chaser” co-star Alaska’s drag daughter, Nebraska.

The Vivienne and Baga Chipz taking on Netflix’s Love is Blind is the video I didn’t know I needed in my life. Watch the pair react to the talked-about series (and serve up so much UK slang) on ”I Like to Watch.”

I’m not going to say I am old, but I remember working out to Cher’s workout tapes on VHS. Since my gym is closed (as I am sure yours are too) why not go back to the 90s and workout with the diva as Nina Bo’Nina Brown joins in for some hot dance. I can think of no better way to work up a sweat.

Alyssa Edwards dishes on being single on the latest “Alyssa’s Secret.” She shares her “do’s and don’ts” of being single and offers encouraging words for all of you independent folks out there.

Trixie Mattel joins Tom Lenk (from Buffy the Vampire Slayer and a hilarious Instagram account), as they recreate celebrity looks with things found around the house. In this makeover, they craft garbage bags and other miscellaneous supplies and transform into the Olsen Twins.

Trixie shares with GQ 10 things she can’t live without. Her essentials include a gaming system and the same hairspray my partner uses! She also shares her obsession with Red Bull as well as her signature scent. And, of course, there’s a Barbie reference – would it be a Trixie video without one?

Trixie and Katya are here to give you advice on their new WOW Presents Plus show #WOWHelpMe. Here they share advice on how to break up with tact, how to ask someone their name after you’ve forgotten it and tips on saving a few bucks.

Monét X Change’s BUILD series “The X Change Rate” is still here to entertain you as you’re cooped up and on the latest episode, Monet chats with Nicky Doll and the wonderful Taraji P. Henson. Empire is one of my guilty pleasures and Taraji’s Cookie is the reason why. I love this woman and she gives great interview (and looks amazing while doing so.) I hope Taraji’s dream of being a judge on Drag Race comes true, because she was made for the judges’ panel.

Miss Coco Peru has been sharing stories from isolation in her “Thoughts While in Solitude” series and, in the eleventh episode, she talks about her friendship with her idol, Bea Arthur. Would anyone else just want to sit and talk with Coco for hours and hours?

Season 6 champion Bianca Del Rio chats with Patrick George “Decent Exposure.” Bianca discusses her season of RuPaul’s Drag Race, recalls her first time in drag and reveals how being on the show has changed her life. She also shares what she would do if she had her own TV show (and idea I am 100% behind) and does a mean Lady Bunny impersonation. She may have a reputation as an insult queen, but she is absolutely charming. Do yourself a favor and check it out…it’s not like you have anything else to do.

Our OG “America’s Next Drag Superstar”, Bebe Zahara Benet, released a video for her new song, “Banjo” on Thursday.  The song is smooth and the video, which features appearances by Pit Crew member Jason Carter, Daniel Franzese and Jai Rodriguez is just the thing to cure the quarantine blues.

Our favorite wig wizard, Jaymes Mansfield, is keeping busy and cranking out content. This week, she’s feeling nostalgic while in isolation and looks back at her first wig tutorial from 4 years ago. She also transforms a long pink glow-in-the-dark wig from Leg Avenue into a beautiful bow look.

Love Connie once again takes the Pit Crew through another workout, this time recreating the “Whatcha Packin’?” challenge, as they have to undress, run around a cone and get dressed again, all while being sprayed with water. If you ever wanted to know what the fellas looked like with pants on, this is the video for you.

Now, if you’ve watched all of these videos and are still craving con tent from your favorite queens, why not enjoy a live performance from your living room? The Digital Dragfest is going on now, featuring 30-minute live, streaming shows from some of your favorites. Among the Drag Race alums performing are Alaska, Alexis Michelle, BenDeLaCreme, Divina De Campo, Ginger Minj, Jackie Beat, Jiggly Caliente, Jinkx Monsoon, Jujubee, Manila Luzon, Miz Cracker, Monét X Change, Mrs. Kasha Davis, Nina West, Peppermint, Sharon Needles, Sherry Vine, Tammie Brown and Trinity The Tuck. If you want to hang virtually with yours truly, I will be watching my favorite queen, Pandora Boxx on April 12 (join me!) Details and tickets are available on Stageit.com.

Whew! That was a lot, and, with our quarantined queens, there’s sure to be lots more recaps, videos and music to come. Stay safe and healthy and, until next week, everybody say LOVE!