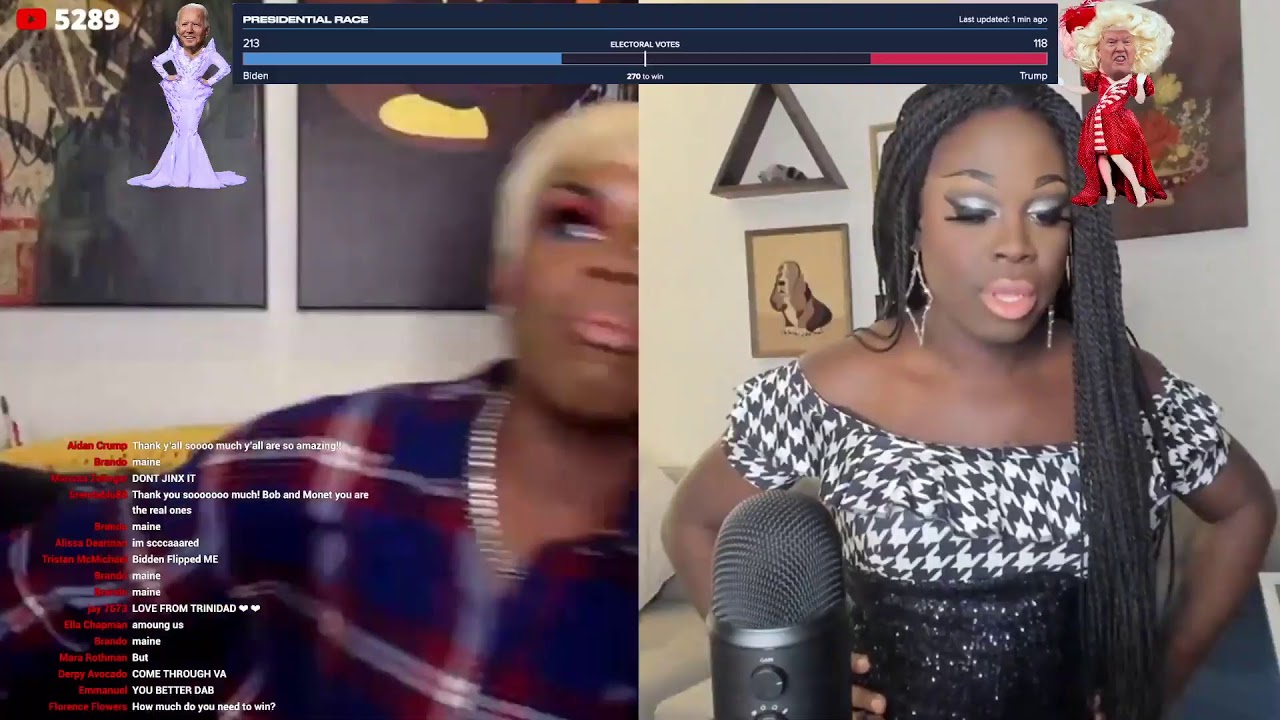 Hello, hello, hello! It’s been quite a week, hasn’t it? Between the last remnants of Halloween and the truly scariest moments we’ve experienced this year, you deserve a break and the queens are here to deliver.

In the latest edition of The Week in Drag, we’ve got some important political discussions that you need to hear as we try to foster a spirit of understanding and tolerance in these turbulent times. And, if you just want a laugh or some fierce fashions and content to bring a smile to your face, we’ve got that as well. Let’s bring it to the runway!

We all assumed Election 2020 would be a multi-day event, but instead of the usual election night coverage, I opted to spend the evening with Bob the Drag Queen and Monét X Change as they delivered an entertaining live stream.

As I mentioned, sometimes it’s important to give a platform to those you may not agree with, as understanding is often overlooked in today’s world. Bob took some time to listen to a black, gay Trump supporter and take part in some meaningful conversation on “Only Child.”

Another prominent activist, Peppermint, used her platform to get to know what makes a pair of gay Trump supporters tick. Their conversation is definitely worth a listen, regardless of whose side you are on.

Politics are always scary, but so is Halloween, and we have a few trick or treat leftovers for you. Last week, we were treated to a special on World of Wonder’s YouTube channel. On Bring Back My Ghouls, the radiant Jaida Essence Hall checks in with her fellow season 12 queens, who have some holiday-inspired tricks up their sleeves. Jan gave us a little ASMR, Gigi carved a pumpkin, looking like a Tippi Hedren Birds fantasy. Widow served us some spider realness as she performed Ru’s “Sissy That Walk”, Nicky Doll baked a pie and Jaida hosts a creepy “Snatch Game” with Rock M Sakura’s Pennywise, Crystal Methyd’s Freddy Kreuger and Jackie Cox’s Bride of Frankenstein. Since many of us didn’t get to see The Great Pumpkin this year, this is a fun alternative for sure.

Trixie Mattel and Katya also stayed in the spirit of the spooky season and are back with more scary movie suggestions for you. Trixie serves feline glam and Katya (in a Twin Peaks shirt I must own) as they recommend some Netflix movies that you should add to your queue. The queens watch Killer Clowns from Outer Space, Eli, Would You Rather, Session 9 and Girls with Balls on the latest installment of “I Like to Watch.”

Also this week, Trixie introduced some new and restocked Trixie Cosmetic products and accessories. If you’re a fan of her lip gloss, OG shades Mellow Drama, Cream Puff, and Snow Cone Glosses and a new pink, Pink Slip, are now available Friday at merchmother.com. She also shows off a new Accessories Pack, that includes an enamel lipstick pin, 2 patches, and 4 stickers and an adorable Trixie Cosmetics Beret. Not only are the products fab, but Trixie is such a fun spokesperson.

On the latest episode of “UNHhhh”, the topic is fighting. Listen as Trixie recounts a carjacking, the two discuss if they could kill someone (and how they would do it), Katya schools us on karate punches and how to be non-confrontational. They also discuss post-fight makeup sex, parenting styles and which Drag Race queens would win a fight.

It’s been a busy week for Bob the Drag Queen. He was the subject of an in-depth interview by Grace Helbig on “Not Too Deep.” Even if you know everything about Bob, hearing her talk just never gets old.

In her ongoing effort to become a YouTube queen, Bob has a fun new challenge video where she attempts to construct a dress in 8 minutes. Can she pull it off? Watch and see.

Lastly, our self-confessed non-makeup artist teams up with Willam for the latest “Paint Me Bitch.” Using a Kennedy Davenport creation that they both had their eye on, Bob creates a fierce look to accompany the dramatic garment (and it really works.)

If there are two things I love, it’s season 12’s Miss Congeniality, Heidi N Closet and chicken wings. Imagine my delight when Heidi devoted the most recent episode of her “Gap Chat” series to the delicious treat. Don’t watch this one on an empty stomach.

After wings, how about some dessert? On “Kitch’N Queen” Monét X Change learns how to bake a sponge cake, with a little help from her friend Jacklynn Hyde.

Atlanta queen Trinity K Bonet is back with another fashion reaction video, this week doling out heels and flats to another Trinity, the amazing Trinity the Tuck, ranking her runway looks from season 6 and All-Stars 4.

Jaymes Mansfield, in a wig she describes as “hideous” and something Marcy Darcy from Married With Children would wear, transforms a Halloween-themed blue Bellami wig into 70s/80s country Music Awards hair. I kinda dig it.

Lady Bunny and Bianca Del Rio are teaming up to bring you the news the way you’ve never seen it before. HHN: Hateful Hags Network sees Bianca and Bunny anchoring a newsroom where the only headlines are insults and dirty jokes, with extra gags, costume changes, and a musical number by a surprise guest in the mix as well. HHN: Hateful Hags Network Premiering Thursday, November 12 at 8 p.m. on Vimeo, and tickets are available on Vimeo here.

Well, that’s all for this week! Until we meet again, stay safe, stay healthy and say LOVE!