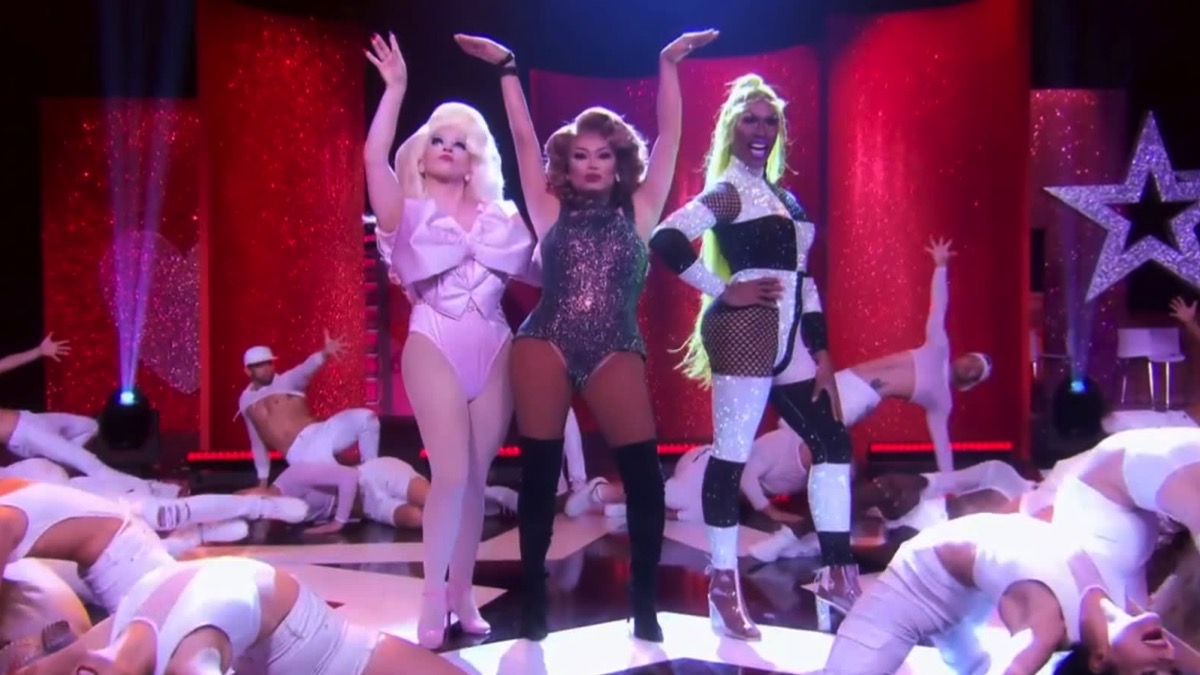 Hello, hello, hello! We’re back with the latest news and updates from the queens of RuPaul’s Drag Race.

This week, we welcomed a new All-Star into the Hall of Fame (congrats, Shea Couleé!) and got big news about a new RuPaul show coming to a TV near you.

We’ve got recaps from the stand-up smackdown episode of All-Stars 5 from some of your favorite Ru-cappers and interviews with the top 4 as they talk fashion and All-Stars with Michelle Visage.

We also have new tutorials and fun videos from WIllam, Trixie Mattel, Honey Davenport and more. There’s a lot to cover, so let’s bring it to the runway!

Of course, the big news is the announcement of a new show to fill the All-Stars-shaped hole in your hearts. VH1 is bringing you a six-episode series, RuPaul’s Drag Race: Vegas Revue, which premieres on Friday, August 21.

The new series gives us a behind the scenes look at the queens who headed off to Sin City for the RuPaul’s Drag Race Live! residency. The cast includes season 11 winner Yvie Oddly, as well as Asia O’Hara, Derrick Barry, Kameron Michaels, Naomi Smalls and Vanessa Vanjie Mateo.

In addition to watching the show come together, there’s also sure to be some drama, like the smooch between Vanjie and Kameron that we see in the teaser. I missed out on my chance to see the Vegas show (I fully blame Miss ‘Rona), so I am excited to tune in to this series.

Bob the Drag Queen brought out the big guns for this week’s “The Pit Stop”, inviting his “Sibling Rivalry” co-star and BFF Monét X Change to discuss the penultimate episode of the All-Stars season.

Next to the staaaage, it’s Raja and Raven, tooting and booting the freaky fashions from the runway on “Fashion Photo Ruview.”

If Nina Bo’Nina Brown took part in the ‘Freak Out” runway, you know she’d win. Our favorite creative queen is serving us an African princess fantasy that you’ve gotta see to believe on this week’s episode of her no-holds-barred “Rawview.”

If you can’t get enough of Nina’s look, you can see more as she joins Yuhua Hamasaki for the latest episode of “Bootleg Opinions.”

We all stand up for the stunning Kimora Blac, and she’s back to share her thoughts on the challenge and runway fashions.

Top 4 All-Star Blair St. Clair has her “exit interview” with Michelle Visage on “Whatcha Packin’?” She talks about her astrological sign (a Taurus, just like me), her life before Drag Race as a hairdresser and wig stylist in the theater and her season 10 “theater queen” persona. She also talks about her Snatch Game portrayal of Ellen DeGeneres and shares the story behind some of her fashions, including her stunning red prom look gorgeous Mondo Guerra creation that didn’t make it to the runway.

We were also treated to the top three on “Whatcha Packin’?” this week. Miz Cracker talks about living in her head, her losses in life and how she dealt with that while competing on the show. She also shares how she overcomes self-doubt and stage fright. Among her fashions, she discusses her iconic pickle outfit and a Katya-inspired look for a potential makeover (as Trixie and Katya) and answers the burning question of why queens keep doing Gaga on Snatch Game.

Jujubee compares her experiences on the many seasons she’s been a part of and talks about being a role model for queer Asians. She talks about being in the top for all of her seasons and how she does it. As for All-Stars, she sheds light on her favorite challenge, lip-syncing against Monét X Change and her knack for “pot-stirring.” We also get to see some of her runway fashions including her prom look, her freak look and her “love the skin you’re in” mermaid gown that she dyed herself.

Shea Couleé reveals why she said no to season 4, talks about her love for drag and making her dreams come true. Of course, she talks about her fabulous Flavor Flav impersonation for Snatch Game (she was in middle school when Flavor of Love aired originally. Sheesh, I am old.) She also shares what she’s going to do with her All-Stars winnings and shows off some of her back-up fashions (the yellow floral dress is absolutely beautiful and she also has a Mondo Guerra creation.)

The top three share their “Journey to the Crown” and reveal which of their competitors they have a crush on, share their favorite challenges, their regrets and discuss why they deserve the crown.

Want more from the Top 3? Well, I am here to make that happen. Check out this video where Juju, Cracker and Shea jump into the wayback machine and react to their very first Drag Race promo photo.

I don’t know about you, but the gag of the All-Stars finale was seeing season 4 winners Monét and Trinity paying tribute to Vida Boheme and Noxeema Jackson from To Wong Foo. The looks were part of a photoshoot for Entertainment Weekly and, in the accompanying interview, the dolls are asked about their greatest accomplishment during their reign. Trinity replied, “You have two [queer people] from a community that has so much adversity against it, and we’re celebrated. You have a black person and a white person shown as equals, which is how it should be. That’s a huge message to the world in spite of our government right now and in spite of these stupid racists. This show has shown true equality…. It means something to these kids watching the show!”

Asia O’Hara looks at the top 10 moments from the cast of All-Stars 5 in “10s Across the Board.”

Famed psychic Walter Mercado is back in the spotlight, first with Alexis Mateo’s tribute for her Snatch Game performance and then with the Netflix documentary, Mucho, Mucho Amor. If you haven’t seen it, I highly recommend you do – not only will it show you how good Alexis as in the challenge, it’s also a fascinating look at a pop culture icon in the Hispanic community. If not, Trixie Mattel and Katya watched it for you and provide an always hilarious synopsis of the doc in this episode of “I Like to Watch.”

If you can’t get enough of this hilarious duo, you’re in luck, because their web series “UNHhhh” is coming back for another season on WOW Presents Plus. The new episodes premiere on Wednesday, August 5 at 12pm PT / 3pm ET. Episodes will be available on World of Wonder’s YouTube channel a week after they air on WOW Presents Plus.

Trixie takes a walk down memory lane and reacts to her All-Stars 3 runway looks.

I’d love to say I have the best interviews of the queens, but Joseph Shepherd has got me beat. This week, on his amazing “Exposed” series, he sits down with the one and only Tammie Brown. She talks about her early days in drag, her favorite celebrity to perform and reveals the name she wanted to perform under. Tammie is such a unique entertainer and I can’t think of a better way to spend 60 minutes than listening to Tammie’s tales.

When I am down and need a good laugh, I always can turn to Willam. This week, she’s got a new “Beatdown,” taking on a cover of “Total Eclipse of the Heart” like none you have ever heard before, a lippy kindergartener, a drunk scooter operator and a bizarre way to work out.

Want more? Over at the “Homo Shopping Network”, you can witness Willam doing some unboxing with the enthusiasm of a kid on Christmas day. Check out her haul, including products from Kim Chi, Jaida Essence Hall and some of her own tees from Drag Queen Merch.

Willam took RuPaul’s Master Class, so you don’t have to. She share a sneak peek of what she learned (she’s definitely got the reading part of “reading, writing and arithmetic” down) and tune in to her Patreon to watch the whole series.

The amazing Keke Palmer (who just reminded me how much I miss Star) and Blair St. Clair are the guests on “The X Change Rate” with Monét X Change. Make sure to stick around for Monét’s oh-so-accurate rant about Zoom conferences.

Kim Chi and Naomi Smalls have collaborated on a fab new eyeshadow palette, called 2 Queens, 1 Desert. They show off the new shades and give each other makeovers – a first after 7 years of friendship. Along the way, they talk makeup mishaps, brunch traditions and the inspiration for the new collection. Kim with a nude look was not a mistake, I kind of love it.

Jaymes Mansfield got her hands on Trixie Cosmetics’ new Insider Collection (lucky) and tries out the new products in a very Trixie-inspired makeup tutorial.

Jaymes also gave us another wig makeover this week, taking some fan-sent hair (a bob wig and a topper) and creating a sky-high Alexis Mateo-inspired updo that would look great in any pageant.

Honey Davenport (looking amazing in a fabulous blond streaked wig) is back with another “Da Fuq?”, discussing random topics like penis fish, a $37M banking error and more with Paisley Fields (a country singer who is a touring member of pioneering queer country outfit, Lavender Country.)

This week, Honey shared an important message and has recruited some of her fellow queens to address the toxic elements of fandom. Along with Kahanna Montrese, Kennedy Davenport, Mayhem Miller, Rajah O’Hara, Yuhua Hamasaki, Detox, Gigi Goode, Laila McQueen, Milk, Miz Cracker, Nina West and Trinity The Tuck, Honey is working to spread love throughout the LGBTQ community and beyond.

She said, “As artists and performers, all we want to do is create; all we want to do is spread love. Unfortunately, the reality of our reality television experience is that the “fandom” of the show can be toxic at times. My sisters and myself have received countless letters of hate and death threats since our appearance on television. Listen and watch as a few of my POC sisters and I share our stories, alongside some of our allies who are also demanding that this treatment of queens who are not white ends now. I am forever grateful for the experience RPDR provided me and I remain a viewer and avid fan to this day. My hope though is that one day the fan base learns to treat me and ALL of my sisters, regardless of race, with the love and respect we all equally deserve.”

That’s all for this week! Until we meet again, stay safe, stay healthy, remember that Black Lives Matter, and love is love.