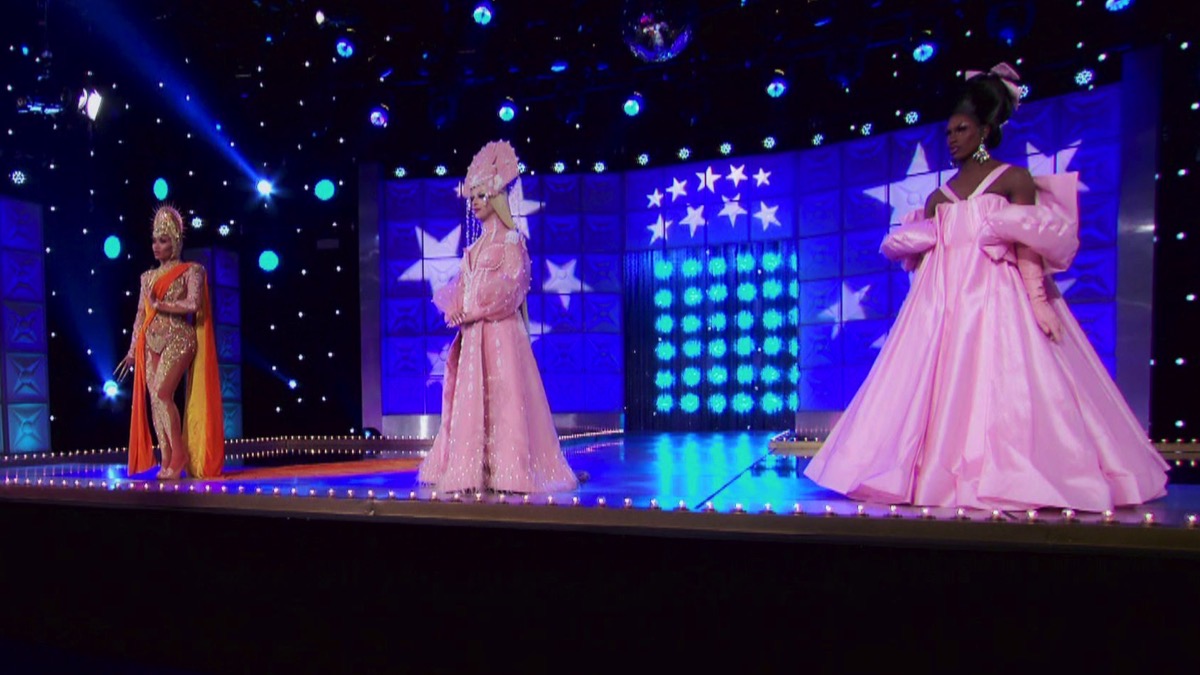 It’s time to crown the 6th All-Star, to join drag royalty Chad Michaels, Alaska, Trixie Mattel, Monét X Change and Trinity the Tuck. But first, our top three have to prove they’ve got what it takes to be the next RuPaul’s Drag Race All Stars champion.

In typical finale fashion, the queens all lend their voices and moves to a reboot of a new RuPaul tune (available on iTunes, of course) and we get the last chance to get to know them as they chat with Ru and Michelle on their “What’s the Tee?” podcast. Let’s take a look at the top moments from the episode.

The return of the queens

After the top three compare notes and get into an awkward pillow fight, we find out the purpose of Ru’s mysterious phone call last week. Yes, the eliminated queens are all back and after they sashay into the werk room, they hide behind a pink wall with a hole in the center. Huh?

It’s like production had a set-piece they didn’t use earlier in the season and figured, heck we can use it to obscure the queens. It makes no sense, but it does provide us with a laugh as Shea, upon seeing the “glory hole” notes that it was a nice gift for Ru to give the top three, joking that “she knows her daughters.” Juju quips that while a glory hole “in theory sounds really great” but “you can get presents you don’t really want. Like, ‘Surprise! You’ve got herpes!’ or, ‘Surprise! You’ve got to take a pink pill and a shot in the butt!’” (I am going to miss Juju.)

The eliminated queens eavesdrop on the top three as they discuss how they feel about their experiences on the show, which prompts Alexis to ask, “Do we all sound this fake?” Shea spots Ongina’s face through the hole and the queens emerge with hugs all around.

Ru greets all of the queens and says the top three will be challenged with write and record their own verse for Ru’s new song “Clap Back.” The queens will also work with Todrick Hall to create “the best production number in Drag Race herstory.”

Ru reveals that the eliminated queens were invited back because she “didn’t want anything left unsaid” and added that the dolls will serve as backup dancers for their final challenge. Ru also adds that, when it comes to the lip sync for your legacy, “the only lip-sync assassins will be the three of you.”

Sine Ru said he wanted nothing unsaid (and also because I don’t think there’s a reunion episode coming), the whole cast gets comfortable on the sofa and rehashes some of the conflicts and quibbles that have occurred over the course of the season. Derrick wants an apology from India for her online comments and gets one.

Ongina talks about nominating herself to go home and says she did it because she was “destroyed” after the reading challenge and lost her confidence, adding that she knew it was “the right thing” for her to do.

Mariah called out Mayhem for her self-elimination saying she could have stayed and was sad she gave herself up for India and not her. Alexis, spilling the “juiciest” tea, said she voted for Shea because she didn’t want to vote against her friends India and Mayhem.

As for India’s accusations that Alexis was campaigning to send Shea home, Mayhem insists there was no campaigning. India insists that Alexis and Mayhem asked her on the side stage if she voted Shea off. Alexis said that asking who someone voted for wasn’t campaigning and she’s right.

Derrick was just happy that all of this drama didn’t involve her. Shea apologized for jumping to conclusions and Juju was happy that the queens had this chance to speak their minds. And there’s your reunion dish.

Get into the moves

After the lovefest, Juju, Cracker and Shea meet with Todrick Hall to, as Cracker said, “work off the snacks from the craft table” and learn their choreography.

Juju admits that she’s not a great dancer, but she has a lot of energy. Cracker says she flops around to hide the fact that she’s on  “one and three and not two and four.” Shea says she’s a big fan of “hand-ography.” Juju struggles with the moves and asks, “Can I just clap?”

Cracker is truly a beat behind. Juju gets bent over by the dancers and Miz Cracker has much less complicated moves, prompting Juju to mutter, “I got lifted up and this bitch gets thigh slaps?” Cracker is amused that Blair is doing all of the moves like she’s the understudy. She jokes, “hide your kids, hide your crown, Blair is ready to step in at a moment’s notice.” Cracker delighted that Shea’s choreo is complicated.

Shea isn’t, stating that she thought Todrick was “slightly overestimating my ability to pick up choreography.” I don’t know, she looked like she knew the steps pretty well.

While the Tic Tac lunch with Ru isn’t a thig anymore, the legacy lives on as the top three pop into Ru and Michelle’s podcast “What’s the Tee?” And when I say “pop”, I mean “pop”, because the queens spent a very short time in the “studio.” (Honestly, this segment seemed more like a chance for Ru and Michelle to hawk some products.)

Juju talks about songwriting (which is how she deals with her feelings, as opposed to drinking), the “new Juju” and the future of drag.  Cracker says she’s been doing drag for 10 years and says everyone has something to fight for and drag is political. She calls being in the top “a dream” and says this time there was less thinking and more exploding.

Shea talks about her drag evolution and says her drag has to come from the heart.  She put a lot of pressure on herself in season 9 because she wanted her family to see her win. She admitted she’s in therapy to deal with her inner saboteur, who she’s named “She Nae Nae.” She said being on All-Stars is like having “Deja Ru” and said that to win would be proof that if you never give up you can do anything. And that’s it. I was really hoping for more from the queens, but we’ve got a lot to cram in an hour.

Ru walks the runway in a gown with the surprisingly beautiful color combo of orange and lavender.

Juju is up first, clad in a sparkly leotard, thigh-high boots and a long red wig. She expertly sings and dances with some delicious boys in leather shorts. Cracker serves up a 1950s aesthetic in a cute pink gown and a blond wig, adding some humor to her verse by sitting on a dancer and “dancing” with his legs.

Shea looks amazing in a geometric pattern, black and white bodysuit, and a neon green wig. Todrick did not overestimate her skills, as her choreo is on fire. The number was pretty great, but it’s still no “Kitty Girl.”

When Ru says “bring back my All-Stars”, she means it, as all of the season 5 queens hit the runway. Derrick is serving an ice princess fantasy in an icy blue, full-length gown and goes full Elsa in a white wig and tiara.

Ongina is wearing a dress inspired by her season 1 finale dress. The fabric is a newspaper print and the skirt is short in the front and long in the back. She accessorizes with black latex opera gloves and stilettos – she’s even wearing the fascinator from that original look.

Mariah looks stunning as always in a silver trumpet skirt gown with leaves covering the bottom and a curly two-tone wig in blue and violet hues.

Mayhem is a tangerine dream in a glam “prancesuit” – and her hair and beat are on-point. India dons her trademark breastplate under a glittery nude illusion gown festooned with ostrich feathers. Her straight long blond hair contrasts beautifully with her dark makeup.

Alexis changes things up from her signature pageant gowns and looks great in a black and white striped pattern embellished with sequined circles and ruffles.

Blair creates a crown of hair to accompany her Swarovski crystal fantasy bodysuit with spikes covered with a diaphanous pink skirt and huge, sparkly boots.

And now, the top three. Juju looks fabulous as a super hero, superpower driven, enlightened version of Juju” in a Hindi Buddah-inspired look with a bejeweled bodysuit with a flowing orange sash, long gold nails and an ornate headpiece.

Miz Cracker goes back to her heritage in a Russian-inspired gown topped with a pink headpiece dripping with pearls.

Shea takes us back to the 1960s in a look inspired by Balenciaga (and her Mom’s prom dress). She looks so elegant in a pink a-line gown in satin and a bow-topped bouffant. I agree with the judges, who declared that this was an amazing runway.

To RuPaul, Thanks for Everything

It’s time for the crown to be passed to a new All-Star, which means we get an appearance from season 4 co-champions, Monét X Change and Trinity the Tuck, giving us their best Vida Boheme and Noxeema Jackson from the iconic To Wong Foo. For me, this was the highlight of the finale. Can we have a spin-off with these two?

Lip Sync for the Crown

It’s time. Miz Cracker, in an emerald green leotard with 90s Madonna-esque pointy boobs, Juju, in a golden, bedazzled body suit with fringe on the sleeves and Shea, in a violet beaded gown and matching wig, are ready to go to battle.

The song is Janelle Monae’s bop “Make Me Feel” and the queens turn it out. Shea shows off some amazing robotic moves, Juju gives us some floor work and ferocity and it appears there was supposed to be some sort of stunt with Cracker’s boobs that looked like it didn’t go off as planned. This was definitely one of the most fun lip syncs of the season.

The newest member of the All-Stars Hall of Fame is…Shea Couleé! The honor is well-deserved, as Shea definitely Ru-deemed herself after season 9’s “rose-gate.” She excelled at every challenge and her fashions were amazing. Congrats, Shea!

And that wraps it up for another season of All-Stars. Until we meet again for season 13 or All-Stars 6, remember that if you can’t love yourself, how in the hell are you gonna love somebody else?  Can I get an amen?

The Five — A Trustful Pup, a Baby Sloth, a Tricky Dog, a Cool Kite, and a Watermelon Bath