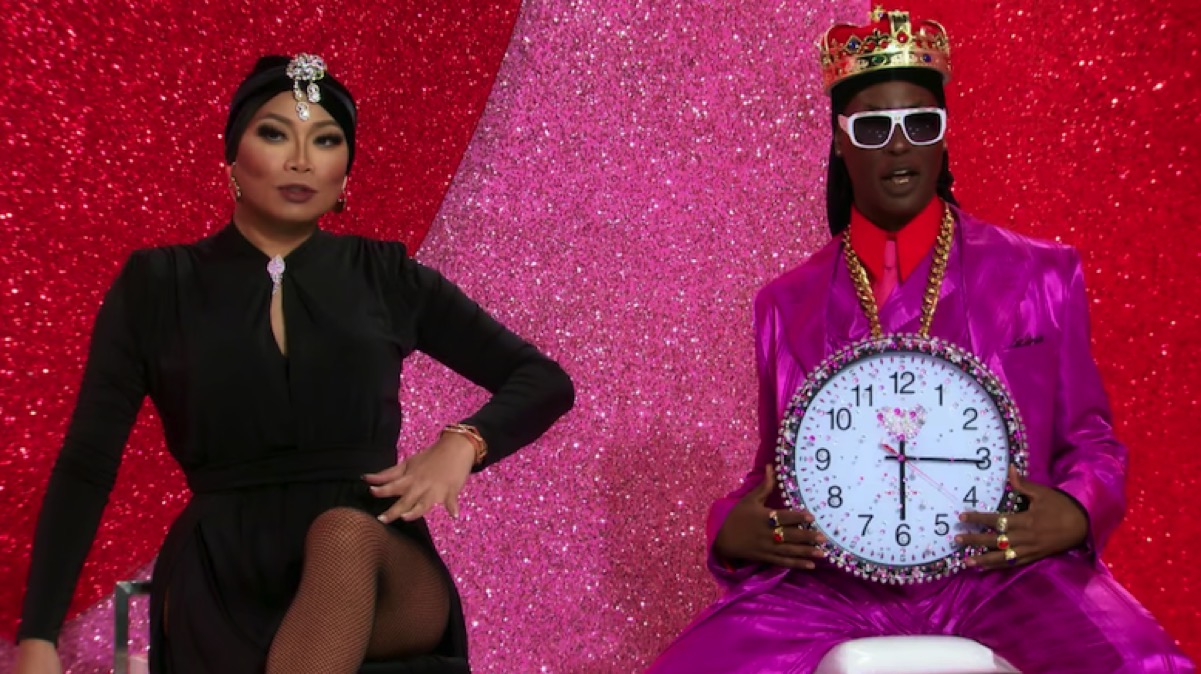 Welcome back to another week with RuPaul’s Drag Race All Stars! We are down to six queens and this week they face their biggest, most anticipated test – serving their best celebrity impersonations as they play the Snatch Game of Love.

Some rise to the occasion and some positively flounder. Afterward, the queens bring their best prom realness to the runway. This week’s winner faces off against a fierce lip-sync assassin and we say goodbye to one of the OG queens.

Let’s take a look at the highlights from the episode.

As she was preparing her Snatch Game character, legendary Catwoman Eartha Kitt, Juju reminded us that her cats are her BFFs. She shows us photos of Priss and Mister and is such a proud cat Mom. All I could think of was his hilarious tweet from a few weeks ago when during the elimination, she joked about her cats instead of addressing the drama at hand.

Snatch Game of Love, a/k/a the Shea and Jujubee Show

The Snatch Game has brought us some amazing performances – from Pandora Boxx’s (and Bob the Drag Queen’s) Carol Channing to Bianca Del Rio’s Judge Judy. It’s also brought out the worst in some of the queens, such as Mariah’s Joan Crawford and Kenya Michaels’ Beyoncé.

The queens this season came up with some out-of-left field choices as well as some classics – one that worked and one that didn’t.

In the first round of Snatch Game, our eligible bachelor is Atlanta’s own Tommy Dorfman from Netflix’s 13 Reasons Why. He has to choose between Miz Cracker’s Star is Born-era Lady Gaga (have we not learned from Phi Phi O’Hara and Sonique that this is a bad choice?), Alexis Mateo’s Walter Mercado (the recently deceased and flamboyant psychic) and India Ferrah’s Jeffree Star (which, given the current drama surrounding the now-canceled makeup maven, is an unfortunate choice, one that has made India the recipient of some nasty comments – STOP THAT.)

Cracker recycled the “100 people in a room” line and in the words of Willam, gave us nooch. She was completely in her head and it showed. Alexis’ Walter Mercado was spot-on and cracked Ru up consistently.

And then there was India. Poor India. Ru was setting her up and she was whiffing every softball thrown at her. Blair said India was “hard to watch” and she was right. Alexis brought the jokes and my favorite was when asked what India’s breath smelled like, she answered, “It smells like confusion and lots of regrets.”

Not surprisingly, Alexis wins, hands down.

Round 2 sees UnREAL star and Drag Race Canada’s Jeffrey Bowyer-Chapman choosing between Blair St. Clair’s Ellen DeGeneres, Jujubee’s Eartha Kitt and Shea Couleé’s Flavor Flav. While Blair did look like Ellen, her performance was overly awkward. Juju said that to stand out as Eartha Kitt (over past Earthas Chi Chi DeVayne and Valentina (and Jackie Cox too) she said she was going to play up the cat movements and was “serving up this piece of pussy.”

When Jeffrey asked how she could keep him warm at night, she responded, “I would sensually walk over to the thermostat and turn it to a sensible 74.” In a word, she was purr-fect.

Shea thought it a “risk” to play a guy (although Kennedy Davenport’s Little Richard was a performance for the ages) but said Flav is drag and camp and proved it. From the oversized suit, to the clock and grill, Shea was amazing and definitely put herself into the Snatch Game Hall of Fame.

The best moment was when Flav asked, “Do you know what time it is?” and added, “No, really. My clock’s been stuck on 4:20 since 1985.” Can we remake Flavor of Love with Shea as Flav? Please?

Even though the Snatch Game was rather subpar (save for Juju, Alexis, and Shea), Ru looked like he was having a blast throughout this whole episode and his goofiness was truly endearing. He was cutting up with guest judge Jeffrey throughout the episode.

When he showed up at Snatch Game, Ru got right up in his face and asked “Is that the shirt I bought you?” to which Jeffrey said, “It still smells like you.” And, at the end of the game, Jeffrey told Ru that, “You had me at hello, hello, hello” and carried him away, Officer and a Gentleman style. Later, on the runway, Ru mused that “People crazily think we have some kind of sexual tension.” Jeffrey said, “that’s crazy” and then the two made goo-goo eyes at each other.

I loved every minute of it. Could this be the next Drag Race spin-off? I’d watch.

Ru once again strutted out on the runway looking truly amazing, in a huge and colorful full-skirted gown and a mountain of white curls. Miz Cracker is giving me Hairspray vibes with her bouffant hairdo. She went the funny route, pairing her pink showgirl-esque dress with a face full of zits. Alexis gives us full quinceañera glam in a red gown. The top is a lace corset and the skirt is tulle-rific.

India is wearing a gothic gown with a beautiful corset. She’s serving “Morticia Addams goes to the prom” with gorgeous gothy tears dripping from her eyes and beautiful red hair. Blair wears a gender-bending red tuxedo dress with a tiny crown revealed under her top hat. Her sparkly makeup is stunning.

Jujubee brought us back to the 80s with her lavender gown and huge, crimped hair. Shea brings the house down with another avant-garde look, giving us Carrie meets Sasha Velour at the finale. It’s breathtaking

The Shade of it All

After the judges’ critiques, it’s no surprise that Shea is the big winner. Ru then announces that none of the queens are safe this week, meaning they are all up for elimination. The queens are shook, but India is the only one who decides to plea her case to Shea.

She attempts to throw Alexis under the bus, telling Shea that she was on a campaign to get her eliminated from the get-go. India said Shea didn’t necessarily have to eliminate Alexis, but she should definitely keep her around.

Alexis, of course, denied the whole thing, so we’re going into the lip-sync without really knowing who Shea is going to send home. And there’s your weekly dose of drama

This week’s lip-sync assassin is none other than Alexis’ drag daughter, the one and only Vanessa Vanjie Mateo. She and Shea perform Madonna’s “Open Your Heart” and it’s as good of a lip sync as you would think, with both queens giving it their all, complete with death drops and splits.

Ru declares Shea the winner and, when she reveals her lipstick, it’s India’s time to say goodbye. I love India and am so glad she got this chance for a Ru-demption – and I can’t wait to see her in Vegas again.

That’s it. That’s the highlight.

That’s all for this week, until we meet again, just remember that if you can’t love yourself, how in the hell can you love somebody else? Can I get an amen?