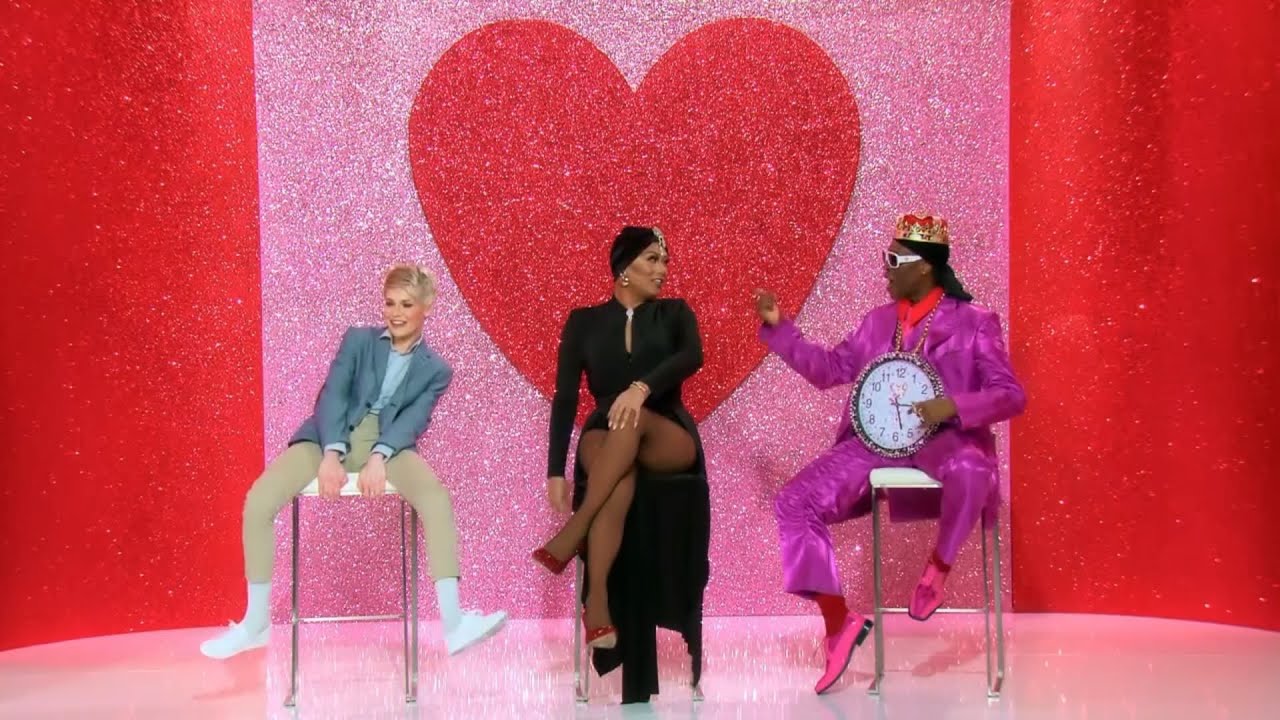 Start your engines, RuPaul’s Drag Race fans, because we have lots of news, reviews and updates from your favorite queens.

Last week saw the All-Stars compete in the “Snatch Game of Love” and our favorite “Ru-cappers” had a lot to say about the celebrity impersonations and prom runway fashions. We also have news on some events where you can see your favorite queens live in a whole new way, a virtual show that’s sure to be magic, and videos from Bob the Drag Queen and Willam that are sure to make you smile.

Let’s check in with the queens of the Drag Race universe.

Bob the Drag Queen has the ability to recruit some very funny and often brutally honest queens to discuss All-Stars on “The Pit Stop” and this week is no different. Bob and a very unfiltered (and giggly) Jinkx Monsoon review the “Snatch Game” episode and it’s honestly funnier than the episode itself.

Raja and Raven, serving prom king and queen realness (I am in love with Raven’s updo) toot, boot and shoot the prom-inspired runway fashions on “Fashion Photo Ruview.” Drinking game idea: take a shot whenever one of them say, “Next we bring to the staaaage.”

Monét X Change is always a delight, and I love her unique take on All-Stars (especially because she’s a Hall of Famer herself.) Enjoy her latest “Xposé” and meet her adorable cat.

Another queen who isn’t afraid to tell it like it is, Nina Bo’Nina Brown, is back for another “Rawview.” As much as I love her over-the-top looks, it’s always nice to see her giving us some glam and this week, she’s a beauty in blue.

Yuhua Hamasaki and Kennedy Davenport are back to rate and review the prom fashions and kiki on the latest “Bootleg Opinions.”

Last, but certainly not least, the gorgeous Kimora Blac, sporting the coolest eye makeup look I have ever seen (we need a tutorial for this) shares her thoughts on the Snatch Game episode while looking fierce doing so.

Our latest eliminated All-Star, India Ferrah, is the guest on “Whatcha Packin’?” with Michelle Visage. She discusses her post-season spiral after her season 3 elimination, quitting drag for a while, and coming back with her move to Vegas. She also shares how she has been mending fences and her relationship with Mimi Imfurst. As for her experience on All-Stars, she discusses the season 5 twist, lip-syncs assassins, and the drama with Derrick Barry and Alexis. I love India and I’m glad she’s had this chance for a ru-demption (and whenever Drag Brunch comes back to Las Vegas, definitely go see her. She is a hell of a performer.)

Miz Cracker’s impersonation of Lady Gaga on “Snatch Game of Love” wasn’t the best, and fortunately, she’s self-aware enough to be able to laugh it off. She makes fun of her depiction of Mama Monster in the Game of Thrones-inspired parody video, “I’m Sorry.” It’s vintage Cracker and I love it (and, of course, we forgive you.)

If you were ever curious to know how Miz Cracker spends her day, she tells all to Vanity Fair. Find out her morning and show day routines and how she crams so much activity into 24 hours. Cracker says as far as eating, anything with cheese and carbs will do. She is my soul sister.

While we aren’t recapping Canada’s Drag Race here at Socialite Life, we have left you in the very capable hands of some fabulous queens as they look back at the race for the first drag superstar of the Great White North. Drag Race UK’s Vinegar Strokes is hosting season one’s “Extra Lap Recap” and Manila Luzon and Latrice Royale are covering the show for their amazing podcast, “The Chop.” Check them out, eh?

Trixie Mattel’s cosmetic collection is a must for the makeup aficionado (like me) and, for those of us who still apply a full face of makeup even though we’re still in quarantine (guilty), the news that she is launching a new collection was more than welcomed. In this video, Trixie shows off her “Insider Collection” featuring new lip colors and gloss. I must own a tube of Mellow Drama, stat.

Asia O’Hara takes a look back at most memorable moments in Drag Race her-story in “10s Across the Board.” This week, she focuses on the ten most gag-worthy fashions on the runway over the past 12 seasons. I had my hopes for who would be picked as number one and I wasn’t disappointed.

Bob the Drag Queen schools us on drag slang in this video from Vanity Fair. If you don’t already know the origins of terms like “purse first”, “house down boots” and “no tea, no shade,” you might be living under a rock. But hey, who wouldn’t want to spend 11 minutes of their day with Bob?

Willam is back with another “Beatdown.” This week, she takes on the DragCon UK debacle, a woman whose mission is to jazzercise for the Lord and the infamous “Pinky the Cat” video.

The queens are coming up with some creative ways to perform live for you and one of the ways they’re doing it is with drive-in shows. We mentioned this last week but wanted to remind you that Voss Events’ new live experience, Drive ’N Drag, is coming your way soon. Acid Betty, Aquaria, Asia O’Hara, Gigi Goode, Kameron Michaels, Kim Chi, Monét X Change, Naomi Smalls, Plastique Tiara, Vanessa Vanjie Mateo, Violet Chachki, and Yvie Oddly are performing live on stage at drive-in theaters, with their sickening routines broadcast on the theater’s giant screens.

Attendees will get the live theatrical experience from the safety of inside or on top of their cars with concert style stage and lighting, Jumbotron screens and sound pumped outside from the stage and through every car via FM transmitters. Multiple shows will run all weekend long, from 12PM to 11PM. Food and beverages will be available via Gourmet Food Trucks and early shows will even include Voss Events’ famous Drag Brunch with a special brunch menu!

The outdoor summer concert series will hold court July 17-19 at the Garden State Plaza in Paramus, New Jersey (20 minutes outside of New York City), and July 24-26 in Los Angeles. Multiple shows will run all weekend long from 12pm to 11pm. Additional shows are scheduled for Boston, Chicago, Seattle and Washington DC. Tickets are available now on the Voss Events website.

Another queen coming to a drive-in near you is the iconic Lady Bunny, who is bringing her “Pig in a Wig” show to the Westfield Garden State Plaza in Paramus, New Jersey on July 19th at 5 pm. Of the delightfully raunchy revue, Bunny says, Laughter, not Clorox, is the best medicine, so if you’ve been cooped up for months and are ready to unwind from the safety of your own car, I’ll cure your cabin fever and make you laugh your masks off!” You can also get tickets for this show through Voss Events.

Our favorite wig magician, Jaymes Mansfield, once again brings us another amazing wig transformation. In this video, she makes a Dramarama wig from Rockstar into the biggest hair ever.

Monique Heart chats with “Hey Qween” about her makeover of the show’s co-host Lady Red Couture, the Black Lives Matter movement and shares her thoughts on All-Stars 5. You can check out the first part of the interview here.

The Vixen is back with another Black Girl Magic show with an impressive cast of Drag Race favorites including Latrice Royale, Yvie Oddly, Jaida Essence Hall, Chi Chi DeVayne and Trinity K. Bonet. The show streams on Twitch on Wednesday, July 15 at 9 pm.

RuPaul’s DragRace UK’s Cheryl Hole has a new podcast, brought to you by the fine folks at World of Wonder. On Girl Group Gossip with Cheryl Hole, the Essex stunner – and confessed girl and a special guest analyze and assess some of the most iconic girl groups in herstory. Cheryl’s DRUK castmate, Blu Hydrangea, was the guest on the premiere episode and you can listen wherever you stream your podcasts. Socialite Life is chatting with Cheryl about the new show next week, so stay tuned!

And so, we wrap up another week with the queens. Until we meet again, I leave you with Aquaria performing Ru’s “Kitty Girl” and playing all of the parts – Kennedy, Shangela, Bebe, and Trixie. Stay safe, stay healthy, wear a mask, remember that Black Lives Matter and say LOVE!