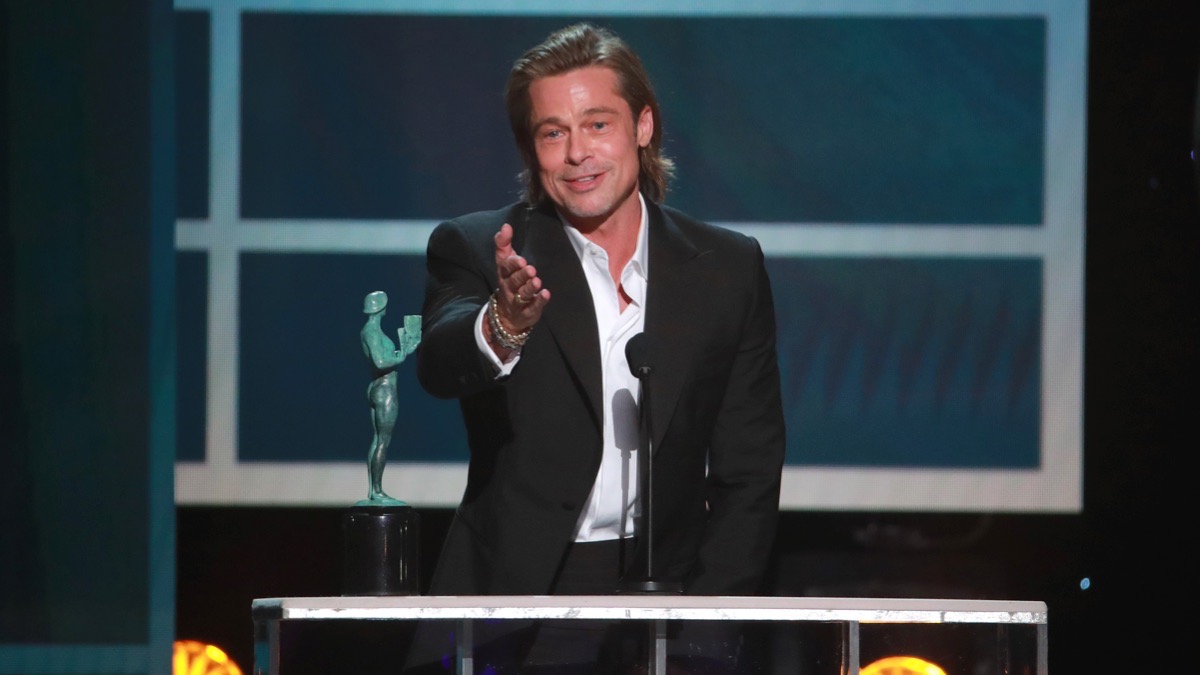 Brad Pitt‘s acceptance speech at the 2020 SAG Awards was on fire!

The Tinder dating app got an unexpected shout out after the actor won the SAG Award for Outstanding Performance by a Male Actor in a Supporting Role for his work in Quentin Tarantino‘s Once Upon a Time in Hollywood, with the Pitt admiring the actor statue when he reached the stage before uttering a quip that garnered a raucous laugh from the star-studded crowd.

“I got to add this to my Tinder profile,” Pitt joked.

The actor went on to accept his SAG trophy by poking fun at director Quentin Tarantino’s well-chronicled obsession with his actors’ toes, telling the audience, “I want to thank my costars Leo, Margot Robbie, Margot Robbie’s feet, Margaret Qualley’s feet, Dakota Fanning’s feet… Seriously, Quentin has separated more women from their shoes than the TSA.”

He then went on to joke that the role of Hollywood stuntman Cliff Booth was the role he was born to play.

“Let’s be honest, it was a difficult part: the guy who gets high, takes his shirt off, and doesn’t get along with his wife,” Pitt joked, a line that elicited a whoop and applause from Pitt’s own ex-wife, Jennifer Aniston.

One of the sweetest moments of the night happened backstage. After delivering his speech, Pitt went backstage and stopped to watch Jennifer Aniston deliver her acceptance speech for best actress in Morning Show, smiling and laughing at his former partner’s exuberant remarks.

The pair were later snapped greeting each other, likely to the explosive delight of tabloids all over the world.

A full list of 2020 SAG Awards winners follows below.

Outstanding Performance by a Male Actor in a Supporting Role
Jamie Foxx, “Just Mercy”
Tom Hanks, “A Beautiful Day in the Neighborhood”
Al Pacino, “The Irishman”
Joe Pesci, “The Irishman”
Brad Pitt, “Once Upon a Time…in Hollywood” *WINNER

Outstanding Action Performance by a Stunt Ensemble in a Motion Picture
“Avengers: Endgame” *WINNER
“Ford v Ferrari”
“The Irishman”
“Joker”
“Once Upon a Time… in Hollywood”