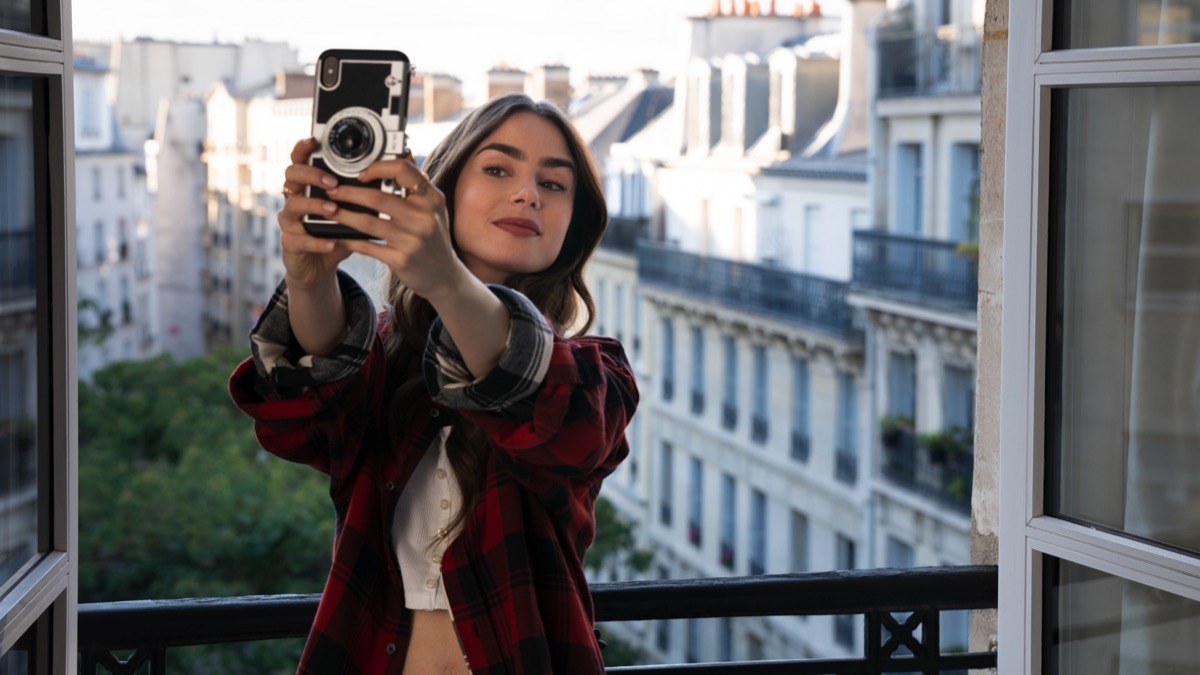 Netflix’s latest series, Emily in Paris, starring Lily Collins, is proving to a bit hit for the streaming network as it has been on the site’s top 10 most-watched list since the show debuted on October 2, 2020. The show revolves around a 20-something, ambitious, and talented digital marketing executive who moves from Chicago to Paris for a job without friends or knowing how to speak French.

Darren Star, who created Sex and the City and Younger, gives us the Parisian version of those shows with Emily in Paris. Upon her arrival in Paris, Emily’s primary job objective was to bring an “American point of view” to Savior, a French marketing agency. At first, there are bumps in the road pertaining to Emily’s new job (everyone hates her). Eventually, her social media campaigns win over her warry co-workers and see Emily living her dream.

Like Carrie Bradshaw in Sex and the City, Emily has a wardrobe the is most likely much more expensive than her salary can afford, but hey, it wouldn’t be a Darren Star show without fabulous clothes.

Emily in Paris Versus the Critics

So what is making the influencers and French TV critics so upset? One major critique of Emily in Paris is that the show uses way too many clichés’ regarding the city of Paris and Parisians.

RTL, a French radio station, wrote per The New York Times, “Rarely had we seen so many clichés on the French capital since the Parisian episodes of Gossip Girl or the end of The Devil Wears Prada.” While Sens Critique stated, “[You] have to strongly love science fiction to watch this series, knowing that Parisians are mostly friendly, speak irreproachable English, make love for hours and that going to work remains an option.”

One review wrote on the popular film and TV user review site AlloCiné (via The Hollywood Reporter), “Embarrassing series, completely wrong image of Paris. It’s ridiculous, badly acted. As if Paris was all about fashion, romance, and croissants. No.” However, not all the reviews were scathing, as one reviewer wrote, “Relax, it’s a series, and there is nothing very bad! I found it funny and light.”

Emily in Paris Verus the Influencers

Telling Vulture, influencer Lamia Lagha said of the photo set up, “Uh, I don’t know. This is too much for me. I would not do that. She’s trying to find the easiest way to get more and more followers who respond to these kinds of clichés. “She’s playing that game. And it doesn’t feel [contemporary]. Paris has changed so much,” Lima added.

In another scene, Emily takes a photo of a male statue, posts the photo to Instagram with the caption, “Chiseled abs.” Initially, influencer Monica de La Villardière laughed at the premise of the scene. Still, then she admitted, “This is the sort of humor I do enjoy and try to bring to my own account. A lot of the time, people don’t totally understand my humor,” she stated, “but I think Emily made a funny, and she should keep going in that direction.”

While those “in the know” may not be fans of the series, the fact that Emily in Paris attracts a ton of viewers leads us to believe that everyone is looking to devour a binge-able guilty pleasure!