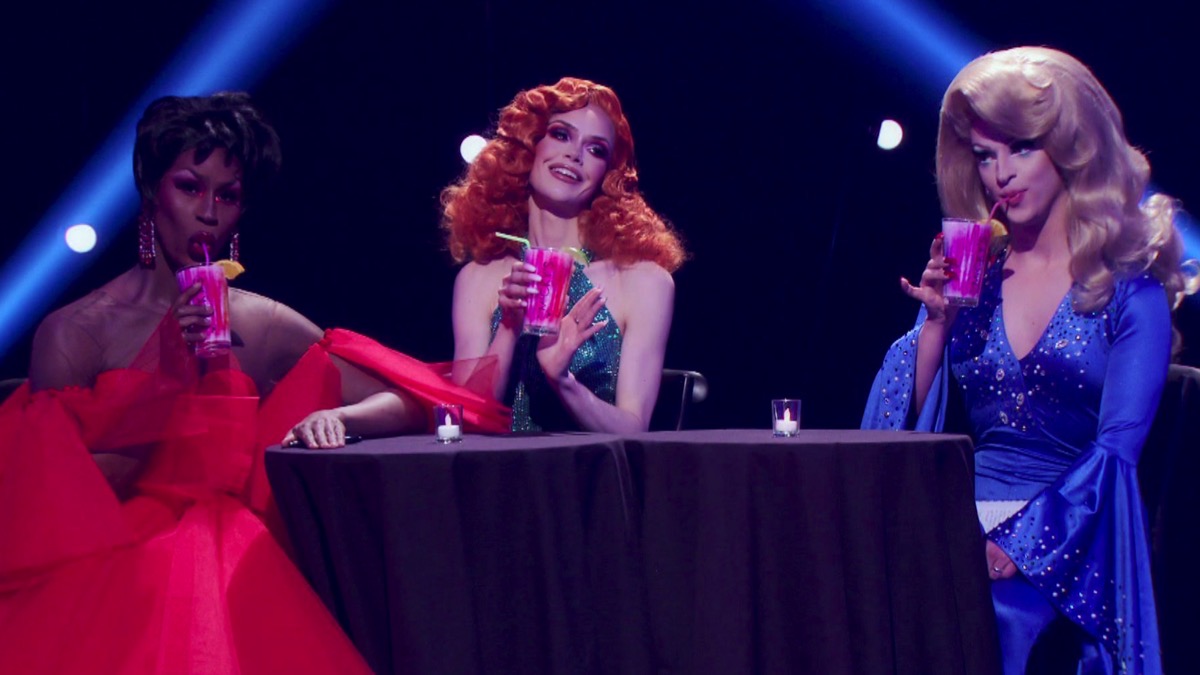 Can you believe we are almost done with this season of RuPaul’s Drag Race All Stars? We are down to the final four and this week, the queens need to work their funny bones and perform a stand-up comedy set at “RuPaul’s Shady Shack”.

There’s laughter and tears and some fierce, freaky fashions on the runway and, in the end, we have our final three. Let’s take a look at the highlights from this she-larious episode.

After Alexis’ elimination, the remaining queens kiki in the werk room and Cracker mentioned that she was glad she wasn’t the one who had to make the decision to send Alexis home. Juju asked her who she picked and with a sigh, she said that she wanted to avoid an awkward moment adding that she thought long and hard about her decision and, of course, revealed she voted for Alexis. Juju replied to this by telling Cracker, “I want to punch you so hard in the face right now.”

Cracker hilariously misread Alexis’ mirror message, mistaking “AS5” for “ass.” Yes, it’s not a huge highlight, but it made me giggle.

Since Cracker won last week’s challenge, she gets the advantage this week by putting together the order of performances and she’s playing tough, stating that “nobody’s getting a good spot.” And she’s right. She said opening the show is the toughest spot, so she put Juju as the first performer. Cracker tells Blair she has to follow Juju, which  I wouldn’t want to do. Hoping that Blair trips up, she puts herself third, leaving Shea to close the show. Cracker is playing the game, and I love it.

The queens get coached this week by Ross Matthews and special guest Jane Krakowski (who was so great with Ru on AJ and the Queen…RIP) Juju squeals with delight when she sees her and is reassured that being first is not a disadvantage, but her jokes need some work.

Blair and Jane follow each other on Instagram and Jane says Blair has “The most beautiful Instagram feed I’ve ever seen.” (She’s not wrong.) Blair actually made Ross and Jane laugh and Jane added that she was impressed she was able to bring so much material.

Cracker sees Jane and is so stunned, she walks back off stage. Cracker tells them that this is a moment when they would cut away to him saying how much she loves her and, of course, they do. Cracker really loves Jane. When it comes to her comic TED Talk, Ross and Jane aren’t impressed.

Shea, who has struggled the whole episode, got some polite laughs from Jane and Ross and was advised to look at the Sasha Velour incident as a source of humor. Shea isn’t sure she’s ready to take that challenge on and is more unsure than ever.

After Ru hits the runway in another stunning gown, she introduces the judges, who include Sam Richardson from Veep and Bojack Horseman and then Stand-Up Comedy Smackdown begins. Juju is a vision in blue and gets off to a slow start. Hen she starts going in on her fellow queens, the fun y comes out.

When talking about Ross’ book, she says, “so, Blair, a book is a whole bunch of pages….” She then cracks a naughty joke about Gwyneth Paltrow and laments, “I wish I had a blonde joke, but there’s one over there” as she gestures towards Cracker. She closed by telling Michelle that she felt about her like she did her own mother, “resentfully.” That was some good Juju.

As always, Blair looks amazing, in a copper wig and a teal sequined dress. She jokes that Michelle is “the first lady of New Jersey, the very first.” She fumbles with her notebook and lobs some odd insults at Sam and Jane (speculating how she managed to escape from the old folks’ home.) Yikes. Juju gives the perfect review of her set when she says, “I do declare this is a dumpster fire.”

Miz Cracker is also rocking a blue hue in a bedazzled jumpsuit and her signature big blond hair. She says Drag Race isn’t like the Olympics of drag, but more like “Gay-tanamo Bay.” Her delivery was polished and hilarious, and she dropped some great jokes like, “I’m like Shea Couleé’s music. Nobody listens to me.”  She won the crown over and really nailed it.

First off, I didn’t care if Shea was going to be funny, because she looked amazing in a glamorous red tulle gown. She got the crowd engagerd by stating they had time during Cracker’s set to take a nap and joked that Blair had a tough week because “she failed her driver’s test.”

She said she was going to therapy and realized it wasn’t just for “white people with money” but also for “black people…with money.” She also tool Ross’ advice and talked about season 9, joking that “rose petals follow me like I’m James Earl Jones in Coming to America. The only difference is, he had a crown.”

The theme for the runway this week is “Freak Out” and the queens delivered. Juju looked like a 90s club kid in a colorful bodysuit with a huge mask/headpiece and an oversize soft sculpture chain. She removed the mask to reveal a glittery mug and as for her footwear, she joked,  “These shoes are 10 inches and I can only take 7 on a good day.”

Cracker wears a black and white caftan, a crow-esque mask and a huge hat. She removes her “post-apocalyptic steampunk death mask” and caftan to reveal a nude illusion bodysuit with gorgeous black stone detailing and hair that would make 70s-era Cher jealous.

Shea served up 90s raver realness” in a fuzzy, colorful coat over a hot pink bondage bodysuit and Cookie Monster platform shoes. My favorite look is what India was going to wear.

A lip sync that won’t let you down

Cracker wins again, and gets a South African getaway (if you haven’t gone yet, can you take me?) After the other three plead their case to stay, Cracker is lip-syncing for her legacy and is up against another iconic lip sync assassin, season 7/All-Stars 3’s Kennedy Davenport.

Cracker looks great in a white dress and long, straight blond ‘do and Kennedy is dressed for battle in a sparkly red bodysuit topped with a black and white graphic kimono and a big, beautiful wig. Cracker runs off of the stage when Kennedy arrives because she knows she’s going to have to work to win – she even does a few stretches to get prepared.

The song this week is Reba McEntire’s classic, “Fancy.” I thought every drag queen knew this song, but watching this, it appears it’s not in Kennedy’s repertoire. It’s obvious she doesn’t know all of the words, and this gives Cracker a chance to shine, which she does – although, to be honest, I was expecting more from this one.

Ru declares Cracker the winner and she gets $20K to spend in South Africa. And, speaking of declare, Blair St. Clair is the queen who must sashay away.

Next week is the finale! Who are you rooting for? A new All-Star joins the ranks next week and this finale is sure to be a nail biter. Until then, remember that if you can’t love yourself, how in the hell are you gonna love somebody else? Can I get an amen?  Oh, and could someone explain what happened after Ru asked the same thing?