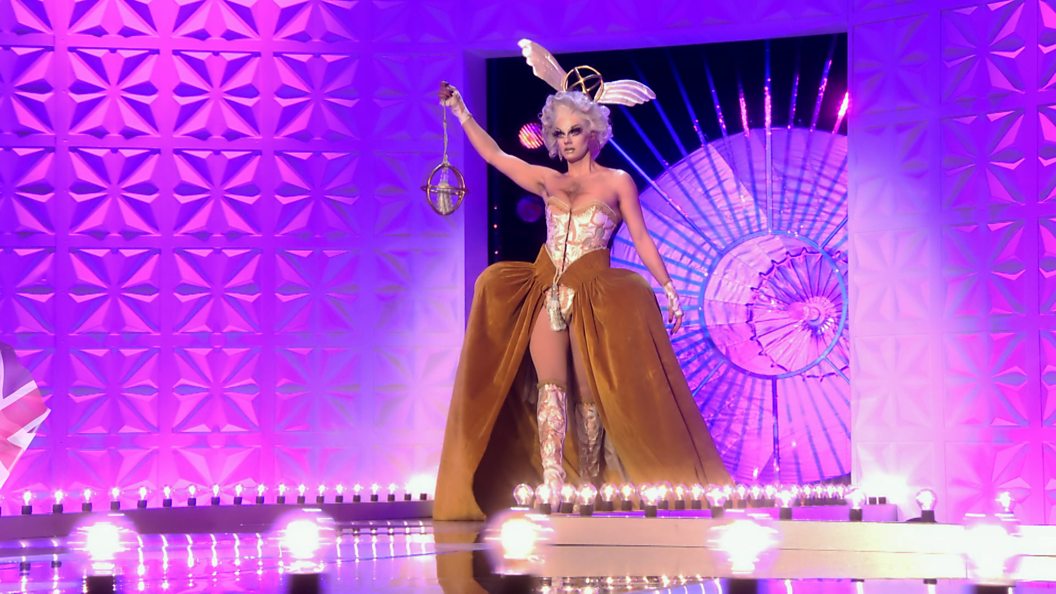 Every episode of RuPaul’s Drag Race UK just keeps getting better and in the third episode, we get two of our favorite things: quick drag and a fashion challenge. Let’s get into it!

In introducing this week’s mini-challenge, RuPaul says it’s time for the queens to show both their “classy” and “assy” sides. They have 15 minutes to get into quick drag and serve up “English rose” realness and then “worship the pole”, the maypole, that is. The gals scramble to get ready to mixed (but hilarious) results.

The challenge is a variation on musical chairs, with the queens circling the pole daintily to chamber music and, when thy music stops, one queen has to show off their nasty sides to the Ru/Big Freedia hit “Peanut Butter.” (One of the best videos EVER.) And these queens got raunchy. Divina did the spilts, Crystal worked the pole like J-Lo in Hustlers and Cheryl Hole brought us the first death drop of the season. Cheryl ended up the victor for the mini challenge. I think Crystal got robbed.

Did you catch the moment The Vivienne rips off her eyebrows before getting into quick drag? I screamed out loud when she did that – but at least it explains how she can have such manly brows during the confessionals. This show never ceases to pleasantly surprise me.

After the maypole challenge, it was time for the main challenge, where the queens had to construct fashionable looks with items from a car boot sale (think of the thrift store challenges from Drag Race US.) The Brit Crew drives in with the car in question and it had the most beautiful hood ornament ever, season two and All-Stars favorite Raven. Since Raven does Ru’s makeup (to perfection) every week, it’s not really a surprise that she’s there, but definitely a welcome guest.

4. The Vivienne and Baga Chipz pay tribute to Thelma and Louise

While the queens are putting together their runway looks, The Vivienne and Baga take a moment to have a laugh before they get to the fashion. This may be just a quick clip, but I wouldn’t be mad to see these two in a future buddy comedy together.

After landing in the bottom two and worried that she didn’t belong last week, the pride of Northern Ireland, Blu Hydrangea bounced back with a heaping helping of shade towards the other queens. Of Scaredy Kat’s elimination, she exclaimed that, “The dead weight is gone. Scaredy Kat is now roadkill.” She later asked Divina De Campo, “Will you tell me about when you started drag in the 1800s?” But Blu saved the lion’s share of shade for Mama Ru herself. During the walk arounds, Ru asked Blu,”Do you have a silhouette that always works for you?” Blu replied, perhaps temporarily forgetting Ru’s affinity for ball gowns, stating, “I quite like trousers. Ball gowns are fun but I just think they’ve been done to death,” before quickly adding,”No offense.” In the confessional, Blu said, “I have to try and be nicer,” and admitted, “I swear I’m a nice person it just gets so bitchy in here.” The shade of it all.

Vinegar Strokes, while a phenomenal performer (as Michelle Visage can attest to), has been repeatedly called out on the runway for her questionable fashions. She has difficulty finding her inspiration for her runway look, first attempting to use toothbrushes and later putting a toilet seat around her face. Eek. During the walk throughs in the work room, Ru has a heart-to-heart with Vinegar about her fashion sense, and it isn’t pretty, with Ru calling her aesthetic “hodge podge”, which is defined as a “confused or disorderly mass or collection of things.” Sadly, this sounds about right.

7. The judges are our favorite Judys

As always, Ru stunned on the runway in the amazing sequined, red ruffled dress she worked in the promos for DRUK. Michelle also looked especially gorgeous this week, with wild hair and an all-black ensemble. Graham Norton will not ever be not adorable. But I can’t not ack knowledge Dame Twiggy – she is amazing. If you don’t know her, she was the supermodel of the late 60s/early 70s. Everyone from Cheryl Tiegs to Cindy Crawford (and so many more) owe their careers to her. She is 70 and looks amazing and I’m not the only one happy to see her on the judges’ panel. Baga gushed, “I love you, Twiggy! I love you so much!” I completely agree.

This is always one of my favorite runways of the season, as I love to see the “C” that usually stands for “charisma” now stand for “creativity.” Some of the queens definitely brought it, like Divina’s fashion-forward, Tilda Swinton-y androgynous look, crafting plastic laundry bags into FASHION. Baga gives us the UK’s take on Monét X Change’s sponge fashion, substituting steel wool for the sponges. Not a fan of the look, but l Iove the Ginger Spice-esque wig. Blu gives us a pink and yellow neon ensemble that mirrors Chad Michaels’ look on All-Stars (and I am 100% okay with this.)  Sum Ting’s jacket and skirt look surprisingly well-tailored, but her lack of a blouse underneath made for an awkward runway walk. The Vivienne brought the drama in a gown adorned with strips of old VHS tapes. As someone who made it a Blockbuster night many a time, I loved it. Vinegar is the second blouse-less queen, in a barely-there dress made up of pages from a book. It’s been done way better, just saying.  I don’t mind Cheryl’s look, and for a queen who (admittedly) can’t sew, I kind of liked her miniskirt fashioned from the fingers on rubber gloves (the caution tape panties were also cute.) Crystal is serving ”neoclassical goddess” and looks positively gorge.

After the runway, Ru declares Baga and Blu safe. The tops are The Vivienne, Divina and Crystal and, deservedly, Divina is the big winner. I’m so glad she got this “Ru-demption.”

The highlight of this week’s mini Untucked (which I am loving) is when The Vivienne parrots what we’ve talked about for years regarding Drag Race (post the first few seasons), queens gotta sew. And she’s 100% correct. You go, Miss The Vivienne.

10. Vinegar and Sum Ting lip sync for their lives

Sadly, Sum Ting Wong and Vinegar Strokes ended up in the bottom two this week. Yes, the queens with the most difficult outfits to lip sync in ended up in the bottom two and had to lip sync for their lives to the Eurythmics classic “Would I Lie to You?” Sum Ting ended up removing her tight skirt to move (and showcase her bottom for the judges) and Vinegar ripped apart her flimsy outfit during the song to impress Ru and the judges and, to be perfectly honest, I really enjoyed both of their performances. I thought that there may have even been a double save, but Ru had other ideas. In the end, Vinegar was sent home and left us with a catch phrase I am sure is now all the rage in bars at closing time, “So long, gay boys.!” I will miss Vinegar and her hodge podgery.

Next week, get out the Google, because the queens are taking on UK celebrities for the Snatch Game and Geri Horner (a/k/a my favorite Spice Girl, Ginger Spice) joins the judges’ panel. Until next week, cheerio!