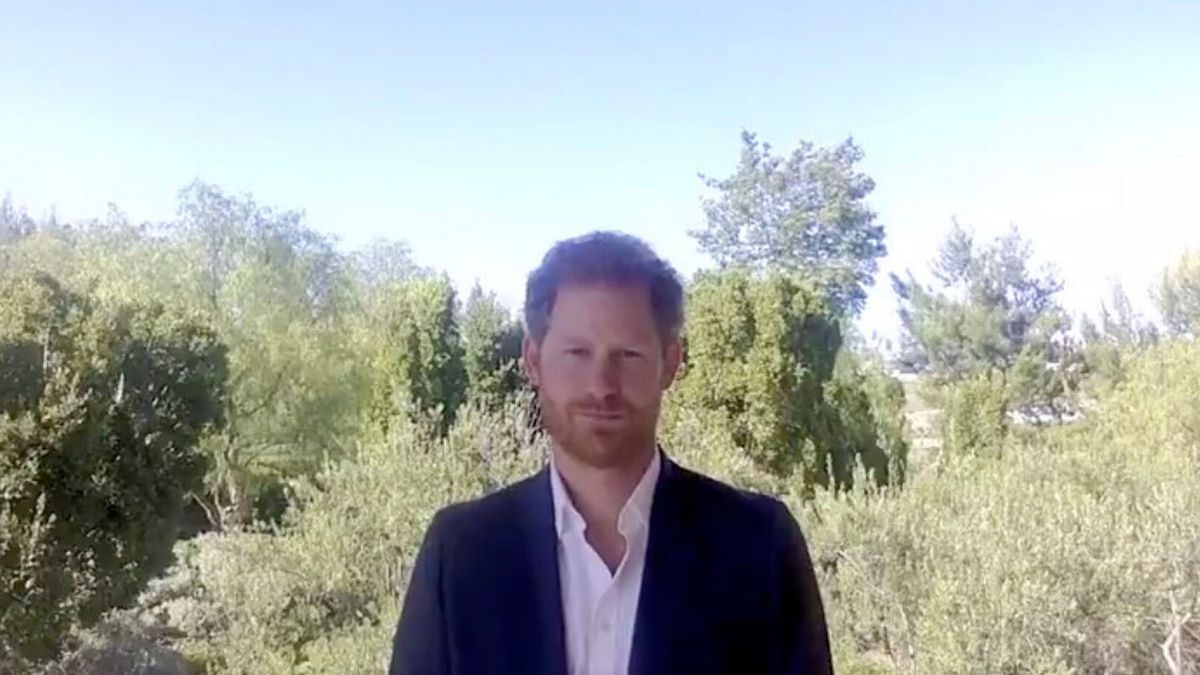 Prince Harry has appeared in a new video message, filmed from his mansion in Los Angeles, during the Opening Ceremony of the 23rd International AIDS Conference on Tuesday.

Speaking from the garden of his new home that he shares with wife Meghan and one-year-old son, Archie, Harry gave a virtual speech for his charity Sentebale.

“For those who have been affected by HIV and AIDS, the examples of resilience within one’s self and the community, have been felt and fostered for decades.”

Prince Harry set up Senteable, which means forget-me-not, Princess Diana‘s favorite flower, with Prince Seeiso in 2006 after learning about the disease during his gap year in 2004.

Meghan and Harry have shared a number of video messages from LA since lockdown was introduced, but this it the first time we’ve seen the garden.

The couple is currently living in Tyler Perry’s $18 million home, and the actor and director is said to have given the royal couple the run of the expansive pad, which sits in an exclusive gated community called the Beverly Ridge Estate.

The house Tuscan-style villa boasts eight-bedrooms and 12 bathrooms and was custom-built by Perry after he bought the 22-acre site back in 2004. (ET Canada)

This latest live-action adaptation of the boy who wouldn’t grow up is being targeted for a theatrical release, unlike the Lady and the Tramp live-action remake that premiered on Disney+ earlier this year.

Pete’s Dragon helmer David Lowery, who co-wrote the script with Toby Halbrooks, is set to direct.

Production is expected to begin this Summer in Vancouver, Canada. As of now, there is no official release date for Peter Pan, but we hear the studio was aiming for a 2021 theatrical release before the COVID-19 outbreak. (Variety)

■ J.K. Rowling, under fire in frequent weeks for airing her transphobic views on social media, has joined dozens of other mostly writers and academics in an open letter denouncing (without naming it as such) “cancel culture.” (Towleroad)

■ Billie Eilish was so obsessed with Justin Bieber her parents considered therapy sessions for the teenager. Her mother Maggie revealed she and her husband were very concerned about their daughter’s crazy love for Justin. (Billboard)

■ Mary Kay Letourneau, who married a former student she was convicted of raping, has died at the age of 58 after cancer battle. (Evil Beet Gossip)

■ Reality star Teddi Mellencamp took to Instagram this week to reveal that her daughter Dove, 4 months, will need to undergo neurosurgery. “Dove was diagnosed with Lambdoid Craniosynostosis and has to undergo neurosurgery at the end of the month. We are so grateful to have an amazing team of doctors and surgeons who have caught this early and will be working on her.” (People)

■ American Idol finalist Chris Sligh has COVID-19 and has developed pneumonia. “I have COVID that has developed into pneumonia,” he revealed in an Instagram post. (Billboard)

■ Thandie Newton has shared her experience on her extremely difficult time shooting with Tom Cruise on the sets of Mission: Impossible 2. “I was so scared of Tom. He was a very dominant individual. He tries super hard to be a nice person.” (Celebitchy)

■ Bella Hadid is slamming Instagram for removing her father Mohamed‘s passport photo that she posted on her personal account. Originally, Bella posted the photo to show her Palestinian pride with the caption, “I am proud to be Palestinian.” (Just Jared)

■ If you weren’t aware, Diane Keaton is obsessed with hats.