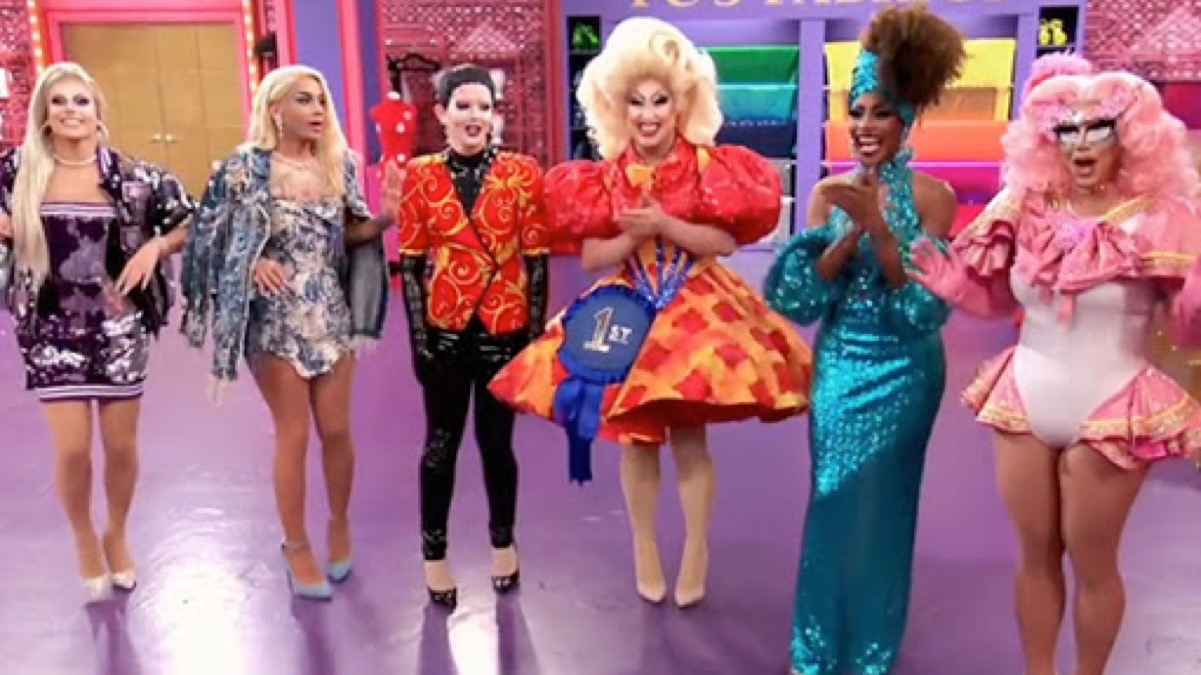 The queens of season 12 have been all over the media this past week, giving us lots of opportunities to get to know them a little better. Here, they play a game of “Guess that Queen.”

If you were curious about the audition process for Drag Race, the dols share their experiences with Jezebel.

There’s so much more with this talented and entertaining group. The queens grab random questions from MTV’s fishbowl, spill some behind the scenes tea and share lots of secrets.

Ru and Jamal Sims, the co-director of the RuPaul’s Drag Race LIVE show in Las Vegas, talk to ET about Nicki Minaj’s judging skills, the Vegas revue and the upcoming Celebrity Drag Race.

Gigi Goode chats with the AV Club about her first time in drag, learning how to apply makeup and offers sage advice for aspiring queens (and talks about her Mom’s fashion influence.) She also shares her obsession with American Horror Story.

Gigi also talked to Access Hollywood about learning and growing as a drag queen and performing as an underaged performer, her reaction to guest judge Nicki Minaj her appreciation for her fans and gives props to Ben Delacreme and Violet Chachki.

And more from Gigi! Here she discusses where she was when she got the call that she had been cast on Drag Race, her preparation for the show, having a Mom in the costume design industry and shares how she came up with her Scottish-inspired reveal look.

She made quite the entrance on Drag Race and has already proven to be a talented queen and now Rock M. Sakura serves up some spot-on impersonations of her season 12 sisters.

“The Pit Stop” is back with Bob the Drag Queen as the new host. This week Bob and Sasha Velour recap the season 12 premiere. I want Sasha’s (are they) earrings?

A new season brings us more of two of our favorite fashionistas. Raja and Raven are back for another season of “Fashion Photo Ruview.” This week, they take a look at the queens’ entrance looks and toot and boot their runway looks.

Two other queens weighing in on the fits and fashions of the first half of the season premiere are Yuhua Hamasaki and April Carrion on the return of “Bootleg Opinions.”

Nina Bo’Nina Brown pulls no punches and, as always, does it so creatively. The Atlanta queen shares her thoughts on the new season in her latest “Rawview.”

Chicago bar Roscoe’s hosts a weekly Drag Race viewing party, and lucky us, they share it on YouTube and it’s always a hoot. For this premiere, Bebe Zahara Benet and Trinity the Tuck join T. Rex to riff on the episode and spill some tea.

BuzzFeed UK plays “Would You Rather” with some of the queens who attended DragCon UK, including Cheryl Hole, Bianca Del Rio, The Vivienne, Morgan McMichaels and more. Find out if Mrs. Kasha Davis would rather be picked up by Mimi Imfurst or slapped in the face by Asia O’Hara.

Trixie Mattel dropped the video for the song “Jesse Jesse” from her new album Barbara this week. In it, Trixie performs her ode to actor Jesse Eisnberg in front of an audience of dolls.

Trixie and Katya talk bathroom stuff, awards and acceptance speeches and losing on the latest installment of “UNHhhh”. We also discover that Katya is a Gen Xer (just like me!)

If you can’t get enough of Trixie and Katya (and, really, who can’t?) the pair take down the Netflix British reality series Glow Up on a truly hilarious episode of “I Like to Watch.”

Jaymes Mansfield is back with another installment of “Wig Warz”, pitting Milwaukee queens Dita Von and Marbella Sodi against each other. The dolls have 45 minutes to make the most of a Party City wig. Who will prevail?

Alyssa’s Secret facing fear talks about what scares her spiders and snakes dealing with and overcoming fears including her own stage fright – can you believe she was ever afraid to be on stage?

Two queens I would love to kiki with are Kim Chi and Trixie Mattel. Since that will probably never happen, I have this video where the queens talk about makeup (as they are both pretty much top of the game) and so much more.

The eternally kooky Tammie Brown has some new music and, in typical Tamoe fashion, an equally eccentric video. Check out her 80s inspired video with Karen from Finance for her new song, “In My Blood.”

Remember season 4’s Madame LaQueer? She’s back and shows Cosmopolitan how she creates her glamorous look.

Kimora Blac creates her own RuPaul red white a blue promo-inspired look and, along the way, she toots and boots the season 12 queens’ looks, discusses the elections and her take on politics.

Kimora and Derrick Barry serve up some Monica Lewinsky and Marilyn Monroe inspired looks as they are quizzed on their knowledge of US first ladies on “Wait, What?”

Makeup artist Nicky Andrea demonstrates his talent on Willam on “Paint Me, Bitch.”

A lot of beauty influencers have reviewed Jeffree Star’s new Blood Lust eye shadow palette, but I tend to trust the opinion of Ariel Versace. She creates a stunning look and talks about the pros and cons of the new collection.

The adorable Sum Ting Wong from Drag Race UK is back – and in this video, she lets her (equally adorable) boyfriend lose his “makeup virginity” apply everything from foundation to lipstick on her. He didn’t do a terrible job and the video is so cute.

Eureka O’Hara has a web series called “Big Girl Problems” ad on this episode, she hijacks her friends’ – including Kahanna Montrese’s – phones and checks their Grindr pics, posts and responses.

Well, that wraps things up for his week! We’ll be back again with more news from the drag universe – and find out who was the first queen to sashay away on season 12 – next week. Until then, everybody say LOVE!