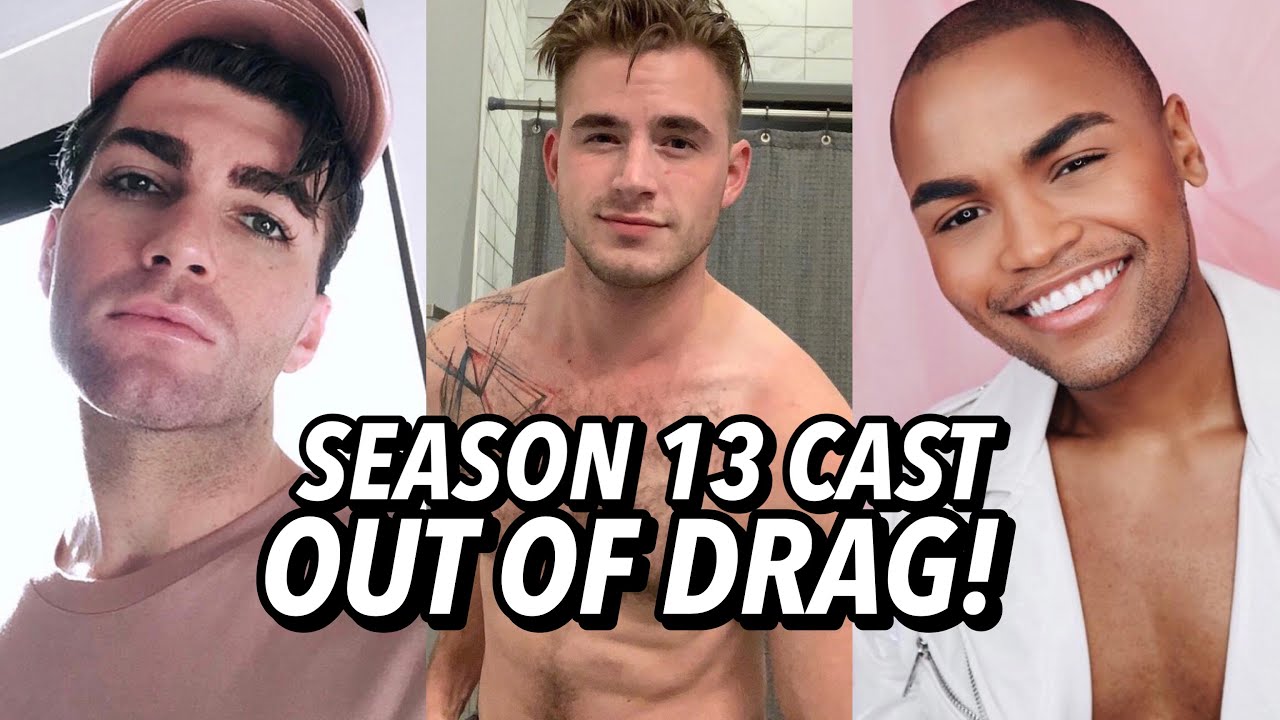 Hello, hello, hello! Welcome to another news-packed The Week in Drag, with music and more from your favorite queens!  This week, we welcomed 13 new queens into the RuPaul’s Drag Race family – and they look as amazing in drag as they do out of it. With Christmas only a few weeks away, we’re filling your stocking with lots of holiday treats from BenDeLaCreme, Coco Peru, Miz Cracker, Jujubee, Ginger Minj and Nina West. We’ve also got laughs from Trixie and Katya and Willam, an epic interview with Dolly Parton and new music from the UK’s own Frock Destroyers. We’ve got lots to see and hear, so let’s bring it to the runway!

Of course, the biggest news of the week is the Ru-veal of the queens of RuPaul’s Drag Race season 13! This is truly a season of firsts, with the show’s first queen from Arkansas, the first Dominican queen and Gottmik, the first out trans man to enter the werk room. Along wth Gottmik, the other fierce queens competing for the crown are Denali, Elliott with 2 Ts, Joey Jay, Kahmora Hall, Kandy Muse, Lala Ri, Olivia Lux, Rosé, Symone, Tamisha Iman, Tina Burner and Utica Queen. The show was shot during the pandemic, with massive safety precautions in place. Said Ru, “Competing safely and fiercely, our 13 queens proved that it takes more than a global pandemic to keep a good queen down.” RuPaul’s Drag Race season 13 will premiere on Friday, January 1, 2021 at 8:00 p.m. ET/PT on VH1.

If you think the new queens look amazing in drag, wait until you see what they look like out of drag. Oh, Joey Jay and Rosé…

The always stunning Kimora Blac shares her first impressions of the season 13 queens.

RuPaul sat down with the legendary Dolly Parton for an interview in the December issue of Marie Claire and it’s everything you expect it to be. On the topic of wigs, Dolly told Ru, “See, you’re a drag queen. Those are like costumes to you. This is my living self. I am a living drag queen. You dress up just now and then, but for me, though, I like the wigs and I wear them almost every day.” Among Dolly’s other words of wisdom, she admits that, “I really, truly love people. I try to find the good in everybody. I try to find the God light in everybody. I’m so happy that I’m touched and moved by so much that goes on in this world that I can actually write about it.” We love you too, Dolly.

This past week, the 2020 Wowie Awards ceremony was held virtually, celebrating the top achievements in entertainment, activism and more. The event was hosted by Heidi N Closet and Vanessa Vanjie Mateo and featured appearances from the 2020 champions, Drag Race UK’s The Vivienne (resurrecting her frighteningly accurate impersonation of Trump), Jaida Essence Hall (season 12), Shea Coulee (All Stars 5), Priyanka (Canada’s Drag Race), and Envy Peru (Drag Race Holland). A bunch of Drag Race alums made the winners list including Beauty/fashion winners include Trixie Mattel, Nikki Doll, Heidi and Gigi Goode in the beauty and fashion category, Miz Cracker and Priyanka in comedy, Brita in news and politics and the Frock Destroyers, Peppermint, Jujubee and Jan in music.

The “Queen of Christmas”, Nina West, is back with a new animated Advent Calendar-themed video for her song “Santa Will Be Gone” featuring the Columbus Gay Men’s Chorus VOX Ensemble from her debut Christmas EP “The West Christmas Ever!”. About the new video, Nina says, “I love the holiday season so much and ever since I was a kid, I would always try to carry the magic of Christmas through the rest of the year.” She adds, “This song, I think, really helps speak to that idea of ‘perpetual hope’ and kindness. We really need it now more than ever.”

After you watch the video (and you definitely should), you can win a one-of-a-kind Nina West holiday-themed prize package featuring a Nina West box filled with a $100 gift card to the NinaWest.com store, a signed and personalized Christmas card from Nina, an ornament from Nina’s personal Christmas tree, and a t-shirt signed by Nina. This one of a kind prize package can be won by watching the “Santa Will Be Gone Video” and answering a question correctly at LINK. Enter before midnight on December 14th to be eligible.

Another queen who is helping spread cheer this holiday season is the amazing BenDeLaCreme. She discusses her latest holiday special with Jinkx Monsoon and talks about her life and career with Joseph Shepherd on the latest “Exposed.”

Ben and Jinkx Monsoon are going to be guests on Coco Peru’s last Casa Coco special of 2020. “A Merry Casa Coco” is coming up on Thursday, December 17th at 8pm EST with a replay at 10pm EST. Tickets are available on a “pay what you can” basis and are available at CasaCoco.live.

If you need more holiday music, check out the latest from Miz Cracker, who has gifted us with two festive (and catchy) tunes this week. “Eight Days of You” features Miz Cracker and Jujubee singing about friendship and in the video, they rock some adorable onesies. About the single, Cracker says, “Working with Juju is a holiday gift. This year has been such a dumpster fire, we’re all looking for some positivity and light—and for me that comes from Juju. I just wanted to make this song to let the world know about what she means to me, in the silliest, happiest way possible. Any excuse to spend time with her!” Jujubee states, “Writing and recording with Miz Cracker was an absolute treat. I’m so excited to be a part of “Eight Days of You”, because the song will really warm people’s hearts. It’s exactly what the world needs. She’s my wifey, I’m her lifey. Seriously!!!”

The cookies featured in the “Eight Days of You” were the star of a photo shoot, which Miz Cracker documented in this episode of “Normal Stuff in Drag.”

Also this week, Miz Cracker (who is one busy queen) released the video for “Get Me the F%#$ Out of Here”, where she  sings about all the worst parts of getting together with family and tells a story that will ring true for far too many of us. Cracker explains, “For Get Me the F%#$ Out of Here, I wanted to make a video that was all about pure fun with my friends. My lady Desiree Browne, drag daughter Juicy Liu, Noah Fecks’s studio—everyone was a blast to work with. I didn’t want to get the F%#$ out of there!” Even drenched in gravy, Miz Cracker is a beauty – and this video is just a lot of fun.

Ginger Minj released an animated video for her cover of the holiday classic “Winter Wonderland” featuring Gidget Galore. In the clip, which is reminiscent of the specials a lot of us grew up with, Ginger said, “I may be from Florida, but I always think of snowmen, ice skating and the old Rankin-Bass claymation specials when it comes to the Holidays. I think everyone does. Since it’s been a crazy year and an unusual holiday season, Gidget and I wanted to bring all of that nostalgic wintery goodness to the comfort and safety of your home!” You can listen to the track here.

Trixie and Katya hosted the YouTube “Streamys” this past Monday and Trixie Mattel shared how she was able to get award-ready in a snap in this video. She looks better than I do and it took her less time. Color me jealous.

The fourth season of the animated comedy Big Mouth recently debuted on Netflix. This show has been in my queue forever and now I am going to have to put it on the must-see list after Trixie and Katya featured it on the latest “I Like to Watch.”

Katya is ready for love and she talks about her elusive perfect man, dating, signature perfumes and a wealth of hilariously random topics with Trixie on this episode of “UNHhhh.”

Monét X Change is back with another episode of “The X Change Rate”. She talks about life in London and welcomes special guest Courtney Act.

Miz Cracker has joined the world of podcasts with her latest effort, “She’s A Woman.” Every Monday Miz Cracker will start your week off by talking with incredible women from around the world about their achievements. Featuring interviews with detectives, pilots, bookstore owners, comics and more. Each show asks a new guest: What is it like to be a woman in your field? In the world? And what are some life lessons that every listener should hear?

The podcast show includes: some good news for the week, an interview with a special guest, and information about the upcoming “She’s a Woman” 2021 Tour. The premiere episode features guest Jeannine A. Cook, who is the founder and owner of Harriett’s Bookshop in Philadelphia, named after her personal hero, Harriet Tubman. The bookstore amplifies the voices of women, people of color, and promotes new understandings of gender and sexuality. It has been hard hit by Covid like many small businesses, but it has stood its ground and won loving support from its community.

We also were treated to a double dose of the UK’s latest supergroup, The Frock Destroyers. Baga Chipz, Divina Del Campo and Blu Hydrangea give our eyes and ears the royal treatment in the video for their song “Her Majesty.”

This week also saw the release of the single “Big Ben” with a fun, animated lyric video.

Baga, Blu and Divina take “The Most Impossible Drag Race Quiz” and answer questions about their season of Drag Race UK.

Violet Chachki is a walking pin-up girl, so it’s no surprise that she has put together a sizzling calendar for 2021. Here she takes us behind the scenes for the photoshoot. If you want to guarantee at least one thing about 20201 will be satisfying, order one of her calendars. https://www.youtube.com/watch?v=PmElyFWG6rg

Another Atlanta queen, Trinity K. Bonet, ranks Alyssa Edwards’ runaway looks from RuPaul’s Drag Race and All-Stars.  Which fashions got a heel and which got a flat?

Willam has devoted the latest episode of “Beatdown” to our four-legged friends. In this animal edition of her series, she takes on the world’s hardest working camel, a dog who fails his service test, rhino and lion vs car, fighting moose, talking birds and a loud llama.

If your New Year’s resolution is to listen to more podcasts, let the shows of the MOM network entertain you. Alaska and Willam (of “Race Chaser” fame) introduce you to “The Chop” with Latrice Royale and Manila Luzon, “Very That” with Raja and Delta Work and “Sloppy Seconds” with Big Dipper.

Jaymes Mansfield is still paying tribute to some of the most iconic hairdos and this week serves up a tribute to the legendary Ronnie Spector. Watch as she creates a gorgeous beehive that makes me miss Amy Winehouse.

That’s it for this week, but I will leave you with one more holiday treat, courtesy of Nina West. Until we meet again, stay healthy, stay safe and say LOVE!