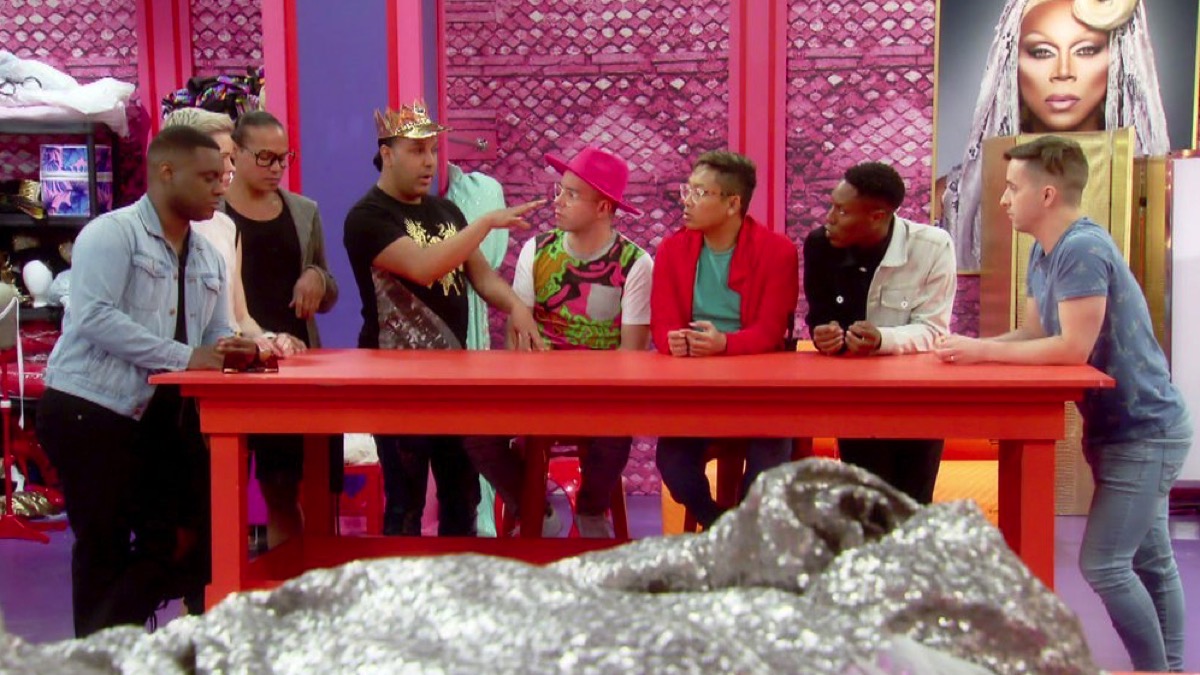 We’re down to eight queens vying to join the Ru Paul’s Drag Race All Stars Hall of Fame and sadly, we had to see the amazing Ongina sashay away.

This week, the queens are tasked with creating their own exotic resort. Will one of the queens create an experience that will be the hotel equivalent of Club 96? Is Miz Cracker still getting the villain edit?

All this and more will be revealed in this week’s Ru-cap. Check out the highlights from this week’s episode.

As it has been this season so far, the show is using it’s Twitter feed not to discuss the show, but to help support organizations that promote the Black Lives Matter movement.

Checking in with Ru

The main challenge this week involves the queens teaming up to create their own 5-star “Ru-tique” suite to be featured on the hotel design show, “Shantay, Enjoy Your Stay.” The randomly assigned teams are Cracker, Mariah and Shea, Jujubee, India and Alexis, and Mayhem and Blair.

The teams meet to discuss their concepts. Blair and Mayhem both like glitter and glamour and decide to go with a gold theme. Jujubee suggests they give their hotel an Alaska theme. I first thought of the season 2 All-Star champ and thought everything leopard would be cool. She actually meant the state, complete with salmon and a pipeline. Oof.

Juju says she wants to win, but is worried because she feels she’s paired with “two bitches with questionable taste.” They settle on a jungle theme and then Juju admits she’s got questionable taste too. That explains this concept much better now. Shea admits that her favorite show is Golden Girls and the team decides to go with a “beachy, 80s Miami” theme.

The teams then work to paint and decorate their rooms and for designers, they’re really good drag queens. Alexis criticizes Juju’s painting skills, implying that’s why her makeup looks the way it does. The highlight of this segment is watching Miz Cracker dancing around in a way-too-big painters’ jumpsuit.

On elimination day, the queens discuss the presentation portion of the challenge. India is worried because she is teamed with two strong performers and is afraid she’s not going to be able to stand out on her own.

Juju says they need to be exaggerated versions of themselves and then says she’s going to shave her face and offers to shave her teammates’ backs. Alexis jokes that they shouldn’t shave their backs, which India said would deliver a “4D experience.” Juju puts a button on the chat by saying they can skip their backs, but “Please, make sure you shave all your chins.”

Blair is trying to hype up Mayhem, telling her that since Miz Cracker isn’t working with them, they are way better off. Mariah is loving her team’s room and they gals all take on Golden Girl-type roles.

And, since we have to have a little drama amidst this camaraderie, Miz Cracker, who has been trying to explain her rationale for saying she wanted to eliminate Ongina in the first episode and has been kind of freaking out throughout this episode, is here to bring it. She tells that she respects and works well with Shea, Mariah and Juju. Period.

This rubs Alexis the wrong way. She asks Cracker, “So, you don’t respect me? Is that what you’re trying to say?”  Cracker says she’s not ready for the “Alexis shark attack” and Shea comes to her defense and says the other queens are piling on her because they see her as competition. The hatchet is definitely not buried here.

The Golden Gals Palace and Resort

It’s time for the queens to introduce us to their “Ru-tique” suites. First up is the Golden Gals Palace and Resort, brought to you by Balenciaga Deveraux (Mariah), Rosebud (Cracker) and Shady Arthur (Shae).

The décor is definitely bringing me to Miami and the room is packed with all of the amenities a Golden Girl would want, including hard candies, a walker (complete with tennis balls and a picture of a random grandchild. Cracker says that while every other hotel has Wi-Fi, the Palace has a landline “with free local calls.” Mariah tells us that the welcome basket is packed with “girthy meats and cheeses” while rubbing a sausage all over one of the Pit Crew guys.

They proceed to entertain their “guests”, Michelle and Ross (looking comfy in their jammies) and serve them some “cream cheese pie.” I love the idea, but they could have done so much more.

Juju, India and Alexius are wearing leopard, so it is a tribute to Alaska after all! The room is a tropical paradise, complete with a mosquito net over the bed and a tiki bar (or as Alexis calls it, the “Pipi” bar – short for “Party, party.”) Juju invites us to “come inside” and then quips, “I’ve said that before.”

The queens punctuate most everything they say with a tiger growl (which is cute) and, in case you didn’t catch the theme, Juju says “We’re wearing leopard print dresses.” India shows off the room’s “golden shower…head” while Juju eats a banana. The welcome basket includes some “Ru-pellant” to ward off the mosquitoes and some tropical fruits.

Michelle and the delightful Nicole Byer enter and enjoy a tropical drink and enjoy the company of the Pit Crew. Juju says, “not only can you pet the pets, but they pet you back” while Nicole rides one of the guys like a pony. Again, cute concept, but it kind of fell flat and poor India wasn’t able to stand out as she feared.

Lastly, it’s time to bask in the opulence of Blair and Mayhem’s (I mean Lamé’s) golden room. It’s extravagant, glittery and so rich that it’s “Daddy rich.” They show off the “selfie chaise” and Mayhem says that among their A-list guest list are the Kardashians (even Rob) and the Jacksons – including Rebbie.

The room also features a “magic mirror” and a welcome basket with golden mist that smells like success, a golden bath bomb and a doorbell that sounds like a slot machine paying off.

Ross and our other judge this week, designer Martyn Lawrence Ballard show up and enjoy a nightcap made from “leprechaun tears and golden goose juice.” They sell this so well that I want to make my reservation now. It’s enough for them to win this week.

The Week in Drag – Ru-caps Ahoy, The Week in Willam, Shannel’s Cut Scene from Celebrity Drag Race and More

She doesn’t get to do much, which is a shame, but Nicole Byer is just such a delight. If you don’t listen to her Drag Race podcast with Mano Agapion (“Drag Her”) you need to and “Why Won’t You Date Me?” is also amazing. Anytime she graces the screen is welcome.

A Triple Threat on the Runway

This week’s theme is “three-in-one” and the queens bring some amazing looks to the runway. But first, let’s take a moment to bask in the gloriousness of RuPaul in a pastel confection of yellow with baby blue and pink accents. (Nicole also looked radiant in pale yellow.) Blair takes on a time travel journey from a 50s housewife to a Twiggy-esque model and ending up in a metallic jumpsuit that would turn heads at Studio 54.

Mayhem gives us a vintage look, as a hotel guest who checks in wearing a lovely jacket which reveals a cocktail dress. She then removes the skirt and is ready for the pool in a sleek swimsuit and bathing cap. Alexis brings it to the big top in a circus-themed look – she goes from being the tent, to a ballerina to a trapeze artist. India is a fantasy in 90s era houndstooth. She removes her overcoat to reveal a pantsuit and then further reveals a bodysuit going from “demure to whore in seconds” (according to Ru.)

Nicole screams “Yes!” when Jujubee takes the stage in a witch outfit, which converts to a sexy Mrs. Claus and ends as a seductive Easter bunny. Mariah came out in a fuzzy coat and a really cool helmet headpiece. She removes them to reveal a LBD that converts to a full-length gown.

Miz Cracker comes out as a Fabregé egg, which converts into an ornate gown, which she removes to reveal a golden bodysuit as a “princess on the run after the revolution”. Lastly, Shea gives us a full caterpillar to butterfly metamorphosis, with a touch of Lisa Frank. Her makeup is stupendous, and she’s even got wings. This was definitely a runway to remember.

While Mayhem and Blair won the hotel challenge, Ru declares Juju to be the top All-Star of the week and awards her a trip to Ft. Lauderdale. With Alexis and Cracker also deemed safe, it’s down to India, Mariah and Shea(!) are in the bottom.

As this week’s winner, Jujubee faces off with this week’s lip-sync assassin, season 4 (co) champion Monét X Change and they couldn’t have a better song to perform, as they take on the Lizzo hit “Juice.”

True to her assassin status, Monét tears up the stage and is serving a fierce performance, one of those where you just want the camera on her the entire time so you don’t miss a move. Since this is a low stakes challenge (and maybe because she doesn’t want to be solely responsible for eliminating this week’s queen?),

Juju kind of phones it in, and it’s obvious that she doesn’t know the words. Monét, not surprisingly, wins, the $10,000 “tip” rolls over to next week and the lipstick reveals that the beautiful Mariah Paris Balenciaga must sashay away. Seeing this former Atlanta queen leave breaks this Atlantan’s heart.

Well, it’s time for us to “check out” until next week. Until we meet again, just remember that if you can’t love yourself, how in the hell are you gonna love somebody else? Can I get an “amen”?