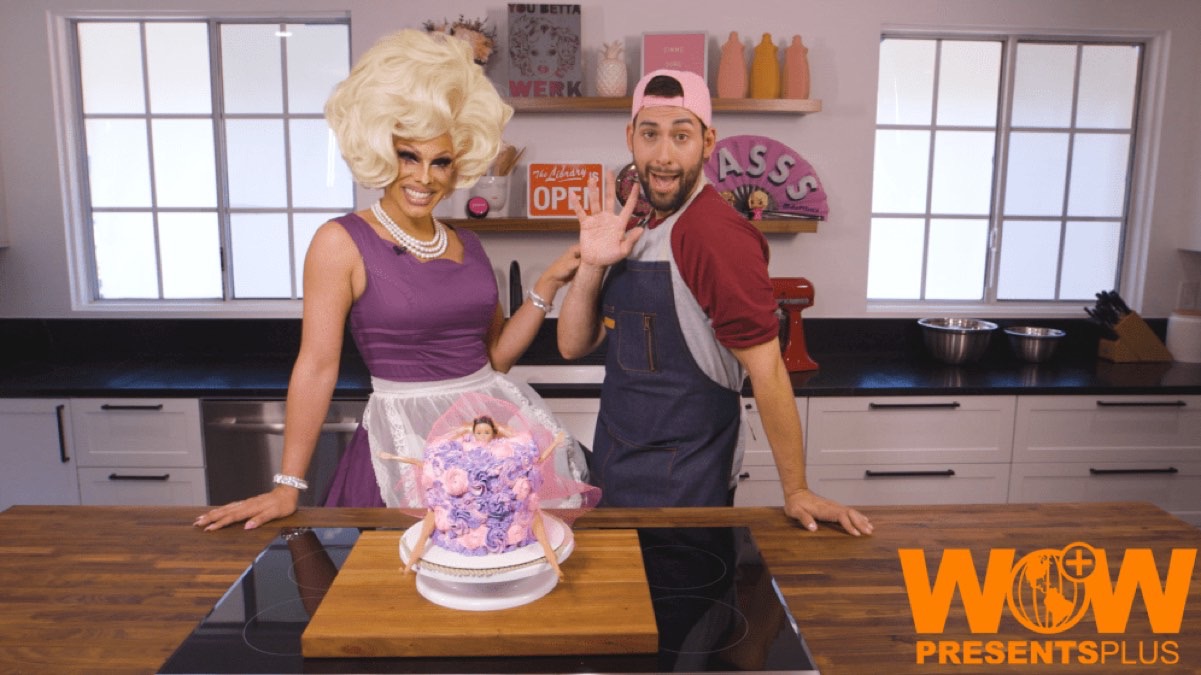 Well, hello, hello, hello! It’s time once again to check in with your favorite RuPaul’s Drag Race queens. As always, we’ve got a lot to report, and, if you’re looking to escape the summer heat, we’ve got some cool videos to keep you company in the air-conditioned comfort of your living room (or wherever your favorite video watching spot may be.) Let’s get started!

On this week’s “Drag Her”, the incredibly handsome and spiritual Jeffrey Bowyer-Chapman, who you might remember from UnREAL (and recently chatted with Ru and Michelle on “What’s the Tee?”) joins Mano Agapion to talk about Willam and Alaska serve up another edition of “Hot Goss” and revisit Drag Race season three’s stand-up comedy challenge on “Race Chaser”, where, sadly, we had to say goodbye to Delta Work. (But hey, she may not have taken the crown, but she did win an Emmy, so there’s that.) Catch up with the dolls on Forever Dog.

Cheap plug alert! Socialite Life is making news in the world of drag this week. Learn more about some of our favorite drag-related podcasts and check out our exclusive interviews with “Drag Her” host Mano Agapion and “It’s a Mess” co-host Cazwell.

On this week’s “Fashion Photo Ruview”, the lovely Mariah and Raven toot and boot the looks of the champions for the show’s even-numbered seasons (including our season two and four All-Stars). Well, there’s Sharon Needles, Bianca Del Rio, Bob the Drag Queen, Aquaria, Alaska, Trinity and Monét X Change...apparently the season two queen is she who will not be mentioned. Cue shade rattle.

Ariel Versace gives us her best Jeffree Star look, recreating their “sunset eye” using products from the Jawbreaker collection, in this makeup tutorial. I love a bright eye shadow and that Jawbreaker palette is everything. And if someone would pick those makeup brushes for me, I would be eternally grateful.

Season 11 champion Yvie Oddly spoke to Access about life after the crown (and, yes, she does address her recent Twitter rant). She also shared that she looked forward to showing off her goofy side on the tour and talks about her Pretty Weird Tour with fellow season 11 queen Plastique Tiara.

One of the sweetest queens to come out of season 11, Shuga Cain, debuted her new series on Wow Presents Plus this week. “Gimme Some Shuga” pairs the titular performer with baking aficionado Justin Salinas from “Cake it With Justin” as they recreate some of Drag Race‘s most iconic runway looks as frosted delicacies. On the first episode, they pay tribute to the floral and Barbie-themed ensemble that resulted in Vanessa Vanjie Mateo sashaying away and becoming a viral sensation.

Tongue pop alert! The iconic Alyssa Edwards is the subject of the latest episode of “Werq the World” on WOW Presents Plus. She is one of those performers I cannot take my eyes off of, and she is as fierce on stage as she is lovable off stage.

Katya and Trixie continue their discussion about secrets on this week’s episode of “UNHhhh.” Find out which one of them can’t keep a secret and doesn’t understand the meaning of an NDA and which one has tried Botox. It’s no secret that this is my favorite WOW Presents show and I hope these two take this show on the road.

The theme of the latest episode of Jinkx Monsoon‘s web series, “Cool Mom”, is “dreams.” Jinkx looks back on her childhood dreamland nemesis “Scratchybug” and her son, Kamikaze shares some nightmare fuel that I am sure some of you can relate to. Which one of these two had nightmares about a character from Pee Wee’s Playhouse? You’ll have to tune in to find out!

On the latest (rather NSFW) episode of “Beatdown”, Willam shares a video of the worst makeup artist in Dubai and her poor victim, takes us back to the days of MTV’s awful dating series Next, and witnesses the dizzying rescue of an elderly hiker. Side note: Willam’s tank top is everything. I need one of them, stat.

Real Housewife of the Potomac’s Katie Rost (don’t ask me who she is, I have never watched any of the RH shows) joins Derrick and Nebraska on the latest “ASMR Queens”. I love Derrick and Nebraska, but I just can’t get going with this – but I am here for all of you who do love this trend.

The fierce and fashionable (and self-proclaimed “geek”) Violet Chachki talks with “style superstar” Naomi Smalls for a “Runway Rewind” revisiting legendary designer Thierry Mugler’s Spring/Summer 1992 runway show which they dub “the height of couture.” Come through, Dianne Brill! There’s also an appearance from Dee-lite’s Lady Miss Kier. If you lived through 90s fashion, this is a fun walk down memory lane.

With “Drag Her” revisiting season one of All-Stars, it made me miss the queen best known for walking children in nature, the kooky Tammie Brown. If you’re like me and just can’t get enough of this eccentric and always entertaining performer, you might be delighted to know that she has her own digital series, “The Browns Starring Tammie Brown.” The series’ third (!) season was released on YouTube this week and it features appearances from such beloved Drag Race alums as Pandora Boxx, Ongina, Raja, Mrs. Kasha Davis and a queen who is definitely deserving of a “ru-demption”, Kelly Mantle. It’s a fun and crazy way to spend a half-hour, trust me.

That should take care of your Drag Race fix for the week, shouldn’t it? Until next week, everybody say LOVE!